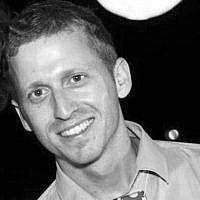 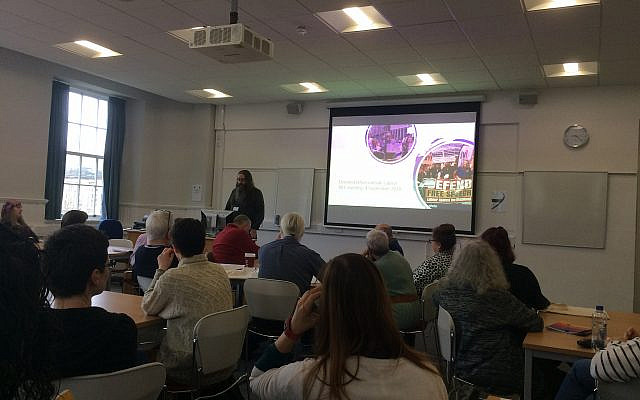 from Limmud session 'Choose Your Jew: The Rise of Selective Anti/Semitism ', by Keith Kahn-Harris (taken by Matan via Jewish News)

Two weeks ago, I was honoured to participate in Limmud Scotland day, which took place for the 9th time and for the first year in Edinburgh. It was an amazing opportunity for me and for the over 200 people who attended, to learn about this fascinating Jewish community, which I started getting acquainted with earlier this year by participating in a dialogue programme between Jews and Christians on antisemitism, organised by Interfaith Glasgow.

Looking at the programme of Limmud after arriving there, however, I was a bit struck to find  that 38 of the 39 sessions in total dealt with anything Jewish besides Israel: Klezmer and Yidish were by far the most common themes in this year’s program. What was blatantly lacking was Israel and the conflict: only 1 session dealt with the conflict, and was “more of the same” according to some who attended it. I was, and am still asking: Is 1/39 (2.5%) representative of the extent of concern that Scottish Jews have for the future of Israel?

I am definitely not an Israel-centrist who thinks it’s all about us, but I was imagining the the pro-Palestinian past events in Scotland would make this issue at least a bit more of a priority for Scottish Jews. In Limmud South Africa for example, a country which downgraded relations with Israel earlier this year,roughly 10% of the programs included sessions about Israel and the conflict.

But this is not even the tip of the iceberg of what happened in Limmud Scotland. one speaker, whose session “why Jews should know about the Nakba?” had already been accepted as part of the programme, was disinvited by the organising team.

Back in the opening remarks of Limmud Scotland, I raised an eyebrow when I heard one of Limmud founders stating that “today, there’s a choice for everyone… different Jews want/need different things”.

This isn’t the first time this happens in Limmud. Last year in Limmud South Africa, three speakers were disinvited from the programme, following an outcry from parts of the community. There was tremendous communal pressure from the Herzlia school, which stated that if the speakers are not disinvited Limmud will not be able to  use their Venue. Similarly, the kosher Caterers threatened to withdraw their Service in such a case. The Limmud team had “no choice” but to hear “the community’s cry, and it led to the very painful decision to cancel the speakers.”

In Limmud Scotland the question I was seeking an answer to is whether the “pressure” came externally or not. Whether there are different narratives, or rather a different interpretation to what pressure means.

According to one narrative, some pressure was put on to make sure the speaker was disinvited because of his support for BDS. Many of those who attended Limmud, found out about it by reading the following pamphlet, called ‘Who Polices Heaven’s Arguments?’, which was disseminated at the end of the Limmud day. 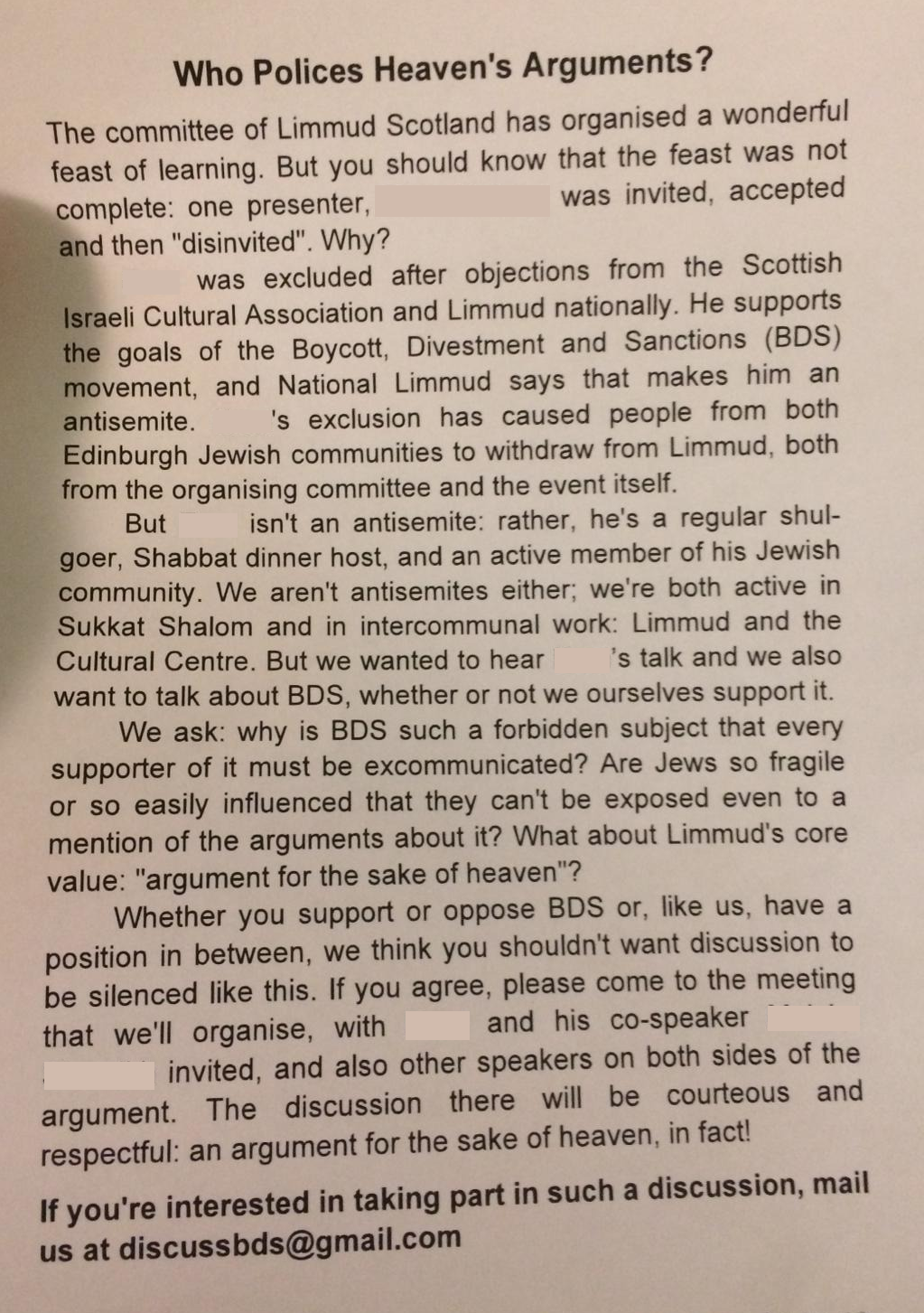 The pamphlet which was distributed

The pamphlet explained that the speaker was excluded “after objections from the Scottish Israeli Cultural Association (SICA) and Limmud nationally” and that “He supports the goals of the BDS movement, and National Limmud says that makes him an antisemite.”

The pamphlets later discussed the speaker’s Jewish “credentials”, aiming to refute the above mentioned claim, and the writers’ legitimate right to talk about BDS, “whether or not we ourselves support it”. It later asked: “Are Jews so fragile or so easily influenced that they can’t be exposed even to a mention of the arguments about it? What about Limmud’s core value: argument for the sake of heaven?”

While many were happy this voice was raised at the end of Limmud day thus avoiding drama during the learning conference, some saw it as slanderous, denying there was pressure by Limmud national or SICA.

SICA, an organisation “committed to inspiring, developing and celebrating the diverse cultural heritage within the Israeli and wider Scottish community and fostering Participative Democracy for all”, had a member in Limmud’s commission team. Based on their reservations on the speaker’s association with BDS and some tweets by the Palestinian speaker who was supposed to present with him, they informed Limmud Scotland they  cannot “promote or endorse an event that gives a platform to speakers who their organisation believes alienate and hurt the vast majority of the Israeli community in Scotland”, as written in their email to Limmud Scotland.

“They (the BDS) make our lives difficult. We struggle to even throw a Hanukkah party”, an Israeli living in Scotland and a member of SICA told me when I asked about the pamphlet. “I don’t see what happened as pressure. There was a discussion and a decision made.”

For a member of the Limmud team I spoke with, the message which came from SICA was clear. “SICA would withdraw its support from the event and basically boycott Limmud Scotland. For me that means pressure.”

It’s understood why Limmud Scotland minimised the volume of sessions dealing with Israel and the conflict. It’s too controversial and divisive. Klezmer is a much easier theme to bring people together with. But what is the price the Jewish community pays for excluding specific voices, and how does it affect younger Jews, who are critical of the Occupation and of the Israeli government’s policing of beliefs?

Those who put on pressure so that people who support BDS are disinvited, be it in Scotland or South Africa, whether they aim to or whether they don’t – draw a line of who’s part of the Mishpacha, and who isn’t. Limmud organisers, Limmudniks in Scotland, South Africa and worldwide: do you accept that?
But then, Who’s next?