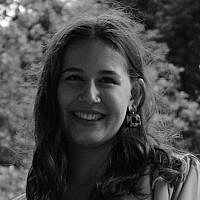 The Blogs
Rachael Stone
Apply for a Blog
Advertisement
Please note that the posts on The Blogs are contributed by third parties. The opinions, facts and any media content in them are presented solely by the authors, and neither The Times of Israel nor its partners assume any responsibility for them. Please contact us in case of abuse. In case of abuse,
Report this post.

Last Sunday evening, I heard multiple rounds of machine gun fire. I hurriedly texted my friends who also live in Lod, asking if they had heard the shots too. They did. I then googled “Lod Shooting” to see if there was any reporting on what had just taken place. The week following I kept checking to see if anything was reported on the shots my friends and I heard. Nothing.

When people asked me if I felt safe living in Lod, I usually said yes. I would explain that yes, there’s a lot of violence and shootings, but it’s only between crime organizations or because of family feuds. This helped me sleep at night, knowing I would never be a target of the frequent shootings around Lod. But I still hear the shots. I still see the headlines, and it feels like the violence is getting closer and closer to home. I asked one of my friends who has lived in Lod for a few years whether this was true or just my perception. He affirmed that there was an uptick of violence, and that it started to seep out of the exclusively Arab neighborhoods and into the center of Lod.

Why was I only concerned when it started to make me feel unsafe? Arab society is still very much part of Israeli society, and we all live in Israel. The idea that violence in the Arab sector doesn’t impact me because I’m not Arab is untrue and naive. Just last week a 4 year old boy was killed, he was completely innocent but still was a victim of violent crime. Metaphorically and literally, stray bullets always manage to reach innocent bystanders.

In the past, Jewish politicians liked to believe that crime and violence in the Arab sector should not concern Jewish Israelis, but in fact, it should concern us all. Especially in mixed cities like Lod, Arab citizens’ needs fall through the cracks when it comes to budgeting and planning, which leads to Arabs in mixed cities feeling less safe than Arabs in the rest of Israel. The livelihoods and personal security of Arabs should matter to all of us; the destinies of Jews and Arabs in Israel are intrinsically linked.

Since the violent clashes between Arabs and Jews last May, there has been a huge rise in firearm license requests. The issue of increased legal gun ownership is being discussed in Knesset now, but increasing the number of weapons, legal or not, is dangerous, and shows a lack of civilian trust in the police. As Abraham initiatives CEO Amnon Be’eri-Sulitzeanu explained in the Knesset a few weeks ago, the monopoly of force in Israel needs to stay with the police — arming civilians would lead to war and even more violence.

At the same time, the police force needs improvement, and it needs to increase civilian trust. When it comes to testifying in front of the police, only 13.5% of Arabs in mixed cities say they would be likely or very likely to testify if they were an eyewitness to a shooting according to the Abraham Initiatives Personal Security Survey in 2019. This could be partly because of a lack of witness protection, or because of the wide reach of Arab crime organizations into the lives of those in Arab society.

The solution to the complex issue of crime and violence in Arab society goes deeper than just fighting the symptoms. Fighting the cause means digging deeper, increasing funding in Arab schools, making civil resources more widespread in Arab society, and increasing trust in police and in the state. The approval of 2.5 billion NIS to fight crime in Arab society is a step towards a solution. The cohesive plan allocates money to improve law enforcement in the Arab sector as well as towards civilian programs designed to prevent the social conditions and lack of income and structure in which young people turn to crime and violence. The resource gaps between Arab and Jewish society, in mixed cities especially, must be closed, and this plan, which includes many recommendations from the Abraham Initiatives, aims to do just that.

About the Author
Rachael graduated from the University of North Carolina in 2020 with a degree in political science and peace, war, and defense and studied Arabic. She is currently a Yahel Social Change fellow and lives in Lod, Israel, where she volunteers to teach English in primary schools and to Eritrean refugees. She is also an intern for the Abraham Initiatives, which aims to create social and political equality between Jewish and Arab citizens of Israel.
Related Topics
Related Posts
Comments