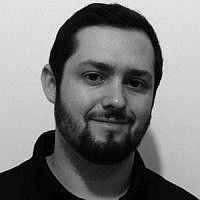 The Blogs
David M. Rosenberg
Apply for a Blog
Please note that the posts on The Blogs are contributed by third parties. The opinions, facts and any media content in them are presented solely by the authors, and neither The Times of Israel nor its partners assume any responsibility for them. Please contact us in case of abuse. In case of abuse,
Report this post.

By most measures, Israel’s economy is booming. Inflation is non-existent. Household real income is up among all income groups, while unemployment is down to the lowest level in a quarter century. GDP growth was a robust 7% in the last quarter of 2014.

But there are two indicators that deviate from this otherwise rosy picture. The first is well-known. While the Consumer Price Index for non-housing costs – a key measure of inflation – has actually been in decline, the cost of housing has soared. From 2008 to the present, the cost of housing units has risen almost non-stop, nearly doubling from January of 2008 to January of this year, even as prices of most other goods remained stable or declined. The last time real estate prices skyrocketed at this rate was in the early to mid-1990s, when the price of housing more than doubled between from 1993 to 1999, before falling again as a result of the Second Intifada. 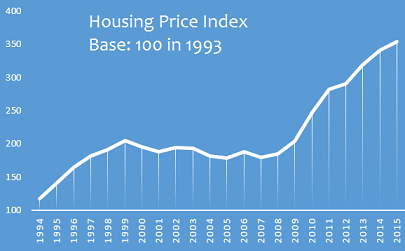 The second indicator, which is generally overlooked, is the Bank of Israel interest rate. After four years of decline, the Bank stunned observers by lowering the rate yet again to a record low of 0.1%. That’s a historic low not only for Israel, it’s lower than the rate set now for America’s ongoing “quantitative easing” following the Great Recession, which is itself the lowest rate in American history. Why are the Bank’s easy money policies troubling? The interest rate creates incentives for investors and borrowers alike. High interest rates encourage savings and discourage speculators and others from taking on new debt in order to make a gamble on a new investment.

Low rates, on the other hand, make saving money less appealing, since the return on bank accounts is very low. Those same low rates encourage investors and speculators to borrow money to invest in businesses and commodities. Typically, a country with low unemployment and strong economic growth won’t push rates continually downward, certainly not down to nearly zero.
These two indicators – the cost of housing and the interest rate – are actually interrelated, at least partially. Usually, years of easy money policies by central banks result in rising inflation rates. Yet as Israel has cut interest rates, inflation has remained nonexistent. That’s because rather than flooding the markets, a large portion of that money has been used to buy up real estate, creating a bubble.

Like the easy money policies of the US prior to the housing market collapse and subsequent recession in the US, other prices have remained stable and inflation deceptively low while prices in one market – real estate – have surged out of control. With conventional outlets for savings and investment like banks giving pitiful returns due to the low interest rate, investors – including speculators – have turned to the one consistently high-return investment in the country, and have bid up prices on land, building materials, and housing units.

The solution is simple: a gradual return to a responsible interest rate of 2-3%, as prevailed prior to the wave of rate reductions beginning in late 2011. Of course it won’t eliminate the high prices, which are cause in part by tight government control over most land in Israel and the high tariffs on building materials. But returning to a moderate monetary policy will arrest the rapid rise in housing prices and prevent the bubble from getting any worse. So why don’t the government and the Bank of Israel pursue such policies?

As is generally true with political leaders, there is little incentive to be the fall guy who has to make the economy come back down to earth. It’s far easier to kick the can down the road, to enjoy the short term benefits of easy money – like reduced imports and greater exports – than be the one who has to impose the costs of having a long-term healthy economy.
The short term benefits occur while the politician is in office but the long term benefits of clamping down on interest rates could take years to be fully felt. And the pressures to maintain a weak dollar vis-à-vis the Euro and the Dollar are fierce. Many moneyed interests, from exporters and domestic industry to hotels and the tourist industry, all rely on a weak Shekel to attract foreign customers.

Most distressing of all, there is little if any pressure from the public on the government to tighten monetary policy. Moshe Kachlon’s Kulanu party won a respectable 10 seats running on the pledge to bring down the cost of living by fighting big business market manipulation. Yet even this supposed crusader for the middle and lower classes fails to address the glaring inequities of Israel’s absurd monetary policy and the financial difficulties it creates for families seeking to buy homes.

About the Author
David Rosenberg is a freelance writer and political commentator. He holds an MA in Israeli Politics and Society from Hebrew University. A California native now living in Israel, he also promotes joint Israeli-American educational ventures.
Related Topics
Related Posts
Comments