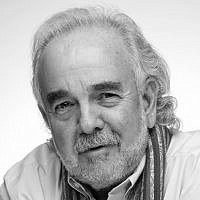 The Blogs
Peter Geffen
Apply for a Blog
Advertisement
Please note that the posts on The Blogs are contributed by third parties. The opinions, facts and any media content in them are presented solely by the authors, and neither The Times of Israel nor its partners assume any responsibility for them. Please contact us in case of abuse. In case of abuse,
Report this post.

Once the only city with a Jewish Majority in the Islamic world, on Friday night March 25 we were the only Jews in Essaouira. Or were we? Who was gathered for Kabbalat Shabbat, in the elegant little Synagogue of Bayt Dakira, the House of Memory in the heart of the medinah of this beautiful city along the Atlantic Ocean in southern Morocco. Yes, the 44 students and staff of KIVUNIM filled most of the seats inside. But surrounding us was a different kind of Jew – the one self-described by El Mehdi Boudra, the Founder of The Mimouna Association as Muslim by religion, Arab by ethnicity, Moroccan by nationality and Jew by history! There were sixteen University Master’s students en route to becoming the first professional guides to the history of Moroccan Jewry – all Muslim. There were the officials of the Essaouira-Mogador Foundation and the Museum itself and the Director of the Museum of Moroccan Jewry in Casablanca – all Muslim. There was the Mayor of the city itself. There were others too of course: journalists, photographers, policemen and some curious on-lookers.

We were the guests of the Honorable André Azoulay, Senior Advisor to King Mohammed VI of Morocco and patron of the (Jewish and Muslim) historical restoration of this city of his birth. We were further honored by the presence of Mrs. Katia Azoulay, also a native of Essaouira and their distinguished daughter, Audrey Azoulay, Director-General of UNESCO and former Minister of Culture of France.

Why was everyone so focused on this Kabbalat Shabbat service? There was the magic of a seemingly symbolic-only Synagogue being once again filled with voice, with song, with music, with joy, with spirit! There was the historic experience of women leading the Kabbalat Shabbat service, a second in Moroccan Jewish history only to last year’s KIVUNIM visit to Essaouira. There was the power of young voices singing new melodies to ancient words of Hebrew prayer. There was the spirit of their bodies dancing round and round the central bima of the sanctuary to the niggun of שירו לה׳ שיר חדש  Sing a New Song to Adonai – but there was something else at work, something deeply spiritual, cosmopolitan, and reality-based as well.

When Mr. Azoulay rose to speak you could feel a quiet settle over the crowd as he searched for words to convey the emotion he was feeling. KIVUNIM had brought life back into this space – Jewish life. His words captured the openness of Moroccan culture and society to inclusion, to recognition of the historic presence and contribution of the thousands of years of Jewish life that are an accepted and honored part of contemporary and future Moroccan national life. It was, he said, like stepping back into the past, into a world now gone and yet being relived and revitalized by KIVUNIM’s annual visits. He reminded all present of the years of devoted efforts by KIVUNIM to bring the story of King Mohammed V and his protection of his Jewish citizens from Nazi (Vichy French) persecution to world attention. He spoke appreciatively and with reflection of the KIVUNIM Convocation in New York City in December of 2015 that paid tribute to Mohammed V. He pointed us to the words appearing on the entry wall of Bayt Dakira that quote from King Mohammed VI’s words that night:

On the pews of this Synagogue (Congregation B’nai Jeshurun), in the heart of New York, on the heights of Manhattan, it is the names, the struggles, the victories and the everlasting messages of no less eminent figures than Reverend Martin Luther King, Jr. and Rabbi Abraham Joshua Heschel that are being associated with the tribute paid tonight to my illustrious grandfather, His Late Majesty King Mohammed V. May he rest in peace.

It is in memory of these two icons of the Civil Rights Movement in the United States that you decided to name the Freedom Award you have just created. As its first recipient, you have chosen to honor – tonight and for eternity – His Late Majesty King Mohammed V, the revered hero not only to all Moroccans, but also to all people yearning for freedom and dignity – all of which are deeply rooted in our multi-secular (time-honored) identity (which is) open to the whole world, an identity the Kingdom of Morocco has constantly nurtured by building on the rich, diverse components of its society.

As we walked back to share Shabbat Dinner with the Azoulay family, Mayor Tarik Ottmani, and other dignitaries, the words of the central prayer of Kabbalat Shabbat, the Lecha Dodi manifest in our thoughts:

Wake up! Wake up! For your light has come, rise up and shine!

KIVUNIM’s annual visits to Morocco have provided our North American Jewish students with a vision of the possible. Of a world of mutuality and respect that can overcome barriers so easily erected to separate and divide. Essaouira is known as a windy city with constant ocean breezes that fill one’s lungs with fresh air. How fitting a symbol as we seek to take from our brief visit an inspiration and hopefulness that will guarantee that what we see on our television screens in Ukraine is not inevitable. That it is possible to build cultures and societies that value life and elevate difference. That religious conflict need not be unavoidable. That the words of the Hebrew Prophets are a mandate for the future: “…that nation shall not lift up sword against nation, and people will learn of war no more.”

About the Author
Peter A. Geffen is Founder and President of The KIVUNIM Institute – Building World Consciousness, and Founder of The Abraham Joshua Heschel School in NYC.
Related Topics
Related Posts
Comments