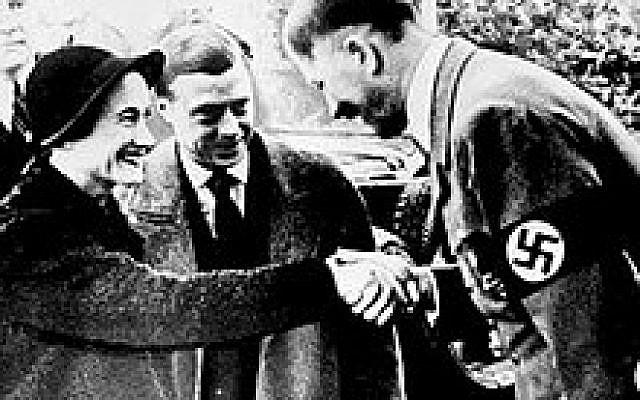 Missing Part of the Guide for TV Interview Watchers

“Racism drove us out of UK” – a quote from the recently carefully planned and calculated interview by a very fitting each other couple to Oprah. 17 millions Americans watchers, probably more, are in shock and full of sympathy, naturally.

The Labour MPs in Britain have jumped on the horse and have demanded an official probe into the racism at the Palace. Of course. Racism claims are a hot commodity nowadays.

Perhaps, those sympathisers have to be educated a bit who is the person who has stated the line so somber-like and self-convincingly. That still young man is the person who sixteen years ago was featured all over the UK and in some US media as well, on the front pages. He was going to party, with a Nazi bandage on the sleeve of his white shirt. And it was not an isolated case. There were reports on Heil saluting by the same person, too. So he knows something about racism, it seems. 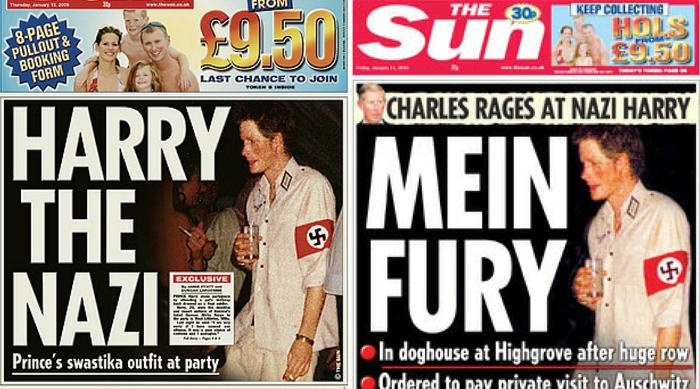 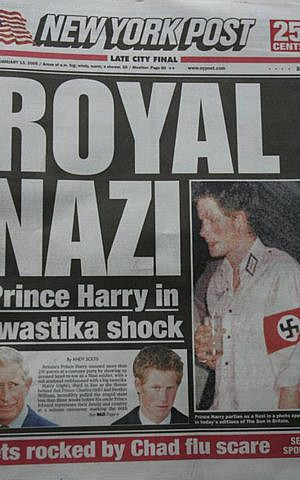 To compare the person’s actions and his words in this case and at this time leads to only reaction: it is simply hilarious. Whoever chooses this kind of outfit for a dressing party is declaring who-he-is. Period. And he is somber-like mentoring his family now choosing to shame them world-wide, for the profit, in that utterly hypocritical exercise for dumb and dumbest.

Next to him is a thriving former barmaid, former B-movies participant ( actress is a profession, so it has to be a distinction) who is having a moment of her life and enjoying every millisecond of it.

Just somebody in a huge Oprah team who was preparing the show, had to read something about the person whose hair, dress and gestures they were appropriated for never-made-it actress on the bench opposite Oprah. Because they have put themselves, their subject, their mighty hostess, and the whole show, actually, in real jeopardy with that choice. 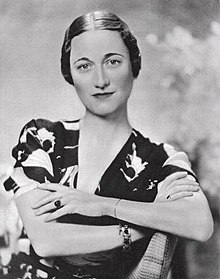 Because – as it was noted in the British press yet before the interview – the copy-catted image was of Wallis Simpson, American socialite who has persuaded Edward VIII to marry her by the price of abdicating. Which was, actually, a blessing for Britain, as it turned out, because having undeterred pro-Nazi sympatizer on the throne at the time of the Second World War would make the job of Winston Churchill much harder. He would prevail anyway, of course.

It would be highly recommended to consult some historian in order not to put the entire operation in such utter embarrassment for those who were responsible in the Oprah team before reviving the Wallis Simpson image 80 years after many of her notorious public and private statements and her multiplied allying with pro-Nazi figures literally everywhere she went. It would be so obvious to read, to learn, to think, to make this probably seen as unnecessary for them exercises of putting one plus one, before copiously cloning and putting in front of multi-million audience today  a person who produces all these lines and hints on racism being 100% in the appropriated image of disgusting personage of the modern history known as Wallis Simpson. So much meticulous effort of all sorts to revive the image of whom?

Just for Oprah team – and for those among the huge international audience who have no clue about who Wallis Simpson was: she was the person who has publicly stated that ‘France has lost ( to the Germans) because it has been infested inside”; she was the person who did choose as the host for her scandalous wedding with abdicated Edward the Portuguese banker who was known to the MI-6 as devoted Nazi sympatizer, appropriator of looted by Nazi art,  and who was close friend and business partner of dictator Salazar.

She was the person who with her husband ran in 1937 to Germany to meet Herr Adolf and to lick his rare part enthusiastically, forgive me a small slip off the protocol. The Simpson and Edward visit to Germany and their cheerful and cordial  meetings with Hitler are very well documented. Just one of many existing photos of the tour  voila: 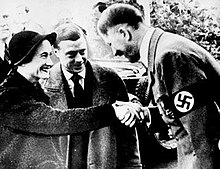 She was the person who has organised the luxury marine tour for her-beloved-self and her husband on a board of an yacht of Alex Wenner-Gren, their good friend and associate and at the same time close personal friend – and business associate of Herr Göring, Hermann Göring. Furious Churchill managed to avert the public disaster with that would be sun-bathing of still Royal couple on the yacht of a pro-Nazi person who was actually banned by the British and American authorities during the WWII for his pro-Nazi activities and dealings with the Third Reich.

Substantial part of these activities were banking manipulations subsidising Nazis via Wallis Simpson’s one of the best and closest friends Wenner-Gren’s bank domesticated  where? In the Bahamas, indeed. In the Bahamas where Simpson’s third husband Edward was put by the British Crown to be the Bahamas governor during 1940-1945. One might wonder why on earth did he step down from that so convenient position on March 16, 1945 when the the Nazi Germany’s utter defeat was imminent? One might, but none of the British historians do not.

I am not going further into that man’s personal relations and existed – before masterly retrieved by the able British ( and it happened, Kremlin) agent immediately after the end of WWII  – highly incriminating letters between him and Hitler. But it is well-known that they did exist.

My point with regard to that stunningly mean exercise on the TV screen aired with such publicity is that the guide for this show for massive TV audience, especially in the States, clearly misses the part in which the audience would be reminded on the episode of the Nazi entertainment costume happily picked up by member of the Royal family who is now making such blatant statements on racism which in his words ‘drove him and his family out of his country’, and about the record of the openly and proudly pro-Nazi American socialite whose image has been picked up for appropriation by another American who is a parody even of a socialite. The audience has its right to know about these historical facts, to make their conclusions.

But of course, this kind of missing part of a guide for TV audiences does not generate such dizzy profit. As we know from history, including the modern one, decency hardly does. That’s why throughout long historical records it is regarded as a luxury. Royals or not.