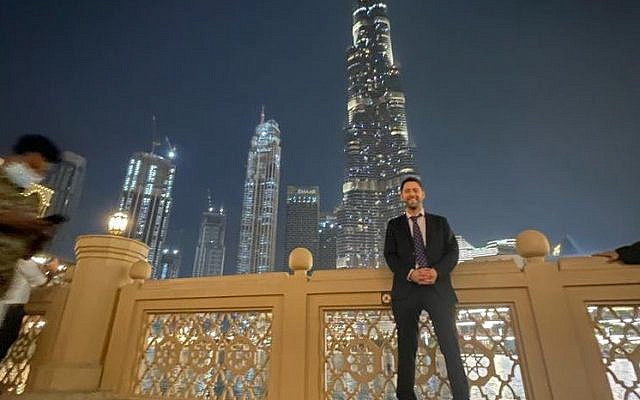 Phil Rosenberg during his Gulf tour

That was my abiding experience while participating in a World Jewish Congress (WJC) and UAE Embassy in Washington D.C. delegation to the Gulf this last week. Just 18 months ago, it would have been inconceivable for 40 Jews from all around the world, some carrying only Israeli passports, to have been openly able to travel around an Arab country, wearing kippot, and not only feeling safe, but welcomed.

And yet that is what just happened. I am part of the WJC’s Jewish Diplomatic Corps, which travelled to the United Arab Emirates to meet politicians, faith leaders, businesses, the nascent Jewish community and even a member of the Emirati royalty, as part of a push to take full advantage of the Abraham Accords, signed between Israel, the UAE, Bahrain, Morocco and (sort of) Sudan in 2020.

Arab hospitality is famously fulsome, but the reception we experienced was on another level. The Minister of Tolerance and Coexistence and member of the royal family Sheikh Nahyan bin Mubarak Al Nahyan went as far as throwing us a state banquet at the Dubai Expo, while leading Emirati parliamentarian and counter-extremism activist H.E. Dr. Ali Al Nuaimi made us the first guests at a -dinner on his newly built ranch on the outskirts of Abu Dhabi. The wonderful Bahraini Ambassador to the UK, H.E. Sheikh Fawaz bin Mohammed Al Khalifa, saw that I was in the region and invited me and fellow British delegate Efrat Sopher to Manama as guests of his government.

The warm welcome was underpinned by a clear sense of mutual self-interest. A world in which Arabs and Jews are neither enemies nor competitors, but rather friends and partners, gives everyone huge opportunities in terms of promoting peace, security, prosperity and exchange. This applies equally in both the Middle East and at home in the UK.

I am still processing one of the most incredible weeks of my life. The @WorldJewishCong #JewishinUAE delegation was a chance to look at all the opportunities created by the #AbrahamAccords. Wonderful to explore these with new friends and old. pic.twitter.com/4QYV4gKqhi

For example, it was eye-opening to discuss the shared challenges of religious extremism and a belligerent Iran, and reassuring to see that this is something we are all willing to take on together. There was delight on the faces of many of hosts when I shared the news that the UK Government had listened to the campaign led by the Board of Deputies and our communal partners and proscribed the terrorist organisation Hamas in its entirety.

But while the shift in paradigm matters politically, the new reality offers huge potential in terms of trade and tourism. The Gulf states are looking to diversify away from their economies’ over-reliance on oil and gas, and this diversification means that there are many opportunities to do business in the region.

These are also fun places to visit. With warm weather all-year round, world-leading hotels, and big attractions like the Burj Khalifa, the Abu Dhabi Louvre, the Sheikh Zayed Grand Mosque, Grand Prix tracks and trails that celebrate Manama’s ancient pearl trade, there is certainly a lot to do.

An enormous thank you to @BahrainEmbUK Ambassador @fawaz_alkhalifa for his outstanding hospitality to me & @efratsopher over the last days as part of our @WorldJewishCong delegation to celebrate the #AbrahamAccords. It was superb getting to know this wonderful country ♥️ ???????? pic.twitter.com/Cg9Du0nVfz

For the Jewish tourist in particular, whether it’s the long-standing synagogue in Manama, the nascent Jewish communities of Dubai – including a new Jewish Community Centre managed by former Board of Deputies staffer Jake Berger – or the massive Abrahamic Family House synagogue-church-mosque complex under construction in Abu Dhabi, there is a lot to get excited about.

We learned from the thoughtful manager of this latter endeavour about his work to build a Mikvah on the Abu Dhabi site. His biggest concern was how to get the natural water to fill the Mikvah in one of the places on Earth with the least rain. In fact, he is currently exploring whether they can fly in blocks of ice!

There are ever more options for the Kosher traveller, with three Kosher restaurants in Dubai; the Ritz Carlton and other hotels in Manama offering Kosher food; as well as a growing number of Kosher catering companies.
On Shabbat, as I listened to the newly-minted Prayer for the Emirati Royal Family in one of the hotel minyanim, I could certainly understand the gratitude they felt for the culture of tolerance and welcome for Jewish people being fostered by our new friends in the Arab world.

I am already in the process of planning new ways that we can grasp the full benefits that the Abraham Accords are providing. If you have ideas, or want to be involved, please be in touch on philip.rosenberg@jdcorps.org.

Phil Rosenberg is the outgoing Director of Public Affairs at the Board of Deputies of British Jews and incoming Associate Director at the PR Office. He is a member of the Jewish Diplomatic Corps of the World Jewish Congress.

About the Author
Philip Rosenberg is Director of Public Affairs at the Board of Deputies of British Jews. Philip is a longstanding activist in interfaith relations, serving as Co Chair of Camden Faith Leaders Forum and formerly as Executive Director of the Faiths Forum for London. He was previously a Labour Party councillor in Camden.
Related Topics
Related Posts
Philip Rosenberg
Comments