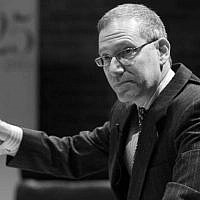 The Blogs
Oren Gross
Apply for a Blog
Please note that the posts on The Blogs are contributed by third parties. The opinions, facts and any media content in them are presented solely by the authors, and neither The Times of Israel nor its partners assume any responsibility for them. Please contact us in case of abuse. In case of abuse,
Report this post.

I was reminded of this expression when I read Sarah Silverman’s Twitter post in which she commented on a picture showing the members of the Squad writing: “Love this group!! You give me hope! Wish there was a progressive jewess in there … someday.”

Sorry to break the news to you, Sarah, but there is no such creature as a “progressive Jewess.”

the only way to be accepted as a card-carrying member in the progressive club makes it impossible, by definition, to find a “progressive Jew.” There’s simply no such creature!

Now, let’s be clear. I have no doubt whatsoever that Sarah Silverman and scores of other Jewish women (and men) are far more progressive than the likes of Rep. Ilhan Omar or Rep. Rashida Tlaib when it comes to most issues on the progressive agenda. I also recognize that Jews have always been at the forefront of progressive movements in the United States and worldwide. None of that matters in the least. The only thing that seems to matter now, the only way to be accepted as a card-carrying member in the progressive club makes it impossible, by definition, to find a “progressive Jew.” There’s simply no such creature!

to be progressive you must accept the idea that Jews, and Jews alone, are not entitled to self-determination as a people.

You see, for a Jew to be deemed “progressive” by such luminaries as the members of the Squad, she must check her identity at the entrance door to the club. In a space governed by identity politics, the Jew must strip of her own identity and, in a real sense, become Jew-less or non-Jew.

Indeed, it is only Jews, among all minority groups, whose entry to the progressive club is somehow challenged and qualified. Women, blacks, LGBTQ+, Asians, you name it, enjoy a practically automatic admission (unless they choose not to join). With Jews? First, prove that you are an anti-Zionist.

Want to be admitted to the progressive club? Delegate to others the power and authority to identify and call out antisemitism. And guess what? Such power will be sparsely, very sparsely if ever, used.

Then comes antisemitism. Indeed I believe that most anti-Zionists are also antisemites and that anti-Zionism is but the all-too-convenient and “respectable” expression of antisemitism, now that the old religious, social, and racial antisemitism are frowned upon (and even those less so now than in the past). But let’s leave this aside for now. The point is that all other minority groups are given priority (and, frequently, exclusivity) in calling out speech, threats, and acts that target them. Blacks call out racial animus, women call out misogyny and sexual harassment, LGBTQ+ call out homophobia and transphobia, etc. But, once again, when it comes to Jews, matters change. Jews are not only not given exclusivity in calling out antisemitism, but often are not given either priority or any voice at all in calling out antisemitism. Forget the fact that antisemitism is the oldest hatred and that Jews have been at its receiving end for millennia so much so that it is now very much part of our collective (and for many also individual DNA). Jews simply cannot call out antisemitism. Want to be admitted to the progressive club? Delegate to others the power and authority to identify and call out antisemitism. And guess what? Such power will be sparsely, very sparsely if ever, used. And even on those rare occasions in which antisemitism may be called out, it may take a back seat and not addressed because other, seemingly more pressing matters demand attention. Thus, for example, a recent complaint against a diversity, equity and inclusion program created at Stanford University alleges, inter alia, that “the DEI committee decided to omit any mention of anti-Semitism so as not to dominate the discussion about anti-Black racism.”

And so we come back to Sarah. Like so many other American Jews she desperately wants to belong to the progressive club. In fact, I have no doubt that she sees herself as a member in good standing in that club. But, Sarah, you really ought to check your membership card and ask yourself: am I progressive? or am I Jewish? That you (or I for that matter) think the two are not mutually exclusive is all good and well but insufficient. Unless you are willing to check the core of your Jewish identity at the door you will remain, at the end of the day, part of the “Benjamins.”

About the Author
Professor Oren Gross is the Irving Younger Professor of Law at the University of Minnesota Law School. He is an internationally recognized expert in the areas of international law and national security law.
Related Topics
Related Posts
Comments
Advertisement