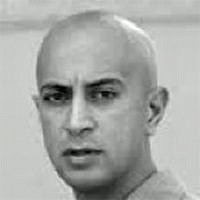 The Blogs
Avi Issacharoff
Apply for a Blog
Please note that the posts on The Blogs are contributed by third parties. The opinions, facts and any media content in them are presented solely by the authors, and neither The Times of Israel nor its partners assume any responsibility for them. Please contact us in case of abuse. In case of abuse,
Report this post. 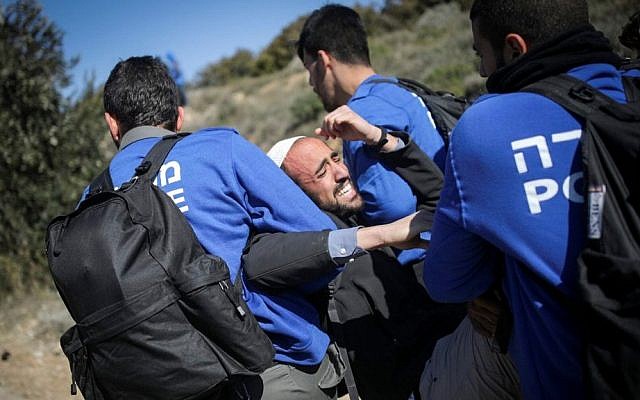 Israeli police forces evacuate people from the synagogue of the illegal outpost of Amona, on the second day into the eviction on February 2, 2017. (Yonatan Sindel/Flash90)

Contemplating the menu options for an Israeli-Palestinian peace deal at his pre-summit press conference with Prime Minister Benjamin Netanyahu, President Donald Trump displayed uncharacteristic flexibility. “I’m looking at two-state and one-state, and I like the one that both parties like,” Trump quipped, as Bibi laughed in the background. In other words, what he was saying was: I’ll have what they’re having.

The new US president, who ran on his skill as a dealmaker, may be surprised to soon learn what many of us already know. The two-state solution is no longer on the menu. It hasn’t been realistic or relevant for quite a while now. That option gave up the ghost somewhere over the past few years, evaporating into the air of the settlements, and lost amidst the split between Gaza and the West Bank. The many hopeful statements being tossed around in Washington, Jerusalem or Tel Aviv sound disconnected from reality considering the facts and figures: According to the settlers’ Yesha Council, 421,000 Jews live in the West Bank (Judea and Samaria), not including East Jerusalem. Assuming that between two-thirds and 70 percent of them live in settlement blocs that would come under Israeli rule, this leaves approximately 140,000 Israeli Jews who live in settlements that Israel would have to remove in the event of a peace agreement.

Does anybody really believe such a scenario is possible in Israel in 2017? And what about the Palestinian side? Does anybody really think Hamas will beat its swords into plowshares in Gaza the day after a peace agreement is signed, announce that it is giving up control in Gaza, and surrender it to the Palestinian Authority? The truth is that the settlement enterprise won long ago. It has already reached the point of no return.

The recent evacuation of Amona, a single outpost with 40 families that the courts ruled was illegally sitting on Palestinian land, required massive police and security who faced violent resistance in the course of just 24 hours. So who thinks it’s possible any longer to imagine removing 140,000 people? Or does someone think, perhaps, that the Palestinians will agree to leave all these settlements within the borders of the Palestinian state?

Education Minister Naftali Bennett, Housing Minister Uri Ariel, and their colleagues from the Jewish Home party can continue celebrating their victory, believing they have wiped the Palestinian flag from the pages of history, but it’s at best a Pyrrhic victory. That flag, along with the whole Palestinian problem, will not go away so fast, and it certainly won’t go out with a whimper. Difficult, bloody times await us because of these “victories” and the view that the land belongs entirely to us. Two and a half million Palestinians in the West Bank are not going to disappear, nor does it seem that anybody on the right intends to grant them Israeli citizenship any time soon. So maybe we should wait a bit before breaking out the champagne to celebrate the defeat of the two-state solution.

These days, Prime Minister Benjamin Netanyahu and others are bringing us news of “the regional solution.” In other words, they reassure us, the Arab countries are going to start helping us find a solution to the Palestinian problem. After all, Egypt can’t stand the Palestinian Authority and its leader. And Saudi Arabia doesn’t really care all that much about the Palestinians at the moment as it focuses on threats from Iran.

Maybe the time has come for Israel’s prime minister, who has been in office for the past eight years, to tell the Israeli public the truth: that we helped to destroy the two-state solution with our own hands and are now heading toward a violent explosion with the Palestinians at best, or one binational state at worst.