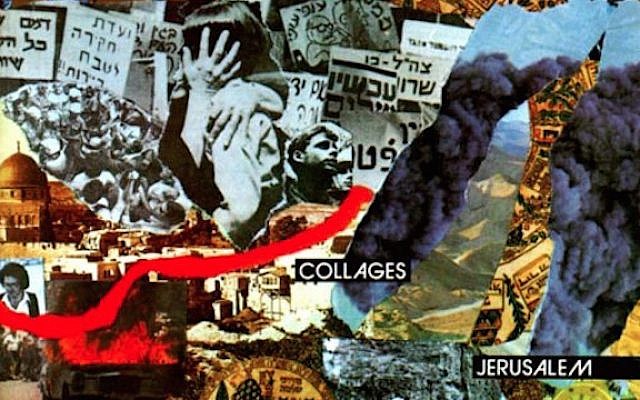 A composer renews his long walks throughout Jerusalem.  An age-old dilemma: to lock into the inner musical imagination, closing off the sounds around — or to immerse the ears, totally, in the rich multi-layered sound-weave of Jerusalem?

A kaleidoscope of sound mirrors the Jerusalem sunset: orange, mauve, gray-green. People’s sounds are merging with car cries. Wooden ouds, fusing with knifing sirens. Uncanny Jerusalem wind: unpredictable multi-directional air shafts and turrets of murmuring layers of collective whisperings. Sirens turn to hiss and scratch, in a modern place-replaced by winged surf of night wind. A new nudge at daybreak, clockwork-orange helicopters interrupt the morning peace, daily surveillance of the inner Jerusalem skies. The omnipresent radio beeps: the hourly news. These Jerusalem clockworks are reminders that we are in a state of near war. Tension never subsides. (But is it the tension that keeps us strangely alive?) 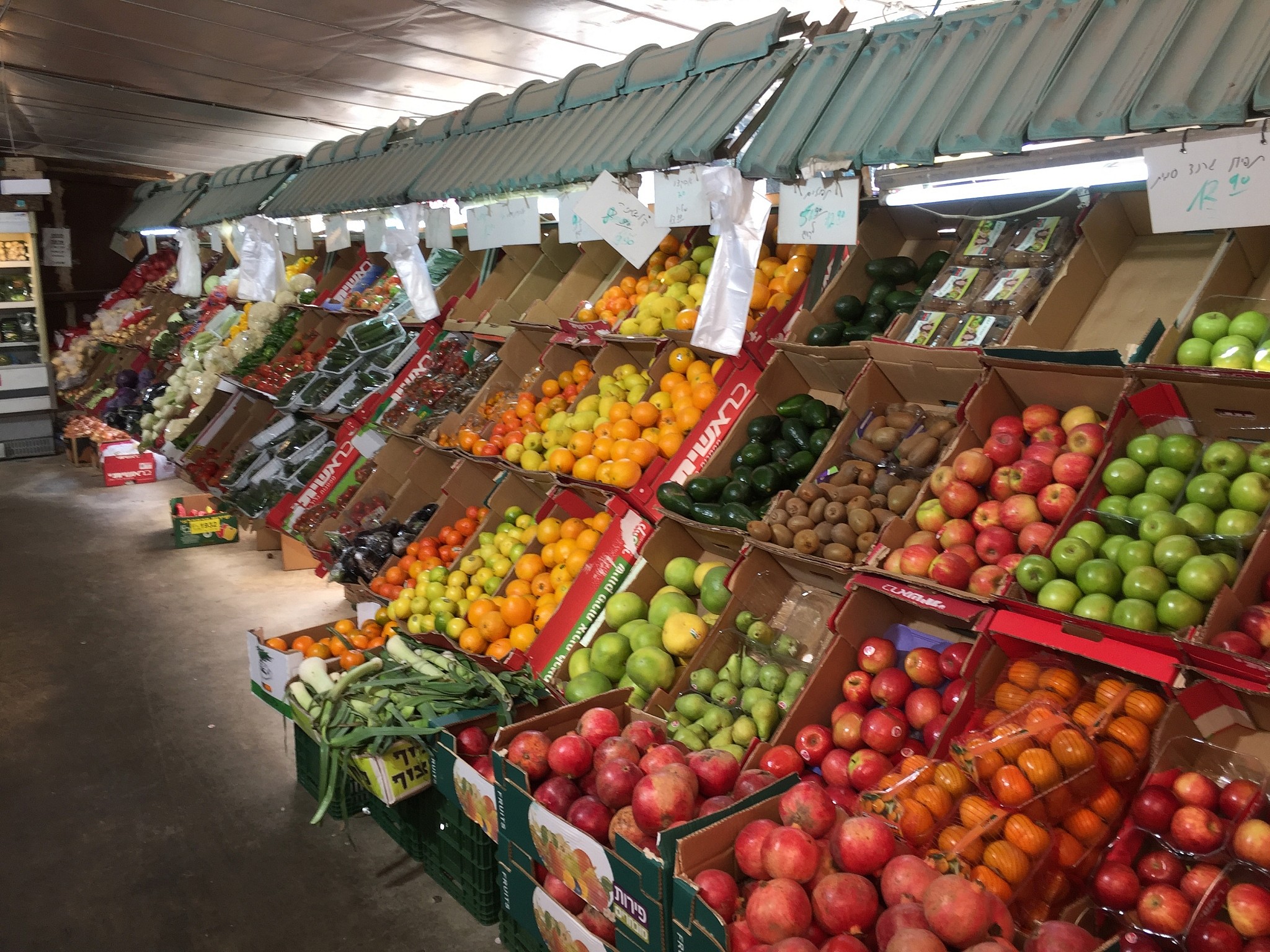 The weave of ancient and modern is unmistakably Jerusalem’s. A counterpoint of ripening voices in the marketplace swells in the dry air. Words sell fruit — fruit is a history of passion, crying out. Further inward to older religious sectors: prayers, rivers of intent, create a haunting sound. Un-clocked and delicate Moroccan movements intermingle with Yemenite song. Undulating Eastern European songs and Polish marches are made sacred. Moving to another locale: imaginary voices ooze from the large expanses of hills surrounding the Old City. Through deep low currents of rolled drums, voices emerge. Are they real or imaginary?

With closed eyes, imagination can be free and roam uncensored. Voices and drum rolls expand to ancient choirs, plucked strings and distant unison trumpets, the sounds of ancient palimpsests. Thin, tart, double-reeded sounds and delicate bells ornament the thick-carpeted sound. Suddenly a wave of lush electronic-like wash, leave a deep pregnant silence, like the strange silence of the muezzin, the Moslem prayer leader.

Awoken to reality, the ear realizes: the muezzin from a distance is singing. Haunting black-holed silences between his chants hang on the moment. These are long, unnatural silences, so powerful, pulling us like magnets to eternity. The song-chant broadcast deep into Jerusalem air is sometimes deeply inspiring, sometimes as deeply disconcerting as the other Jerusalem clock works of helicopters or news broadcasts.

In Jerusalem, sweeps of valleys carry sounds far, a natural baffle. Rock music at Sultan’s Pool flows easily: a reminder of our modernity. Valleys can also carry simultaneous sirens. A reminder of our uneasiness.

A memory: In late summer, birds returned from southern flight. Hundreds, then thousands, collected on trees, adding to the upper overtones of Jerusalem’s sound weave. A river of high-pitched song rose and fell with rushes of Jerusalem wind. Crispness of sound merged with deepened cloud cover in distant near-winter skies.

Now, in winter, Jerusalem is not a city, but a gigantic cave. The populace rarely sets out in winters in this city of deep contemplation and myth making, a city of mystery, whose sounds also reflect the most inner winter thoughts of the multitudes.

I recall one early autumn morning, when muffled gunshots spurted from a neighboring village. Pillowed ears still hear this sound. It takes 10 seconds to realize that it is not the imagination at work, but the machinations of a daily routine. The sounds embed themselves into the foam padding of the pillow.

Back in deep, hot summer, where dogs trailed tongues and plants struggled to survive, the sounds traveled slower through the deep heated current, and slow-speaking merchants replaced the high-pitched fall cacophony of bird chirps and market cries. The logy calm was only refreshed by the cooler night air and the mixed sounds of many musics singing through imaginary air shafts. Creativity is best at night in summer; it streams.

Eyes closed to imagine. Torrential metal gun bursts, finding a slow day of deep wooden pulsing sounds. Jerusalem houses the many paradoxes of a modern city built on ancient soil (and like a diamond, fused from the pressure of centuries). The pressure is history and we, like the insignificant carbon molecule, are (and become) part of the diamond.

Imaginary sounds enhance the expanse of sky — a deep presence over the eastern slopes of Jerusalem. The flow of these sounds create a sense of space and timelessness. The long horns return — as do the hush of cymbal rolls and deep drum rolls. They seem to prevail, no matter which clockworks, which season or which time of day try to intrude.

Am I content to settle into an imaginary landscape, slowly allowing those native Jerusalem sounds to permeate? Or do I make a clear separation of different layers, like the curved multi-colored streaks of ancient bare stoned mountains. I feel my own insignificance. The music is continuously changing, hard to catch, hard to describe. Words only approximate. Orchestras, with gigantic hanging fruit, play in the distance, a glorious music beyond the imaginable, infused by time past, time present. 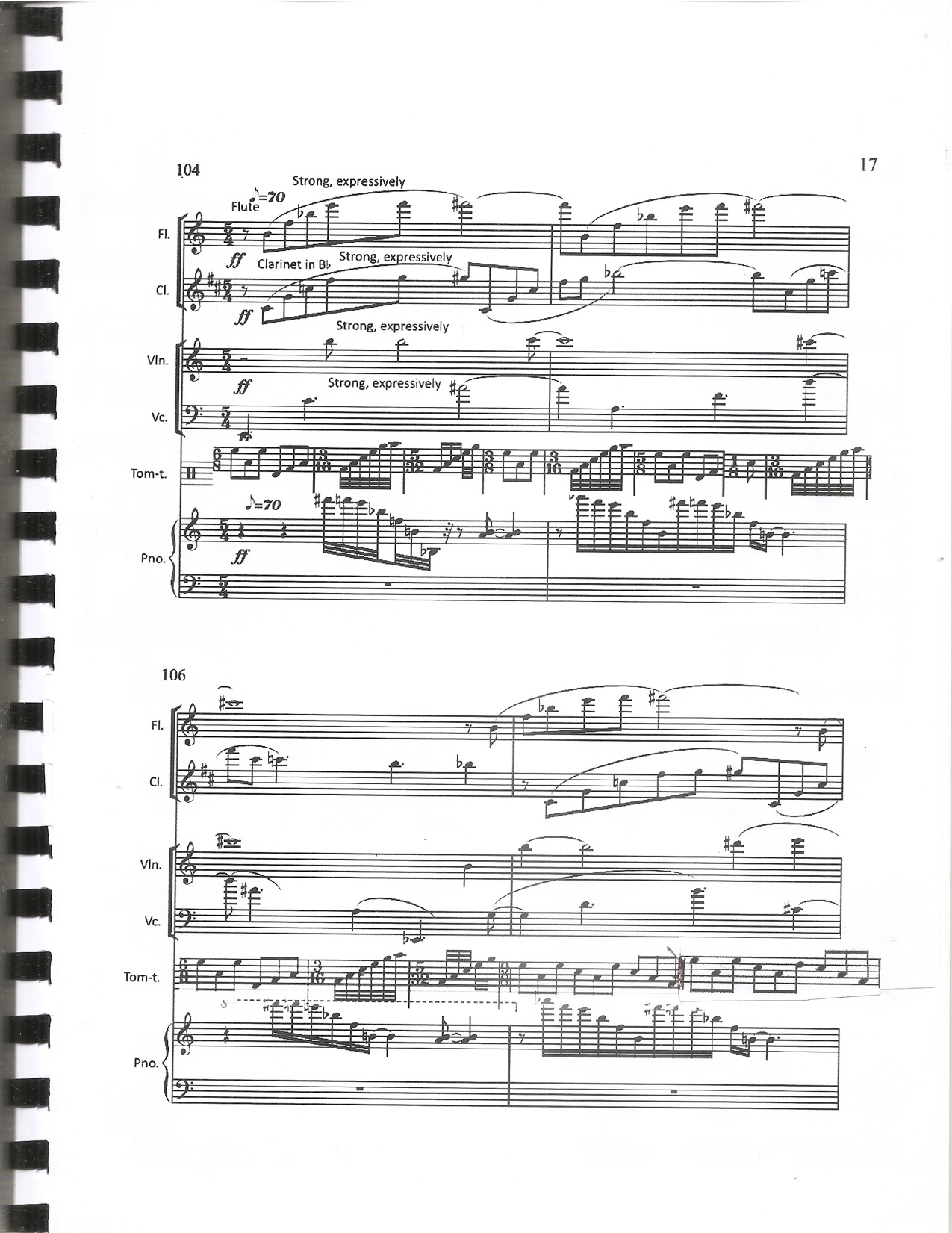 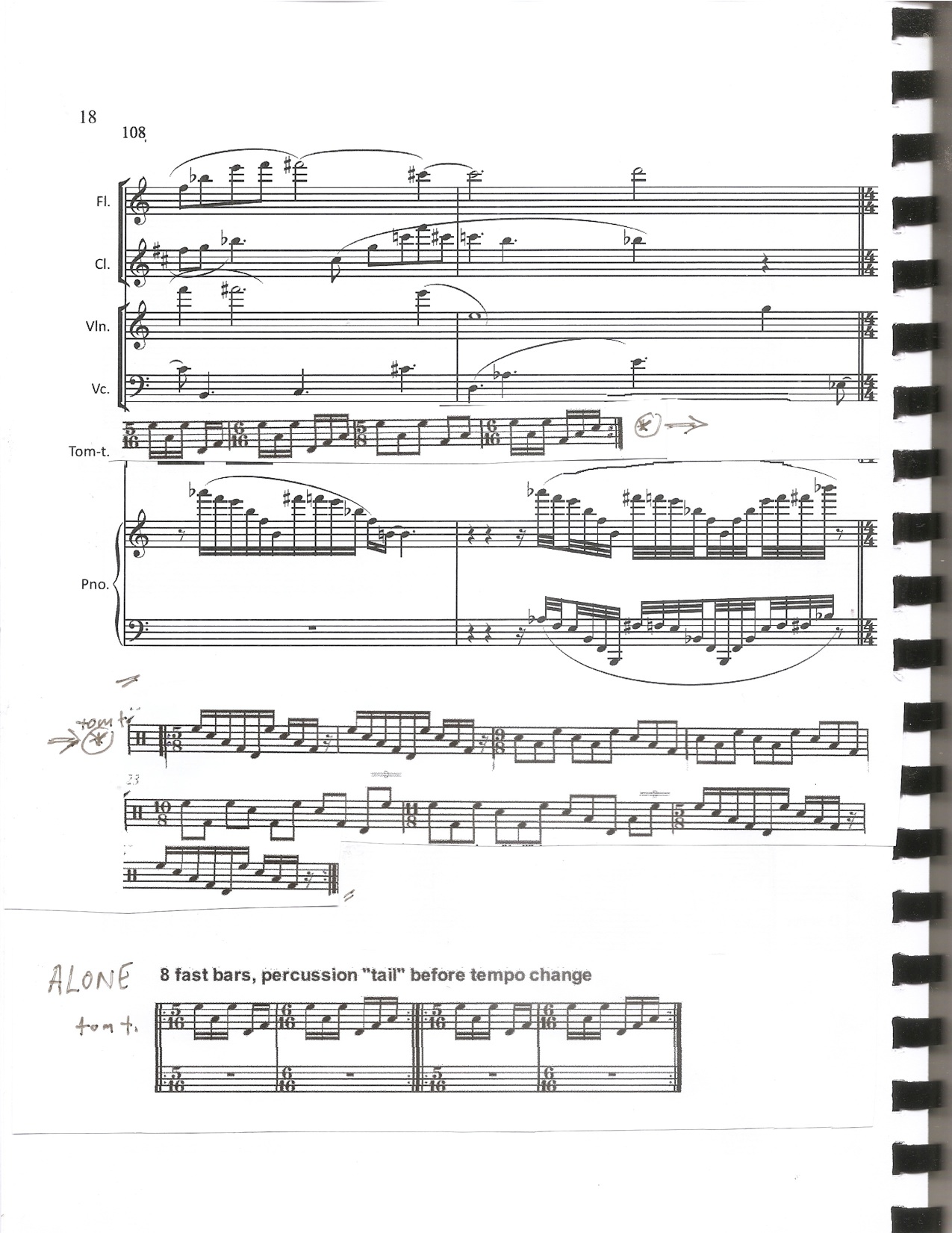 Pages from “Evanescence”, by the author