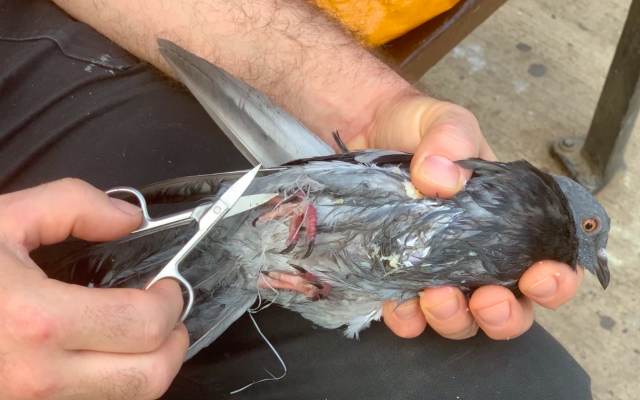 It began with one man who began feeding the pigeons at Gan Meir, a small park named after Tel Aviv’s first mayor, over two years ago. Early every morning he carried a bag of bread to hand out to the birds. 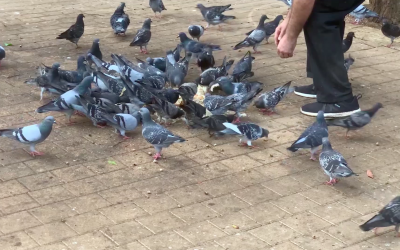 The Pigeon Protector Prepares to Pounce photo by Marc Kornblatt

Even if you don’t like pigeons, read on, because this story has something positive to say about people, Tel Aviv’s municipality, and Israel’s place in the civilized world.

Anyway, back in February, with Covid-19 raging, the man noticed pigeons in Gan Meir hobbling about, entangled by plastic string that erosion had brought to the surface of the park’s one lawn.  The man saw how the synthetic mesh restricted the pigeons’ blood flow and disfigured their feet. 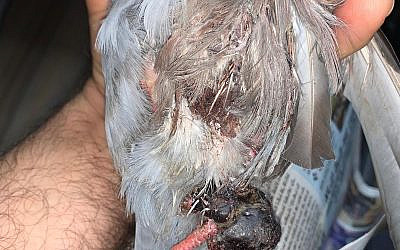 Disfigured Pigeon photo by A. Goodman

He wrote to the city, with 40 signatories, asking that the lawn be removed and grass be planted without synthetic mesh embedded in it.  He wrote perhaps a half dozen times, received friendly letters, but saw no action.

The man took it upon himself to cut away the pigeons’ plastic shackles. It was not pretty work.  And, again, even if you don’t like pigeons, I hope you agree that it was important work, a civilized act of compassion.  Necessary work, because Tel Aviv is a thriving metropolis, a center of commerce, culture, and high tech. A leader of the Middle East, if not the world. And what was happening to the pigeons was barbaric. 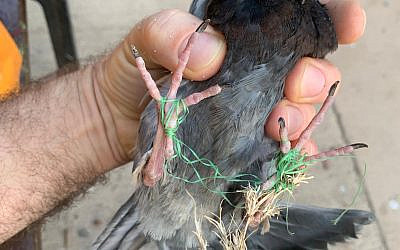 Ensnared Pigeon photo by A. Goodman

The man railed against the municipal government, despairing that anything would change.  After eight months of freeing as many as 140 shackled pigeons, the man appealed to a friend in the park to make a video about the pigeons’ plight. They uploaded the video to YouTube and shared it with like-minded people, encouraging them to respond under it and send the video’s link to the city.  A blog on this website soon followed.

Within days the city acted. 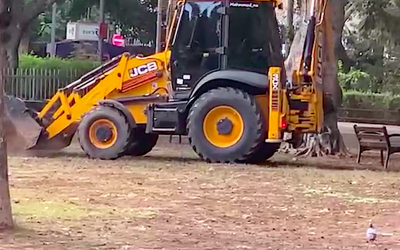 The City Responds photo by A. Goodman

It’s not a big story. Climate change still threatens the health of our planet. Palestinians and Israelis are still at loggerheads. The homeless still wander Tel Aviv’s streets.

But the municipality has ripped out Gan Meir’s lawn, with promises to plant grass without plastic mesh.

So, three cheers for the pigeon protector and the people who supported his efforts, and two cheers for Tel Aviv’s government.  Two cheers, because the municipality took so long to respond and our champion is not convinced that the synthetic netting is gone for good. The city, you see, replaced the lawn once before, with plastic string.

For now, this small victory says something beautiful about one man’s solitary acts of kindness toward a creature typically reviled as a pest. It also shows that Tel Aviv’s local government can listen and respond in a dignified manner.

As Dostoevsky wrote, “The degree of civilization in a society can be judged by entering its prisons.”  To which I might add, “…and by how it handles its pests.”