After the Spanish Inquisition and the 1492 expulsion, Jewish life in Spain vanished. But slowly, over the past 150 years, Judaism has returned, especially in Barcelona. An estimated 7,000 to 10,000 Jews support six synagogues in the city, three of which are non-Orthodox, and one of which is a member of my organization, the European Union for Progressive Judaism (EUPJ). 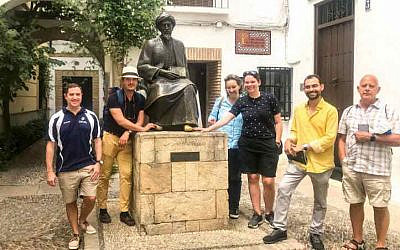 During an international Shabbaton, Rabbi Haim Casas took delegates on a walking tour of the Jewish quarters of Cordoba and Seville.

My personal discovery of Spain’s Jewish renaissance dates back to 2011. I worked for Google and spoke at a literary festival in Segovia, a charming, historic city located north of Madrid. It surprised me to see many road panels pointing to a “Jewish neighborhood,” complete with a cemetery, former shops and a restored synagogue-turned-museum. Who had installed the signs? I investigated and discovered Red de Juderías de España, the Network of Jewish Neighborhoods, a non-profit association dedicated to bringing online the Jewish heritage of 24 Spanish cities, from Avila to Tudela. 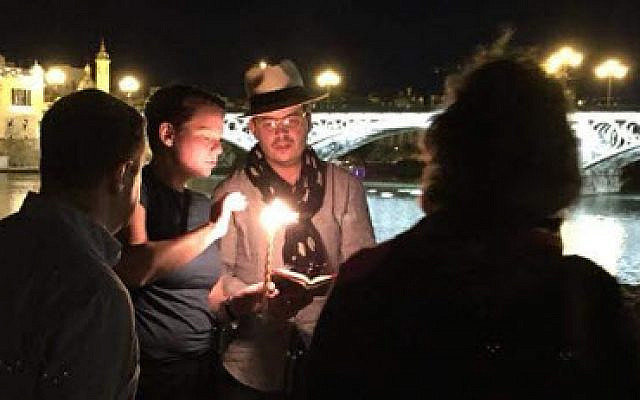 Together, we created a Caminos de Sefarad – Spain’s Jewish Streets, powered by Google Maps.   By clicking to the group’s website, users from all over the world may visit and tour the cities to discover Spain’s Jewish past.  The Google Maps project allows you to explore the main landmarks online. Click on a landmark and historical information about each site appears.  An intuitive search panel presents Jewish heritage sites by category, type, geographic zone, and date. In total, 523 sites, 910 dates, and 1,667 pictures are displayed.

Earlier this year, I was pleased to rediscover my partners in this exciting Google Map project. We joined together in the EU-sponsored Networks Overcoming Antisemitism (NOA). And I was delighted to see how their activities in the Barcelona-based European Association for the Preservation and Promotion of Jewish Culture and Heritage (AEPJ) have grown far beyond maps and far beyond Spain. The AEPJ  sponsors cultural initiatives and educational programs around Jewish sites throughout Europe.

Jews began returning to Barcelona and the rest of Spain in the mid-19th century. Initially, they came from Morocco, followed closely by Eastern European Jews who were fleeing the Russian pogroms. At the beginning of the 20th century, Turkish Jews and other Sephardim also settled in Barcelona. In 1918, these immigrants founded Comunidad Israelita de Barcelona (CIB), the first Orthodox synagogue in Barcelona.

The Jewish Renaissance in Spain accelerated after the end of the Franco dictatorship and the restoration of democracy. Jews from all over the world, and in particular, Latin America, arrived.

In 2014, the Spanish government offered citizenship to descendants of Jews expelled in 1492 – and about 130,000 applied. Recent arrivals include American, French and Israeli Jews, attracted by Barcelona’s climate and culture.  Many descendants of Conversos (Jews who were forced to convert to Catholicism during the 14th and 15th centuries) are rediscovering their Jewish roots. Some are converting back to Judaism.

Although Barcelona’s Jewish community, like the broader Catalan community, is divided on the issue of Catalonian independence, a consensus exists on the need to revive and celebrate the region’s long-lost Jewish heritage. For the past two decades, the city of Barcelona has organized an annual Jewish film festival. The city’s historical museum, Museum of the History of Barcelona (MUHBA), added an entire annex dedicated to the city’s Jewish history. And, in an act of reconciliation, the local government even renamed the Jewish quarter’s main street after Salomó ben Adret, an important Medieval Jewish community leader.

Outside of Catalonia, a significant Jewish revival is also visible. Rabbi Haim Casas, a Liberal Rabbinic graduate of Leo Baeck College in London, lives in Cordoba. In addition to traditional synagogue work, Rabbi Casas gives tours to Jewish and non-Jewish visitors throughout Andalusia.

“My main task as a rabbi in Spain is to help Spanish people rediscover and reconnect with their own Jewish legacy,” he says.  Like Barcelona’s Mozaika, Rabbi Casas promotes Jewish culture through “events, meals, and activities”, welcoming anybody who is interested. “I’m a tour guide, activist and rabbi,” he says.

It may have taken more than five centuries, and it may take new, innovative, and untraditional forms, but Judaism and Jewish life are finally back and thriving in Spain.