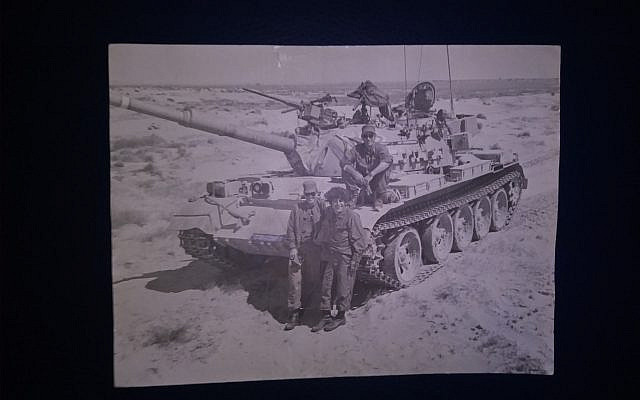 I’m not unfamiliar with Russian aggression. Prior to October 1973, on a daily basis, I sent back reports while serving in the IDF on the Syrian border. The intelligence officer whose safety was my charge pointed out continuous increases in Soviet (now Russian) weapons amassing on the border with Israel.

My friends and I faced Soviet weapons in the hands of Egyptian and Syrian troops on and after October 6th, 1973, the Yom Kippur War, if you remember. I carried a Soviet made RPG that a Syrian troop “voluntarily” donated to me.

I became a tank commander on a Soviet T-55.

This begs the question “Why?” Why would the Soviet Union support the UN resolution partitioning Palestine, thus creating the new nation of Israel, but seek to destroy it by supplying deadly weapons to Israel’s enemies?

Today, Syria is the beneficiary of even more deadly weapons from Russia. Indeed, I can argue that the Assad regime exists today ONLY because of Russia’s presence there. A deadly presence. A destructive presence. Millions displaced, tens of thousands dead.

Israel treads carefully in Syria, disrupting supply lines sent to Iran’s proxy, Hezbollah. There are certain “understandings” with Russia. The Assad regime is not the target. Russia will not deploy against IDF incursions into Syria, incursions whose objective is to destroy deadly Iranian weapons before they reach Hezbollah. We understand all that. We too can “read between the lines,” it doesn’t really take much imagination to do that, and to understand that.

However, there comes a time when too much is truly TOO MUCH! Every day I see more and more devastation, carnage, murder and chaos. The perpetrators: Russia, its leader Putin, his immediate supporters and many of the severely brainwashed people of Russia. By shutting down all access to outside sources of news, Russia’s leader has complete control over what the citizens of Russia hear, see and read. Sounds like Gauleiter Joseph Goebbels reincarnated.

By throwing the lie that Ukraine is a Nazi nation, its citizens Nazis and its leaders Nazis, Putin uses classic disinformation tactics and propaganda pioneered by… guess who? Hitler himself.

Every day, whenever I tune in to any of the many available news sources, I cannot escape the terrible similarities I see between Putin and Hitler. Putin’s bombardments of civilian homes, apartment blocks, hospitals, infrastructure, Holocaust Memorials, Putin’s military reckless disregard for HUMAN life, the murder of innocent civilians, the more than ten million Ukrainians forced to leave their LIVES behind and face truly uncertain futures as refugees, all to what end? So that Putin can crown himself emperor of an empire lost? So that he can reclaim a former “glory” of a Soviet-era nation that subdued countless “satellite” nations?

And, so I ask, when we (collectively, as Jews, as Israelis, as fellow human beings) say NEVER AGAIN, what exactly do we mean? Does the government of Israel still need to “tip-toe” around Russia, because it allows mostly unhindered incursions into Syria? Is this really worth it, when the final accounting will come, and the question will be asked, WHERE WERE YOU when Russia destroyed so much of Ukraine? Did you speak out? Did you take a stand? Did you send more than a field hospital (with all due respect to those brave women and men who help heal the wounded there)?

How many more atrocities can I, as a son of Jews who fled Germany and Austria to come to Palestine, as an Israeli who served on the front lines as a combat warrior in the IDF, as a fellow human being, see and remain silent? I urge my friends and my fellow Israelis: let us not walk that fine line, rather, let us take a bold and decisive stand to CONDEMN in the strongest terms Russia and its intentional destruction of Ukraine and its intentional murder of its citizens.