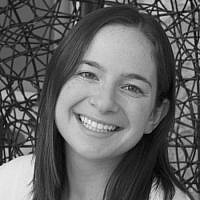 The Blogs
Rena Levin
Apply for a Blog
Please note that the posts on The Blogs are contributed by third parties. The opinions, facts and any media content in them are presented solely by the authors, and neither The Times of Israel nor its partners assume any responsibility for them. Please contact us in case of abuse. In case of abuse,
Report this post.

You know the ones I’m talking about – those tan/beige/brown dots on an otherwise would-be white floor, the ones that make you think this Israeli apartment hasn’t been renovated since the early ‘60s, the ones that – if you’re anything like me – make you want to rip them up and replace them with perfect, gleaming square white tiles.

My therapist has described me as having an OCD-like personality. If you have met me even a handful of times, and especially if you’ve known me for a long time, you understand why I find those speckled floors in my bedroom so irritating. It’s not just that the rest of the apartment flooring is plain ivory – no patterns reminiscent of the Old Yishuv – but it’s also the fact that I can’t see every speck of dirt on my bedroom floor, every stray strand that sheds when I brush my hair, every fuzzball that falls off the bookshelf.

In my previous apartments (there were two others over the past five years), my bedroom floors – and the rest of the apartment – had those perfect, gleaming square white tiles. Or at least they would be once I swept and mopped them. Now, I have to live with the fact that no matter how often and how intensely I sweep and mop my bedroom floors (and believe me, I sweep and mop often and intensely), I will never be able to see any remaining dirt because it’ll be hidden by those speckles. 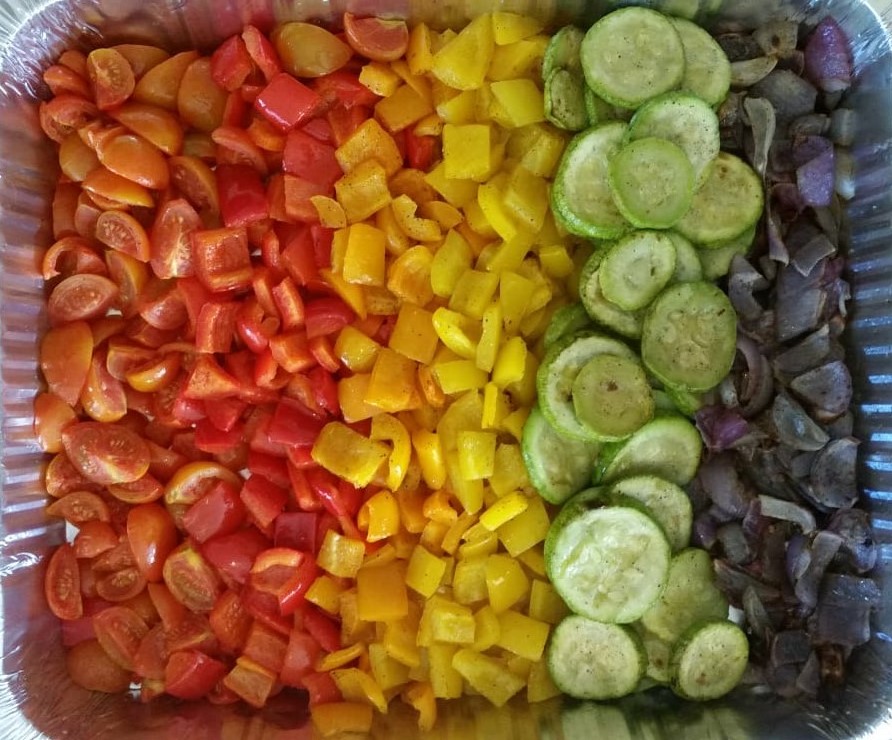 For the first four months that I lived in this current apartment, I would complain about those floors pretty consistently. I would get on my hands and knees and inspect each individual square to see if I missed a runaway piece of earth brought in from a shoe that had been outdoors. I would be doing (or attempting) a push-up on a yoga mat and stop mid-push to throw away a hair that I proudly found, despite its best effort to hide from me. If I sound like a crazy person, you’re not the first person to think so (although my therapist would never actually say those words to my face). I just want everything to be perfect and clean and never get dirty but even if it does get dirty, for me to be able to clean it and make it perfect again. Is that asking so much?!

Well, since March 2020, yes, it is. I’ve had to tell myself over and over again that I can’t control everything. And since you already know so much about me, it probably won’t come as a shock that I’m a planner – both for short-term stuff, like an upcoming Shabbat meal, and the long-term, like my next three-week trip to the States to visit my parents, siblings, and niblings (nieces and nephews – okay, now you really know a lot about me). So when Corona hit, and all our lives became unpredictable in ways we never thought possible, I had to do some adjusting and practice flexibility. I’ll be honest, I was not as successful as I would have liked… but I did try. One of the things my therapist asked me was, “Rena, if I dropped a piece of hair on the floor right now – what would you do?” Without missing a beat, I said, “I would pick it up and throw it away.”

Months later, I’ve slowly come to the realization – that many of you have probably already come to on your own, probably a while ago – that if the hair stays on the floor, life will continue to be imperfect. The world will continue to be as unpredictable as it has been up until now. I can pick up that piece of hair – but people will still get sick, and tragically, people will still die from this virus. I can pick up a piece of dirt – but Israel will remain under lockdown until further notice. I can sweep and mop until I’ve run out of floor cleaner – but I can’t change the fact that my floors will never be un-speckled, nor can I change the fact that until everyone gets vaccinated, our lives will probably continue the way they are now. 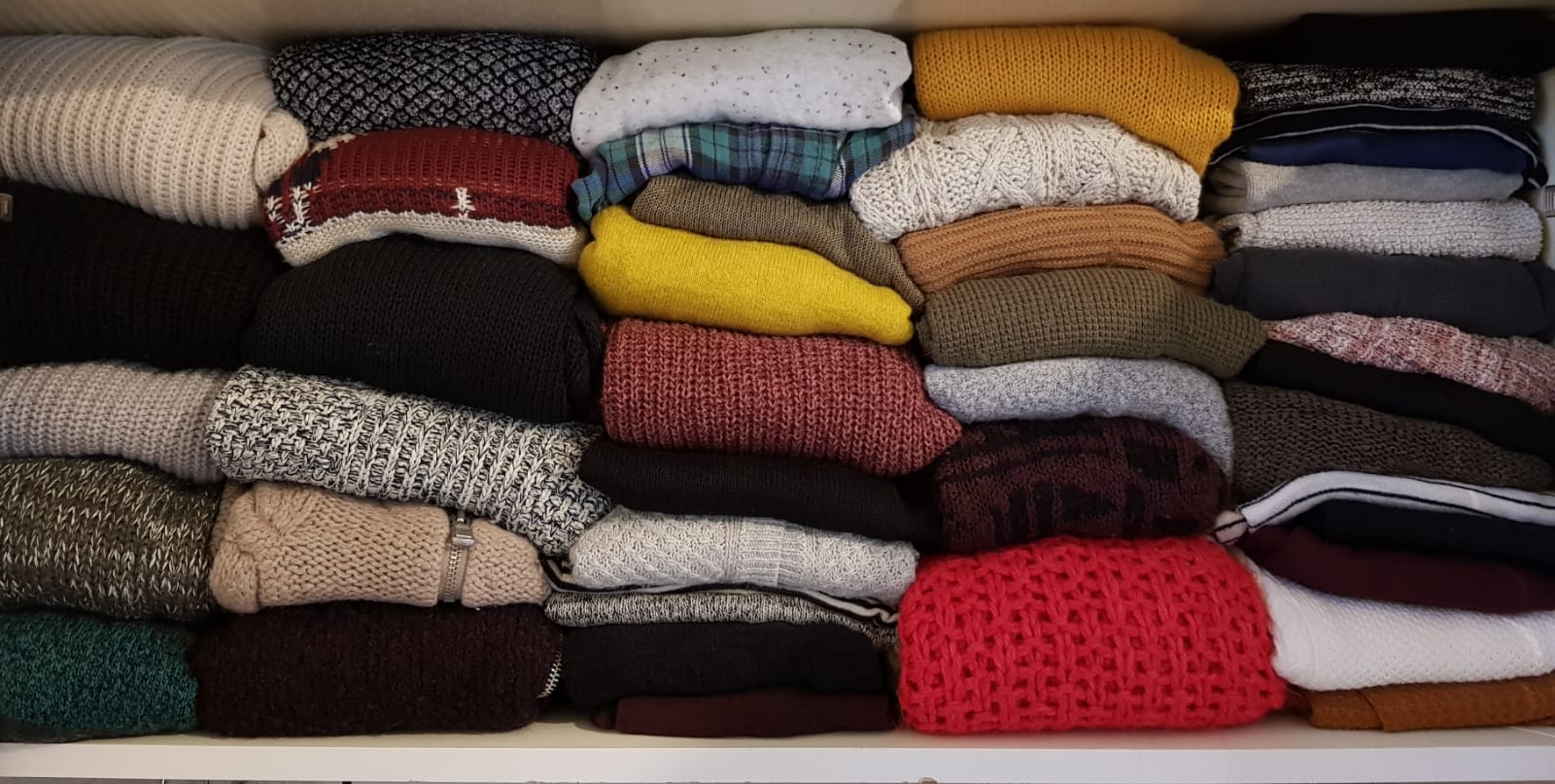 They’re not color coordinated because they’re organized in a different order, for good reason

I’m not one of those people who says things like “What you can change is your attitude!” And if I ever do say something like that, then we know one of the side effects of the vaccine. But I can say for myself that just saying it out loud, realizing it, acknowledging it, processing it and trying to move forward with it, has been a big help. Since the vaccine arrived in Israel, I’ve definitely become more optimistic – I’m not saying I actively changed my attitude… just that my attitude somehow, passively, got changed for the more positive. Even though I don’t fall under the categories of 65+-year-olds or medical personnel, I am encouraged that one day in the very near future I will get my first dose of the vaccine. Even though the country is on lockdown until the end of January, I am optimistic that one day in the somewhat near future stores will be able to open up again and restore their businesses. Even though the number of sick people remains high, I am hopeful that one day in the distant future, I will be able to fly to America and hug and kiss and reunite with my family there.

Until then, I’m going to pretend like that stray hair doesn’t bother me, and go clean the kitchen instead. Just kidding.

About the Author
Rena Levin is a Project Manager at The Times of Israel. She moved to Israel in 2015 and has worked in the fields of informal Jewish education and non-profit media since making aliyah.
Related Topics
Related Posts
Comments