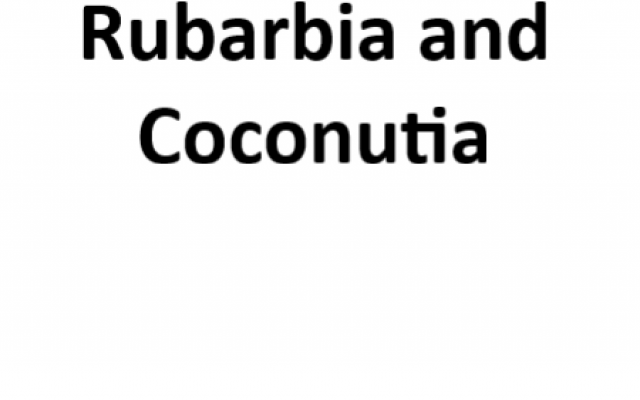 The two peoples living together in one country did not get along. The Rhubarbians hated the Coconutians. They had different religions, different customs; wore different clothes. They were two different peoples; something had to be done. A solution was found, the country was split into two, new, countries, Rhubarbia and Coconutia. There was a forced exchange of populations. Rhubarbians were thrown out, sometimes violently, from Coconutia, and Coconutia totally cleared of Rhubarbians.

Even this solution was not without problems. Rubarbia and Coconutia fought several wars over small, disputed border areas. But, by and large, the split was successful although an atmosphere of hostility and suspicion remains to this day.

Readers with long memories may remember these dramatic events that occurred back in 1947 and realise that, in reality, Rhubarbia and Coconutia are India and Pakistan. The breakup of the Indian subcontinent, after many years under British rule, the Raj as it was known, gives us a way forward for the several countries with disparate populations suffering similar problems. Let us take a look.

The Disunited State of America (DSA) is a good example. The population is just about evenly split between the Democrats and the Republicans (even stranger names than Rhubarbians and Coconutians) and both hate the other like poison.
Hillary Clinton, a former first lady with a long record of service as a New York Senator and Secretary of State, lost to Donald J. Trump. Trump, not exactly a nobody but without any political experience, ran an unconventional and very divisive campaign. At the end of the day, Clinton won the popular vote with 65,853,516 votes to Trump’s 62,984,825 but due to America’s incomprehensible system involving the Electoral College, lost the election.

This was the fifth time a US presidential candidate won the popular vote but lost the election. Such a situation cannot be allowed to continue; it is time to divide the country into two – Democratia and Republica. The current US has a good road system, it should be easy to move the two populations to their new homes.

The Disunited Kingdom (DK), a strange name for a country run by a queen, urgently needs to be split between supporters of the Conservative and Labour parties. These two opposing parties cannot agree on anything and are keeping the DK from realising its true potential. As with the US, the results of the last election are incomprehensible to us normal folk. The Conservative Party won 44% of the votes but got 56% of the seats. Labour, with 32% of the votes got only 31% of the seats. But, however you do the arithmetic, for everyone to be happy the country must be divided. Most of Labour’s supporters live in the North whereas Conservatives tend to congregate in the South, so a line can be drawn across the middle of the DK. The transport system is fairly efficient; barring rail strikes, it should not take too long to get everyone where they belong. Conservatives in Borisonia and Labourites in Corbynonia.

I could go on. France most certainly needs to be split up but the French are in an even bigger mess than the US or UK, so I will finish with a reminder of simpler times ……..
That every boy and every gal
That’s born into the world alive
Is either a little Liberal
Or else a little Conservative!
(Iolanthe – Gilbert and Sullivan)