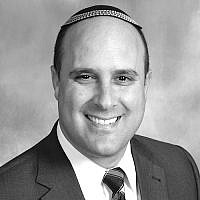 The Blogs
Adam J. Raskin
Apply for a Blog
Please note that the posts on The Blogs are contributed by third parties. The opinions, facts and any media content in them are presented solely by the authors, and neither The Times of Israel nor its partners assume any responsibility for them. Please contact us in case of abuse. In case of abuse,
Report this post. 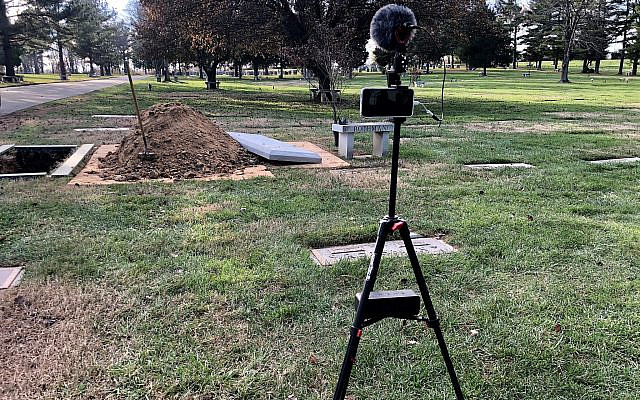 The grave was open when I arrived, and the casket had already been lowered into the earth.  A chilly wind whipped through the cemetery causing the driver of the hearse to take refuge in the warmth of the coach.  The only other person at the graveside was a funeral home employee whose position didn’t exist until recently.  While COVID-19 is typically associated with the constriction of the job market, the funeral industry has added the position of audiovisual technician to its retinue of directors and attendants.  This particular tech has appeared at most funerals I have officiated lately, with his tripod, iPhone attachment, and high quality microphone-complete with furry windscreen muff-in tow.  For the past several months it has become routine for many people to “attend” funerals on Zoom, along with a limited number of people at the graveside.  But this funeral was unlike any I have conducted since the outbreak of the pandemic.  Other than my cameraman (and the driver who sat in the cabin with the heat running), I was the only other person at the graveside.

In the case of indigent burials or funerals for those who have no living relatives or friends, I always make sure that a minyan is present to bury the dead.   But this particular funeral was neither for a destitute Jew nor for a person without family.  The deceased had a living spouse, adult children, and many grandchildren.  He left behind many friends, colleagues, and fellow congregants who knew and respected him.  However, several family members had recently tested positive for COVID-19, which was the cause of death as well.  The cemetery instructed all family members who wished to attend to remain in their cars for the entire funeral, out of concern for the safety of their personnel as well as for me.  The family decided to Zoom-in from their homes instead.  Everyone else who might have been there did so as well. 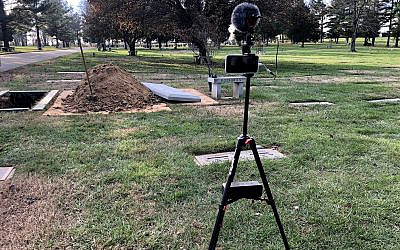 Once my cameraman initiated the meeting, he stood at a distance as I removed my mask and conducted the funeral…alone.

I immediately felt a tremendous weight of responsibility, and the profound obligation of k’vod ha’meit, honoring the dead—especially given the circumstances of this funeral.  While looking into the camera, I eulogized the deceased with the same heartfelt devotion I would had the cemetery been crowded rather than desolate.  When I finished my remarks, other family members offered moving eulogies from their living rooms that could be heard and even seen on the Zoom platform.  Then it came time for the k’vurah, the actual burial.  With each thud of earth I placed on his grave, I thought of the deceased’s grieving spouse and surviving sibling, his children, and grandchildren…I knew that I was their hands, their arms, their legs as I shoveled heaps of soil into the open grave on their behalf.  The casket was traditional: all wood, and adorned on top with a Star of David.  But I noticed that it wasn’t an unfinished pine box, the most basic kosher option…this particular aron was varnished and constructed of a finer quality of wood. The lid was curved rather than flat.  I took note of these extra touches. I chanted the Memorial Prayer with zeal as the brisk wind blew dry leaves in circles around my legs.  The Hebrew word for funeral is l’vaya, which literally means “to accompany,” or “to escort.” In the absence of pallbearers and processions, mourners and their comforters, I was gripped by the realization that accompanying this man to his final place of rest was one of the holiest deeds I have ever performed for another Jew.

In the altered reality of these past several months, I have officiated at downsized weddings moved from hotels to backyards, and b’nai mitzvah in nearly empty sanctuaries.  I have recited blessings at brises and named babies, all via Zoom.  I have taught virtual classes, convened religious services and shiva minyanim on screens, and dug deep into wells of creativity to make holidays and other sacred occasions meaningful for people connecting remotely.  But the quiet sanctity of accompanying this holy Jew to his grave, and personally attending to his proper Jewish burial is something that, long after this pandemic is over, I will surely not forget.

About the Author
Rabbi Adam Raskin is spiritual leader of Congregation Har Shalom in Potomac, MD. He earned his BA in Jewish Studies at The Ohio State University, and received the prestigious Wexner Graduate Fellowship for his studies at the Jewish Theological Seminary in New York and Jerusalem. Some of his greatest loves include teaching and inculcating Jewish joy in children’s lives, teaching and relating Judaism’s deep wisdom in classes and on the bimah, and participating in people’s most sacred life experiences. He possesses truly boundless love for the Jewish people.
Related Topics
Related Posts
Comments