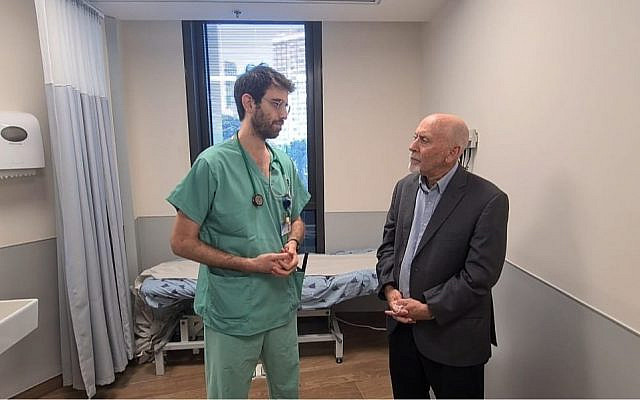 For much of the past year, my mother battled cancer, spending many long months in Hadassah hospital. The care that she received was extraordinary: extremely professional, compassionate, and assiduous. Mercifully, she beat the odds and is still very much with us — as rigorous, lucid, and opinionated as ever. Although vaunted head and neck surgeons oversaw the surgeries, it was the young and consistently talented residents who did the heavy lifting over her long journey to health. They were unfailingly talented, devoted… and exhausted.

To become a fully-licensed physician in Israel requires a 4-to-7 year ordeal, which invariably involves hundreds of white nights, when young doctors are “on call” for 26 hours non-stop.  They have had enough and are about to strike. I support their demands.

Recently, I completed a comprehensive academic article for the Israel Journal of Sociology about the impact of crowding on Israel’s medical system. An entire chapter was dedicated to the shortage of physicians and the burden that it places on Israeli medical residents. Dozens of responses to a questionnaire that I sent out via medical residents’ sundry WhatsApp groups confirmed what anyone who visits a hospital at 3 a.m. can see for themselves: after 20 hours without sleep, even the most robust and energetic physician cannot provide the quality of care that we — or they — expect.  It is simply impossible to have the patience, concentration, and good judgement that a doctor can provide after a normal eight-hour night of sleep.

Every single doctor spoke about fatigue causing them to make medical mistakes, exhibit irascible bedside manners and navigate a personal life that is coming apart at the seams.  Even though Israel faces an acute shortage of doctors, it turns out that some 20 percent of medical school graduates have started to drop out of the system after seven years of training, choosing not to pursue a specialization. Who can blame them? Life in hi-tech pays much better – and is much more pleasant.

In theory, doctors are only supposed to have four or five 26-hour marathons a month. In fact, the doctors reported frequent exigencies leading to eight or nine calls a month. That means that they are left in a permanent cycle of foggy exhaustion.

The system is perpetuated by the Israel Medical Association, the guild of doctors — dominated by men, who offer up sundry rationalizations for the ongoing abuse and exploitation: the system is essential so that the young physicians will have completed enough medical procedures to qualify to be fully-certified physicians; there is ample time to sleep while on shift; reduction in shift length would bring a drop in the residents’ pay, which is already low; and the inevitable condescension: “Well, when I was an resident, call was even longer – and I’m no worse for the wear.”

Of course, the senior doctors have an interest in maintaining the status quo, which continues to place such an unreasonable burden on the younger generation: they did their time. Now it’s their turn to relax a little bit, receive a tolerable salary and maintain a reasonable schedule. The problem is that the same Israel Medical Association which is run by beneficiaries of the present system also claims to represent the young residents. When faced with the glaring “conflict of interests,” their representatives and hospital administrators insist that they know what is best for their underlings.

Slowly but surely, a new generation of residents in Israel rose up to protest the situation. A new union of medical residents — “Mersham” (literally, “prescription”): The Association for Medical Residents in Israel — takes a more militant position. Today, it represents more than a quarter of the young doctors… and it is growing quickly.

As a member of the Knesset Health committee, the outcry of the medical residents eventually made it onto my agenda. Support for Mersham’s demands among the legislators was pretty much unanimous. The young doctors testified and made a very compelling case. I remember one who asked: “How do you expect me to look a patient in the eye at 5 a.m., after not sleeping for 24 hours, and tell them that it’s a good idea to do the surgery now, when they might wait four hours and get the benefit of a fresh doctor?”

Both the minister of health, Nitsan Horowitz and the minister of economics, Orna Barbivai agreed that the present situation was untenable, constituted exploitation, and was in violation of sundry labor laws. The problem was that shortening call by residents would mean paying for more physicians and the Ministry of Finance was loathe to further increase the funding for the health system. Already, the health ministry’s budget head received a multi-billion-shekel boost. If the minister wanted to prioritize conditions of medical residents, that was fine by them. But on his dime.

Facing pressure from the committee that implicitly refused to approve the budget, it was finally decided that a reform would begin where call for residents would gradually be reduced from 26 to 16 consecutive hours. The first phase would begin in April, among residents in peripheral hospitals, like Ziv in Safed or Poriya in Tiberias. All told, only 4% of Israel’s medical residents would benefit. But it was a start.

Only it didn’t happen. The Ministry of Finance was supposed to transfer 30 million shekels, which would supplement 36 million provided by the Health Ministry, to launch the first phase. April came and went, and the money never arrived

Yesterday, Prime Minister Lapid posted on Facebook, expressing solidarity with the residents, and asking them to be patient. Unfortunately, he explained, with the disbanding of the Knesset, Israel’s attorney general preferred to delay the implementation of the agreement until a new government was formed. Lapid promised that the agreement was still valid and that by September 2023, the situation would be remedied.

But of course, this position does not make sense. After intense negotiations, Israel’s teachers are about to sign a new contract during an election period. Why should medical residents be any different, especially when their agreement was made long ago?

The young physicians have had enough excuses. On Thursday, hundreds of them — dedicated, skilled and diligent medical professionals — will tender their resignations. The letters have already been collected. They demand a better a deal… now.

It is unfortunate that our present political culture requires a group of idealistic, young doctors, literally the best and the brightest of our young people, to take such drastic measures to force a modicum of progress. But they are right. They deserve a better deal. We all do.