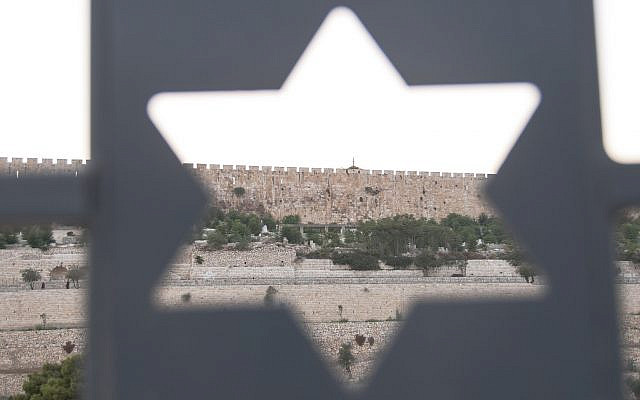 View of Old Jerusalem and the Temple Mount from the Mount of Olives Jewish Cemetery, taken in August 2012. The star of David adorns the fences of the cemetery. (Credit: Yehuda Asulin / Wikimedia Commons)

If we (Arabs and other non-Jews) want the Israel-Arab conflict to end, let’s start by recognizing that Jews are human beings who are equal in dignity and rights with other human beings, and let’s demand that others, including Palestinians, recognize that too. Let’s be honest about the fact that antisemitism is at the root of the conflict, and that it is the main reason why the conflict continues.

I wrote previously that the right of Jews to visit and pray at the Temple Mount is a fundamental right based in freedom of religion, but there is an even simpler aspect to this issue, basic human decency from one human being to another.

Violence is a regular occurrence at the Temple Mount, and the story is the same every time: a few Jews visit the site and, in some cases, pray, causing Palestinians to attack those Jews or to riot, resulting in an Israeli police response. As the Times of Israel puts it, “Jews are generally allowed to visit the Temple Mount during limited hours, but not pray there or perform other acts of worship that can be seen as a provocation to Muslims.” The same article reminds the reader that police protection is needed by Jews visiting the site.

These incidents are not rare occurrences caused by a few extremist Palestinians. They are the norm. And intolerance of Jewish prayer at the Jews’ holiest site, widely referred to as the status quo, is expected not only by Palestinians but also by countries that are at peace and even friends with Israel, including Jordan and Israel’s Western allies.

Why is a quiet prayer by Jews and sometimes even the simple presence of Jews at their holiest site considered “a provocation to Muslims”?

The Arab League says that Jewish prayer on the Temple Mount is “a flagrant affront to Muslim feelings that could trigger wider conflict.” A quiet prayer does not take away any rights from Muslims, including the right to pray, yet we’re told that it could cause another war between Arabs and Israel. Why? There is no rational basis for this. The only possible explanation is that the mere presence of Jews praying is seen as offensive. This is not the reaction that one would expect from people who see Jews as equals or even as human beings. This is the reaction that one would expect from antisemites.

Arab antisemitism did not start with Israel’s victory against a coalition of Arab armies in June 1967 that allowed Israel to control East Jerusalem including the Temple Mount. It did not start with Israel’s independence in 1948. The Arab and Muslim world has a long history of antisemitism which Historian Martin Gilbert documented in his book “In Ishmael’s House: A History of Jews in Muslim Lands”.

But while Israel didn’t cause Arab antisemitism, Arab antisemitism shaped the Arab attitude towards Israel. It contributed to the Arab world’s rejection of the 1947 UN partition plan and other two-state solutions before and after that. It was behind every war and terrorist attack against Israel. Antisemitism has been the key ingredient in Arab actions towards Israel, and as we can see at the Temple Mount, antisemitism still heavily influences Palestinian attitudes not only towards Israel but also towards individual Jews.

From the other side, the Israeli attitude towards Palestinian self-determination has hardened over the years. Israeli settlements in the West Bank have grown significantly and have become an obstacle to peace, but this Israeli attitude didn’t come from nowhere. It came from decades of Arab rejectionism based on antisemitism. It came from Israelis becoming convinced that whatever they did, the hatred and violence would not end so they might as well build homes on their Biblical lands.

The settlements are an obstacle to peace, but not an unsurmountable obstacle because borders can be redrawn, settlers can be moved, and in an ideal world where Arab antisemitism is under control, Jews could even live in a Palestinian state. These changes are difficult but not impossible to implement.

Arab antisemitism, however, is an unsurmountable obstacle because it stands in the way of even the most basic respect for Jews as human beings. It is the reason why Palestinian terrorists see the cold-blooded murder of innocent Israeli civilians, including children, as morally acceptable. It is the reason why Israelis cannot feel safe ending the occupation without any security guaranties in return.

Anti-Israel activists want the world’s attention to be on Israel’s occupation and the settlements, but although Israel deserves some criticism, concentrating on that criticism is a distraction from the root cause of the conflict which is Arab antisemitism. If tomorrow Israel closed all settlements and withdrew all troops from the West Bank, the conflict would not end. It would turn more violent. We know this because that’s what happened when Israel withdrew from Gaza. We also know it because there was no occupation or settlements before 1967 yet there was also no peace and no Palestinian state.

Insisting on the status quo at the Temple Mount is emblematic of the whole conflict. It amounts to appeasing and excusing antisemitism while condemning the victims of antisemitism. A reasonable and moral reaction to Palestinian violence against Jews who visit or pray at the Temple Mount is condemnation of the violence, not condemnation of the victims.

The fact that this needs to be stated shows how much the world is accustomed to appeasing and excusing antisemitic intolerance and even violence, especially when it comes from Arabs.

There is no more excuse for Palestinian violence against Jews who wish to pray at the Temple Mount than there is any excuse for antisemitic violence against Jews elsewhere for any reason. We must stop believing that it is inevitable that Arabs and particularly Palestinians would behave badly, and more importantly, we must stop excusing it. We must expect from Palestinian adults just as much as we can expect from adults elsewhere. If Palestinians cannot show the most basic decency towards a few Jews wishing to pray quietly, how on earth do we expect Israel to trust the Palestinians with a state?

We can and we must expect Palestinian leaders, educators, and parents to teach basic tolerance towards other human beings, EVEN WHEN THEY ARE JEWS. This is where resolution of the conflict starts.