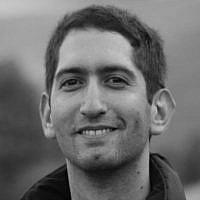 The Blogs
Aaron Krom
Apply for a Blog
Please note that the posts on The Blogs are contributed by third parties. The opinions, facts and any media content in them are presented solely by the authors, and neither The Times of Israel nor its partners assume any responsibility for them. Please contact us in case of abuse. In case of abuse,
Report this post.

I have seen an increasing number of people doubting the reality of this Second Wave and the importance of following the new rules, and I just wanted to share my own experience:

Last night, I came back to do an on-call on the Corona ICU, after a gap since May. It is true that the number of ICU patients has not yet reached the height of what we saw then, but what struck me was how rapidly the numbers are increasing.

At one point, I mentioned to a colleague that I was on-call and he said “What are you worried about? You only have three patients.” It turns out that his info was a couple of days old — we already had double that, and just at the end of my on-call we got another. We are today moving our unit to a bigger area so we can take more patients, but even in the couple of days it’s taken to plan and prepare (the bosses started planning early), we have already maxed out the beds and are moving in the nick of time.

People were saying that somehow this Second Wave is different, and that it has fewer very sick patients. From my limited experience, and from my reading of the MoH graphs, it’s just a matter of delay, and that we are now starting to see the sick patients coming.

A second thing that struck me was that things are a little better than in May, and I do believe that this is thanks to the extra time the public gave us by reducing the curve. The patients are equally sick, but we are a little bit more experienced. Managing ventilated patients on their stomachs, which was so new to us, is now a little easier. We are bringing in treatments such as dexamethasone and remdesivir. Neither of these is a magic bullet, but studies seem to suggest they can help. We are managing fluid balance differently, and I hope better.

People talk about “flattening the curve” as only being important if we get a vaccine or magic cure, or to prevent total meltdown of the health system. But there is also a value in just giving us all a chance to learn how to treat patients better in simpler ways. It also buys time for research around the world to try new ways to treat this disease. I certainly hope and believe that a patient getting diagnosed today will do better than one three months ago, and that is thanks to the time we have been given.

So in summary, I am no economist. I am also in a privileged position that I have work even through the worst lockdowns, and I don’t take that for granted or belittle the difficulties of the vast majority who are suffering far worse. But I do believe that the efforts people make and made in reducing infections can and do help.

About the Author
Aaron Krom is a resident in Anaesthesia and Intensive Care at Hadassah Ein Karem.
Related Topics
Related Posts
Comments