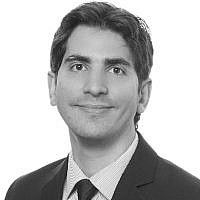 The Blogs
Eran Meron
Apply for a Blog
Advertisement
Please note that the posts on The Blogs are contributed by third parties. The opinions, facts and any media content in them are presented solely by the authors, and neither The Times of Israel nor its partners assume any responsibility for them. Please contact us in case of abuse. In case of abuse,
Report this post.

This is a story about an outcast group who lost their homes, and was forced to hide their religion from their friends and neighbors. Though loyal to the local government in every territory they lived in, they long practiced their religion in secret. This is not the Jewish, but a proud, small minority named the Druze. This group is an example of successful integration in Israel.

The Druze religion was established in Egypt, sharing many common attributes with other religions, such as Monotheism and acceptance of the Ten Commandments. However, with little tolerance to any other religion, Egypt circa 1100 years ago, was neither the ideal time nor a great neighborhood to establish a new religion, much less one that espouses reincarnation.

For a few years this new religion grew. After years of persecution, the Druze closed the doors to new members. Despite closing ranks, the Druze still faced oppression and for the next several hundred years the Druze faced severe persecution, causing them to emigrate from Egypt and ultimately settling in mountainous villages in Lebanon, Syria, and Israel. Sheltered by the terrain, the Druze would fend off attacks from outsiders.

However, the Israeli Druze population still struggles economically. Most Druze communities are in Israel’s peripheral areas, where employment opportunities are limited. Hebrew is a second language for many Druze, and Druze women traditionally stay at home. These factors combine created a vicious cycle in which Druze children are born to poor parents and lacking access to basic infrastructure, do poorly in school.

Fifteen years ago, the average number of students eligible for a diploma was about 50%; for Druze it was closer to 40%. Walking through the hallways of Tel Aviv University or the Technion, your chances of meeting a Druze student were second to none.

By 2014, high school graduation rates in different localities across Israel contain surprising results. Beit Jann, one of the biggest Druze schools, was ranked third! Additionally, the graduation rate among high school students in Beit Jann had reached 100% – making Beit Jann one of the leading schools in Israel, outranking schools in affluent communities and exclusive private schools.

And in this case one swallow does make a summer – not only could the Druze students from Beit Jann surpass average graduation rates, overall Druze high school students outperformed the average of overall percentage of school graduates.

This is a story about a man who was born and raised in a tough neighborhood with few advantages, who nonetheless created one of the few programs in the world to close the achievement gap using the same students and faculty across groups.

Winds of change from afar entered through the narrow aperture in the (metaphoric) wall to Israel’s mainstream, creating a new school of thought in a country insulated from its inception. The social tensions that had accumulated under the surface were erupting, and people from Israel’s demographic and geographic peripheries started speaking out.

Mr. Nisim Cohen was raised in rural areas of Israel. Very few of his neighbors and friends considered higher education as an option, let alone graduate degrees. He decided that he is going to make a difference. To do so, he took the most radical path one could take on in his situation – He went to the Academia.

After dropping out of high school in the eleventh grade, he attended a night school after his military service. Then, he studied sociology and education at the Hebrew University, where he obtained his master degree with honors.

Academia was not welcoming to someone such as Mr. Cohen. He went in search of a solution for disadvantaged students, though the academic establishment at that time stop no longer believed in these kids. Instead, they believed failure was due to variables external to the school; in essence, the kids failed because they were poor. Thus, once Israel was a rich country in a few generations, or at par with developed countries, these problems would resolve themselves.

“As a young student, I went home so furious, asking myself are we really going to wait for generations for these issues to be solved? Are we going to abandon the current generation? I decided that the time to solve this is now.” said Cohen. When he graduated, he had a vision for a change.

He started by tackling math, considered by many the hardest subject to succeed in. “The first stage was to go to math teachers and ask them to create a list of subjects and sub-subjects that a kid needs to master to comply with academic regulations. Needless to say, they warned me that these are not ‘regular kids’ and that teaching them is impossible. Then, I asked them how much time would it take to teach what they see as a ‘normal’ kid that has support at home and is willing to learn. The estimation was about 100 hours”.

“Who said we need to teach math only 2 hours a week? We could teach 5 hours a day and in a month we can gain those hours. So the next step was to take kids who are close to be out of school and to give them a chance. And then show that we can do it at other subjects, such as English. People were pretty excited about the initial improvements we’ve seen, but for me it was only the beginning”.

Cohen implemented his plan gradually during the 1990s. Today, the program is comprised of about 6,000 students from all sectors, in 100 high schools across disadvantaged neighborhoods.

“So we looked for a way to show that we can provide a solution for everyone – students that are most prone to failure, that are part of a sector that historically has less resources, and we found our partner in the form of the Druze community”

But really, this is a story about the kids that no one believed in, who faced lives of crime and poverty. These kids got second and third chances that changed their destiny.

One of every five kids eligible for graduation in the Druze sector in 2014 joined the program. Participants were in the ninth grade with an average grade of F, or an F score in eight subjects on average. These students were the most likely to drop out of the education system. Some students could not read or write.

Tenth grade students are enrolled in the intensive program. There is not much time for a social life as their schedule strongly focuses on their studies. They take part in long study marathons, some of which take place after the official school day ends, and include studying throughout long nights and holidays. “Sometimes we have stayed in school from 8 am to midnight,” says one student.

The program was implemented by schoolteachers that were trained by the Rashi Foundation. These teachers receive continuing support and mentorship by the Foundation. As part of the training, teachers are taught that they must know the students in depth, frequently hold personal conversations with them, and get to know their parents and share the students’ successes with them.

The turnaround in the Druze schools resonates at the sector level, but also leads to a self-confidence boost for these students, and gives a sense of pride and belonging. It equips the students with tools to incorporate them into the workforce, and most importantly, proves it is possible to overcome entrenched economic disparities.

“When I received my high school diploma, my parents saw that my grades are really good and my father cried. He said he felt he was losing me and that I was falling between the cracks. And now he won me back,” said a former student of the plan.

The leap in Druze graduation rates has changed the perception among many decision-makers of disadvantage population. These decision makers for years believed that some high school students simply couldn’t succeed in the state’s high school final exams.

Alongside intensive studies, the program focuses on increasing the students’ motivation and improving their self-image. Cohen calls it “smashing a false consciousness.” A student says “they kept telling us to forget the words I cannot, and replace them with the words I can. When you ace a test the fear of failure begins to disappear. The first time I managed to pass the state high school exam I was shocked – I could not believe that was me. I ran home to my parents. It was an indescribable feeling.”

Though students find themselves in a demanding environment, academic research shows a positive effect on students’ learning, behavior, and sense of belonging, along with improving achievement and reduction in dropout rates. A research study conducted by the Tel Aviv University found that one third of first generation program participants pursued a college degree. A Ben-Gurion University study revealed that, in a control group of high school students with similar academic backgrounds, the graduation rate was zero percent, whereas high school students in the program had a success rate higher than the national average.

It is said that it takes a village to raise a child.

Behind the success of the Druze sector there are 15 high school principals and staff who put forth a unique curriculum that was implemented for the first time eight years ago. The program is supported by the Rashi Foundation (at which Mr. Cohen is a director) and the Israeli government, alongside with philanthropic partners that are sponsoring the program.

“The workload in the program for the student is excessive and in the end the students are the biggest beneficiaries of their hard work. The heaviest burden is imposed on the teachers who are taught not only that every student can succeed but also that every teacher can. All the glory should be given to the program coordinators, teachers and principals, as well as the Ministry of Education. The teachers and principals are the real heroes, and the Ministry of Education should acknowledge them”.

“For years and years we were part of a situation in which there are economic inequalities, as if it was a natural state of things or an ill-fated situation” says Cohen. “The Druze sector has closed the gap, showing that you can be successful with every child from every ethnic group and social background, and with current public school teachers.”

After three years, the shift for the Druze student is clear – high school diploma eligibility was 91.9%, much higher than the national average. Not only that, Druze graduates’ grades are higher than the total population: 78% of those eligible for graduation among the Druze sector met the universities’ minimum required grades, 6% more than other sectors.

At the front desk in Cohen’s office hangs a picture of Martin Luther King, taken during King’s speech at the Lincoln Memorial. “I think it’s a wonderful picture, and it excites me” says Cohen. “I also have it in my study room back home. It symbolizes a dream for a more equal world; it is possible, but it requires hard work. The picture shows that King’s audience is comprised of people of different races. When there is a vision, it moves everyone into action.”

Thanks to Lior Dattel for his prior research, Kathryn Keen and Nadav Elyad for reading early drafts of this post, and Nissim Cohen for sharing his story.