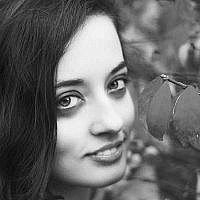 The Blogs
Chloe Pandora
Apply for a Blog
Advertisement
Please note that the posts on The Blogs are contributed by third parties. The opinions, facts and any media content in them are presented solely by the authors, and neither The Times of Israel nor its partners assume any responsibility for them. Please contact us in case of abuse. In case of abuse,
Report this post. 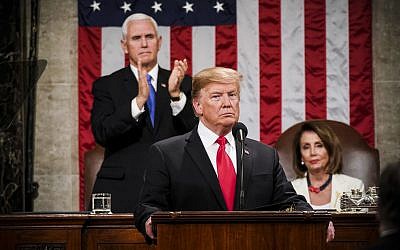 Last night’s State of the Union Address focused on major issues that are happening in the United States at this time. Trump talked about border security, abortion, the Middle East, and party politics. The Republican side of the room had a calm demeanor, while the Democrats looked divided in a sense. The majority of women who were on the left wore white to signify their suffragette stance. Speaker Pelosi did the same while the Democrats pretended to listen to her every beck and call. Overall, everyone was ready for an eventful evening.

Trump’s first portion of the speech was very strong, indicating that the agenda was not for the parties but the American people themselves. A few main points were touched on through this agenda played out by the president.

“To defend American jobs and demand fair trade for American workers; to rebuild and revitalize our Nation’s infrastructure; to reduce the price of healthcare and prescription drugs; to create an immigration system that is safe, lawful, modern and secure; and to pursue a foreign policy that puts America’s interests first.”

Trump reiterated the entirety of his campaign promises and would later discuss these critical points in the address. Some of these commitments have already taken place, but border security is still an issue that needs to be addressed and finalized between both parties of Congress. The president made it known that there is a new opportunity for American politics, only those who grasp it will be victorious.

Before getting into the key issues, Trump pointed out two very critical anniversaries that are coming up this year. Firstly, June will mark seventy five years since General Dwight D. Eisenhower called the Great Crusade which was the liberation of Europe during World War II for their allies. Fifteen thousand men jumped from the sky, and sixty thousand came from the sea to help save the world from the atrocities that were ensuing. Trump than introduced three men that were a part of that heroic endeavour; Staff Sergeant Irving Locker, Sergeant Herman Zeitchik, and Private First Class Joseph Reilly.

Another event that was briefly mentioned was when the Apollo 11 landed on the moon 50 years ago. Buzz Aldrin was in attendance since he was the man who put the American flag on the moon. It was made known that American astronauts will be going back to space on rockets reportedly.

Finally getting to the matters at hand, Trump spoke on the standard of living in the 21st century for Americans and how a better quality of life must be maintained for all citizens. Making communities safer, expanding the middle class, and enriching culture will help bring a better sense of self when combating the issue. Revenge and resistance must be abandoned while making room for endless cooperation for the common good. Trump than brought into play the extreme rift between both parties that has been happening for the past few years. Creating new coalitions and forging new solutions is what the president wants to see, rather than gossip going back and forth.

After this whirlwind statement, Trump briefly discussed his administration and what they have accomplished thus far. The president reminded everyone on how the economy has increased with 5.3 million jobs while having a low unemployment rate for minorities and other individuals. Wages are growing, especially for blue-collar workers which Trump had initially promised. What was interesting about this was how Trump did not just blame the Democrats but both sides for not accomplishing enough over time. That is partially why the administration wanted to improve these standards for Americans so that they can live more comfortably. An economic boom has occurred while adding six hundred thousand new manufacturing jobs which was something people were hesitant on initially. The tax cut that was passed helps families trying to make it while doubling the child tax credit completely.

The investigation drama that has been materializing ever since Trump took office was mentioned, which Democrats were not very happy about. The president indicated that there are over three hundred nominations that have not been pushed through, due to the spectacle existing. Trump brought the topic up since Democrats have the House majority and are trying to open up even more investigations on his business dealings.  “If there is going to be peace in legislation, there cannot be war and investigation,” Trump said. The president was taking a stab at Democrats since they are investigating his every move at this point. If they continue with the charade, Trump will not work together with them on legislation. The statements indicate that he believes the accusations are seen as a security threat. In the end, they have a choice whether they want to help the American people or continue with a moral bias.

A significant area of debate has been the border security issue; Trump reminded Congress that they have only 10 days left to pass the bill that would fund the government, secure the border, and protect Americans from individuals entering illegally. “Now is the time for Congress to show the world that America is committed to ending illegal immigration and putting the ruthless coyotes, cartels, drug dealers, and human traffickers out of business,” Trump said. Caravans are still marching towards the US, Mexico is even helping them by putting individuals on trucks and sending them to the most unprotected area of the border. A total of 3,750 troops were sent to the border to prepare for the colossal descent. The problem at hand is a moral one; Trump clarified that it was a threat to safety, financial well-being, and security for all Americans. The president urges individuals in Congress to use devotion and compassion towards the American people with this issue. Trump wanted to make it known that he does not have a problem with immigrants, but believes they should come in legally through due process. Furthermore, Trump concluded that legal immigrants enrich and strengthen the nation overall. Trump seems very concerned for the migrants who go through atrocities while trying to reach the border. One in three women are sexually assaulted while journeying north. Smugglers have used migrant children as puppets to manipulate there own path into the country. Human traffickers and drug cartels also use the open borders for their gains with prostitution and drug smuggling. Lastly, Trump reminded members of the MS-13 gang and how it operates in at least twenty states, after coming through the southern border. The groups are reportedly being removed but will keep entering the US unless the border is secure. Because of these gangs and illegal aliens, Americans have been murdered left and right. The president said he had suggested a ‘common-sense’ proposal to end the wrongdoings on the southern border. Humanitarian assistance, increased law enforcement, closing loopholes on child smuggling, and a physical barrier were just a few things that are being put forward at this time. Trump again repeated himself by saying past Democrats had voted for a wall in previous history. What he is referring to was the Secure Fence Act of 2006 where Chuck Schumer and past president Barack Obama voted on a fence themselves. However, Trump’s potential wall would again include a see-through steel barrier and will be put in the areas that are identified as high-risk entry points. Trump concludes his long speech on immigration by compromising and working with each party to achieve a successful result.

One of the biggest challenges America has faced for many years is the Middle East and hope for future peace. The approach that had been given is based on realism and not shameful theories that have failed regarding progress. Trump said, for this reason, his administration had acknowledged the true capital of Israel by moving the US Embassy to Jerusalem back in May. Trump continued saying that troops have been fighting in the Middle East for almost nineteen years in total. Over fifty-two thousand troops have been wounded, and seven thousand Americans have given their lives to the war in Afghanistan. Trump reminded Congress that past administrations had spent around seven trillion dollars in the Middle East. ISIS had controlled around twenty thousand miles in Syria and Iraq when Trump began his term. The president announced that almost the entire territory had been liberated from ISIS. With these statements, Trump briefly spoke on how around three thousand troops have left Syria. “It is time to give our brave warriors in Syria a warm welcome home,” Trump said.

President Trump later touched on the issue of abortion and the current law in New York that has recently been passed where infants can be murdered moments before birth. Trump concluded that these children are living and feeling babies that would never get the chance at life in the world due to the law. Democratic governor Ralph Northam was brought up since he stated that he would execute a baby after birth. Therefore, Trump has asked Congress to pass legislation prohibiting the late-term abortion act. After Trump made this statement, many individuals on the Republican side applauded him on his stance for the unborn. Trump ended the abortion question by holding to a fundamental truth that the unborn are made in the image of God.

Throughout the rest of his address, Trump would acknowledge individuals that have gone through suffering but have made it out victorious. Some of these people included Holocaust survivors Judah Samet and Joshua Kaufman. The president would also touch on matters such as NATO and trade relations. Trump achieved the message he was trying to convey towards the American people. “Victory is not winning for our party. Victory is winning for our country.”

About the Author
Chloe Pandora is from Vancouver and will be completing her history BA degree this spring. She writes for the Jewish Independent in Vancouver, Canada.
Related Topics
Related Posts
Comments