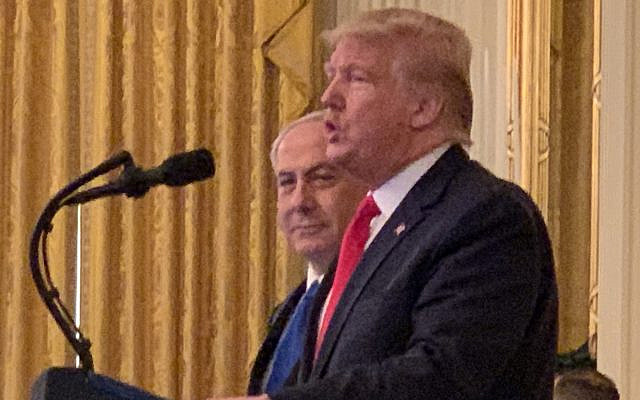 Statehood or Victimhood by David-Seth Kirshner

Today’s world has become a Rorschach test that is more concerned with who said something as opposed to what was actually said.

The announcement about a bold plan for Middle East Peace could easily fall into that dangerous trap. One could paint the moment as mutual political backscratching that will only benefit Netanyahu and Trump in their respective elections. While undeniable, I caution you to fight the urge and unpack the details we know and why we should, and how we can appreciate this moment in history.

I was fortunate to be in the East Room of the White House where it happened on Tuesday afternoon. Below are some of my observations and considerations.

For 73 years, since Israel announced its statehood, it was welcomed with bullets and bombs instead of partnership and possibility. That Heisman style embrace has been one sided. It is high time for a new strategy and refreshed approach to the Middle East.

I believe that the administration has presented the seedlings of such a plan. Remarkably, this plan is endorsed and championed both by Blue and White (Gantz) and Likud (Netanyahu). Together, they represent more than two thirds of the Israeli Knesset. That alone is newsworthy. It is also the first time Israel has agreed on paper to the establishment of boundaries and borders of the Jewish State and the Palestinian State. This historic moment should not be diminished

This plan seems fundamentally different than Oslo, Camp David, Wye and Annapolis primarily because the vantage point of Israel was one of which detailed security measures would ensure her safety and would not uproot Israeli life or safety. Those factors include:

1. Palestinian Leadership recognizing Israel as the Nation State of the Jewish People.
2. Israeli autonomy and military control over the Jordan Valley.
3. Continued access to Jewish and Christian holy sites, including Shilo, Bet El and Hebron.

These can be achieved with some first-time opportunities for the Palestinian people. They will be able to claim a State within four years’ time with East Jerusalem as its capital. The United States will establish an Embassy in East Jerusalem where other countries can follow suit. Additionally, $50 Billion of aid in the form of grants, loans and investments will be offered to the Palestinian People for infrastructure and growth. I cannot imagine a mother in Ramallah that would not well up with tears considering the opportunities such an investment would offer her children. Salaam Fayyad, the former Prime Minister of Palestine, was a passionate proponent of infusing the economy so that purpose and opportunity will abound for the Palestinian people. Sadly, he was removed from his role before his plan could take form.

Some things have to happen before this can be realized.

First, the Palestinians need to take a serious and contemplative look at the offer and negotiate. Sitting out in protest has yielded no results, to date. Time has proven that Israel will not sit idly by and wait for their neighbors to engage in talks to consider growing infrastructure, developing relationships with Arab neighbors or strengthening their army and resolve.

While the Palestinians have pouted for the past 53 years, Israel has been watering the dessert and watching it bloom. As Palestinians have been writing propaganda against the State of Israel and Jews in their schoolbooks for kids to be brainwashed, Israelis have been chronicling their achievements and inspiring the next generation to dream big and reach for the stars. Palestinians have threatened to pursue baseless criminal charges against Israel in International Court while neglecting local civic opportunities for development of schools, hospitals and roads to help its citizens.

Secondly, the Palestinian people must choose between establishing statehood or continued victimhood.

The former entails denouncing and dismantling all terror and terror infrastructure. It means defanging Hamas and Islamic Jihad and demilitarizing evildoers. It means changing textbooks that call for incitement against Israel and the Jewish people and censuring Imams and political leaders that preach hate. It requires Palestinians to establish human rights for its citizens. Lastly, but perhaps most importantly, it demands that the Palestinian State recognize the right for Israel to exist and to do so in peace and safety. The former means nothing changes. Where has that led?

If these simple steps occur, the Palestinians will double their footprint within Area C, solidify their place within Areas A and B, and work in concert with the IDF to maintain calm and peace in the region which is mutually beneficial. The plan maps out a rail line connecting Gaza and the West Bank, making the families within these places connected and contiguous. Most importantly, it gives the opportunity for Palestinian and Israeli children to dream of a better tomorrow.

For Palestinians, the poverty line has climbed to a place where one out of every four are below it. This plan and the influx of resources to a future Palestinian State supplants stone throwing with crop planting; building for bombing. It is a tangible opportunity for the Palestinians to shape their destiny. Equally, Israelis are exhausted from decades of fighting and hatred that has yielded nothing positive on either side. Tomorrow can and should be a brighter day for the young, innocent children of these two countries.

The plan thoughtfully and carefully details a path where no current home of any Palestinian or Israeli will be uprooted. There will be a four-year settlement freeze to demonstrate the possibilities of growth for the Palestinian people so it cannot move the goal-posts mid game. Further, it solves the Palestinian refugee problem outside the borders of Israel.

Israel has been adamant on maintaining control over the region based on the historical realities on the ground and for sound reason. When Israel pulled out of Lebanon, Hezbollah amassed 150,000 rockets and aimed them southward. When Israel unilaterally left Gaza, Hamas rose to power and launched more than 10,000 rockets on neighboring Israeli civilians. In Gaza, greenhouses and synagogues were pillaged when they could have been transformed for something better. The vacuum left from pulling out of territory has always been fertile for bad people to infiltrate. Maintaining a security presence closes that opportunity.

Sadly, the Palestinians have pronounced this plan dead on arrival, without ever seeing the document, accepting the call of U.S. leadership or triaging the proposal. They have refused to come to the discussion table for the past 18 months. If they were there, they would have been surrounded by brethren. Bahrain, Oman and UAE were all in the East Room next to me this afternoon when the plan was unveiled. They applauded and rose to their feet in anticipation and opportunity. Saudi Arabia later announced its commitment to working with the plan as a starting point. These countries are committed to working with Israel and the United States towards turning this dream into a reality. It was the dawn of a new day. I predict that Egypt and Jordan will join them around the table soon, and model leadership for the Palestinians to follow. I can only hope the Palestinians will follow the lead. Golda Meir said that the Palestinians rarely miss an opportunity to miss and opportunity. I hope this time is different.

These words on paper, the countless editorials and pundits chiming in here and there, or the jagged graph on the map will all aim to simplify an old problem. It cannot be simplified or boiled down to a tweet or an elevator pitch. The problem is complicated, just like the plan itself. The region is complicated. The history of the Jewish people and the Palestinian people are complicated. This initiative needs attention, patience, energy and elbow grease. Let us focus on the message more than the messenger. History will demand that of us.

What this moment does have, beyond the support of both leading parties in Israel, is enthusiasm from many in the Jewish and pro-Israel world. This is not new. We are a people fashioned by hope. That is why Hatikvah is our anthem. We were bright eyed and cautiously eager in Oslo, Wye, Madrid, Annapolis and we are today, too. We remember a prayer of “Next year in Jerusalem” that turned into a reality before our eyes. Our prayer today is that our neighbors will realize the potential of turning prayers and dreams into realties, and together we craft a new and better world for future generations to inherit.

May the history of this moment be appreciated by all parties and may the opportunities be seized. May it bring an end to bloodshed and shine peace on the State of Israel, the future State of Palestine, and all humanity.

About the Author
David-Seth Kirshner is the senior rabbi of Temple Emanu-El, a Conservative synagogue in Closter, New Jersey. He is the past President of the NY Board of Rabbis, President of the NJ Board of Rabbis and a Senior Rabbinic Fellow at the Hartman Institute. Rabbi Kirshner was appointed to the New Jersey/Israel commission and is a member of the Chancellor's Rabbinic Cabinet at the Jewish Theological Seminary.
Related Topics
Related Posts
Comments