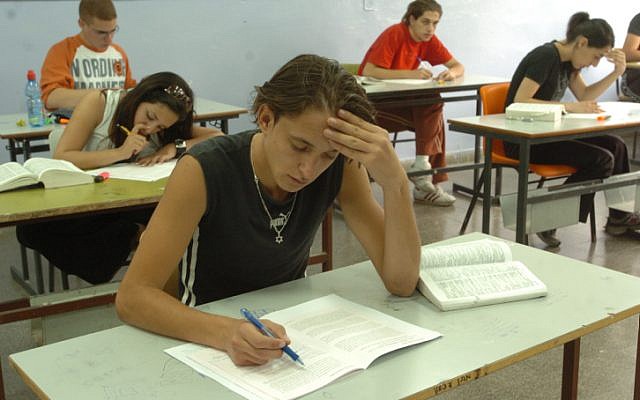 Illustrative: A student takes a test in a school in Jerusalem (Flash90)

In today’s academic world, teachers are increasingly relying on digital forms of communication to transmit critical (and not so critical) information. In the “old days” teachers sent home reports a few times per year, and parents attended “Back to School Night.” Between these two methods, parents knew what they needed. If a student was not doing his work, then maybe the teacher would call home. Today, with our laptops, tablets, and phones combined with email, Facebook, and WhatsApp, it is extremely easy to communicate even the most trivial information. There are times however, when that “ding” sound which tells us we have a new message, makes us want to throw our phones out the window. We all know full well however, that this is the world in which we live. There is no escape. So, in a world where information is shared on a regular basis, and a person is reachable almost 24 hours a day, how do we maintain a polite tone, without spending every waking minute of the day replying to emails and texts?

There is a certain teacher at a local school who we joke must be permanently wired to her phone. For those parents who have the pleasure of having a kid in her class, we know everything! She sends emails with photos on a constant basis. While it is always nice to see your child doing his work, there is a point when enough is enough.

In general, this teacher is very good at what she does, and no one wants to insult her by telling her to stop with the constant barrage of emails. So, what can we do?  Most email platforms including Outlook and Gmail give users the ability to create rules/filters. These rules will automatically place emails from certain people or with specific subjects in a pre-selected folder. My wife and I both set up a special folder for this teacher. Now, whenever we receive one of her emails, it waits in a special place until we have a chance to look. If the subject of the email is irrelevant or not interesting, we can also press the “Delete” key without hurting the teacher’s feelings.

Replying to messages can sometimes be time consuming and just plain annoying. Sure, it is easier to just ignore the message, but as we all know, it will not go away on its own. While not all emails require a response, there are emails and messages that clearly ask for a reply. Sure we get it, no one wants to volunteer to chaperon the upcoming trip, but ignoring the messages, will not make them go away. If you receive an email that asks you to respond, it is important that you give some type of response within 24 hours.

Some would argue that no response sends a message. While this is true, it is usually not the message you want to send. I have a former colleague who sent out emails when volunteers were needed for various class projects and trips. There were parents who always volunteered and some that due to work schedules, were not able. Then there was a third category of parents who just ignored the requests. This is not a good way to develop a working relationship with your kid’s teacher.  If someone asks us a question, it is rude to ignore them. The same is true with emails or texts. If you receive an email that is completely uninteresting or irrelevant, send a response and explain that while you appreciate the offer, you are not interested. This takes a minute to do, and can spare a lot of hurt feelings later on. If my friend the teacher had received an email from a parent stating that they are not interested in volunteering, he would have stopped asking. Schools especially are always looking for volunteers. From the organizer’s point of you, it can be very demoralizing not to receive responses. If you receive a personal email asking for help or to provide items, don’t just ignore the message.

Thanks to WhatsApp, we can now send texts to groups and individuals with the click of a button. Sounds easy and simple, but those of us who are WhatsApp users know that being a member of multiple groups can be both time consuming and downright annoying. My son’s teacher thought it would be a great idea to create a class WhatsApp group for all of the parents. The problem was that any time someone responded, I received a notification. After being a member of this group for only a day, I began to dread that noise. The remedy of course was to place the group on “silent” so that I was not notified of every posting. The problem though is that when the teacher actually posted an important piece of information, I missed it, as I was not always willing to read through the trivial nonsense of the other posts.

What can we learn here? If you are a member of a WhatsApp group, post the essential information, nothing more and nothing less. Other members most likely do not care about your personal issues or stories. If you need to share important information, then go for it. Keep group WhatsApp conversations down to the basics. This way, the important messages will not be missed. You can always send a separate message “off-list” to a specific person. After weeks of trivial postings, I actually spoke to this teacher about my frustrations. She had no idea and thanked me for the feedback. She then posted a message to the group, asking people not to respond to the entire group. Since then, I have actually been able to turn the notifications back on.

The relationship between you and your child’s teacher is extremely important. Almost all teachers are working far beyond their official hours. Digital communication tools help make them more efficient and can improve their productivity. Even when the messages may get annoying, take a moment to think about it from the teacher’s point of view.