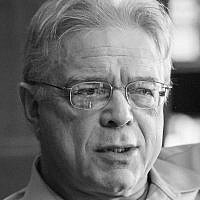 The Blogs
Joshua Muravchik
Apply for a Blog
Please note that the posts on The Blogs are contributed by third parties. The opinions, facts and any media content in them are presented solely by the authors, and neither The Times of Israel nor its partners assume any responsibility for them. Please contact us in case of abuse. In case of abuse,
Report this post.

The cover of Edward Said's Orientalism contained a detail from the 19th-century Orientalist painting The Snake Charmer, by Jean-Léon Gérôme (1824–1904). (PD via Wikipedia)

The hottest flap in American academia this semester revolves around the decision of the chancellor of the University of Illinois to block the appointment of Steven Salaita to a tenured professorship on the grounds of his comments on Twitter during this summer’s conflict between Israel and Hamas. eThe chancellor drew a distinction between free speech and “disrespectful words . . .that demean and abuse.”

Salaita’s offending torrent of tweets began with the kidnapping of three Israeli teenagers in June. “You may be too refined to say it, but I’m not,” wrote Salaita. “I wish all the fucking West Bank settlers would go missing.” Then, during the fighting, he poured forth an endless stream of accusations that Israel was committing “genocide” and that America was under the control of Israel. “Israel slaps around the USA, and all [Republicans] do is ask for more,” said one. “Redneck . . . slogan . . . Gaza is a disaster but Netanyahu is my master,” said another. A third read: “Israel’s message to Obama and Kerry: we’ll kill as many Palestinians as we want, when we want. p.s.: fuck you, pay me.”

If the theme of Israeli control of the United States carried a whiff of anti-Semitism, the aroma wafted even stronger from Salaita’s Goodreads review (spotted by David Bernstein) of Abraham Foxman’s 2009 book, The Deadliest Lies: The Israel Lobby and the Myth of Jewish Control. Salaita quipped “It has to be one of the few books ever published in which the author’s body of work so adeptly undermines his thesis.” Although the syntax is garbled, Salaita’s meaning was clear: the work of the Anti-Defamation League, to which Foxman has devoted his career, proves the reality of Jewish control. If this Jew-baiting was thinly veiled, Salaita dropped all compunction this summer when he tweeted: “Zionists: transforming ‘antisemitism’ from something horrible into something honorable since 1948.”

Defenders complained that Salaita ought not to be held accountable academically for his tweets, while critics like Tablet’s Liel Leibowitz brought evidence that Salaita’s putatively scholarly work has the same tone and quality as his tweets. Martin Kramer offered this example: “It is well known by Palestinians,” writes Salaita, “that anytime one of them enters or exits Israel, regardless of nationality, he or she will likely undergo an anal or vaginal probe. These probes… aren’t intended to be pragmatic. They are acts of psychological domineering and political assertion.” This is, of course, sheer invention. Were there even a shred of truth to it, every human rights group you can think of would have been shouting to the rooftops: however oppressed they may be, Palestinians do not keep their knowledge of Israeli abuses to themselves.

This bizarre example is taken from Salaita’s book, “Israel’s Dead Soul,” published by Temple University Press. His other titles listed on Amazon are: “Anti-Arab Racism in the USA”; “The Holy Land in Transit: Colonialism and the Quest for Canaan”; “The Uncultured Wars: Arabs, Muslims and the Poverty of Liberal Thought”; “Modern Arab-American Fiction”; and “Arab American Literary Fictions, Cultures and Politics”. Now here’s the punchline: the professorship that had been offered to Salaita was in American Indian Studies.

How did we get here? It turns out that the head of the American Indian Studies department, who apparently pushed the appointment through until it reached the chancellor’s desk, is an ideological soulmate of Salaita’s. This department chairman, Robert Warrior, whose advanced degrees are all in religion and theology, lists himself as Professor of American Indian studies, English and History, as well as teaching something called simply “theory.” Salaita, whose writings are overwhelmingly about Arabs and Israel and who was listed as a teacher of English in his last job, is apparently reaching for similar breadth. What really joins these two polymaths is Edward W. Said, of whom both are disciples.

Salaita and Warrior are of little importance except as symptoms of the immense and corrosive impact on American academia of Said. A review in The Guardian in 2001 called Said “arguably the most influential intellectual of our time,” and Nobel laureate Nadine Gordimer said in 1999 that he was “among the truly important intellects of our century.” An online search of syllabi a few years ago found 868 separate courses at American universities in which his books were assigned; there are courses at some major universities devoted solely to his thought; and Cambridge University Press has even published “The Cambridge Introduction to Edward Said”.

Yet the man’s work rested squarely on an intellectual fraud. Its cornerstone was his canonical book, Orientalism, purportedly a survey of the western discipline of oriental studies, in which he argued that “every European, in what he could say about the Orient, was . . . a racist, an imperialist, and almost totally ethnocentric.” Elsewhere in the book he said that his generalizations about Europeans applied equally to Americans. Said claimed to prove his indictment by offering a variety of quotes from a variety of Europeans. But experts showed that Said misrepresented the work of some scholars and misquoted others. The still deeper problem was that many of those Said quoted had no standing in the field of oriental studies, while other towering figures whose writing was admiring of Arab and Islamic culture were omitted. For example, Ignaz Goldziher, a Hungarian Jew, called by some the founder of Islamic studies in the West but passed over by Said, wrote in his diary during his time in the Arab world:

I truly entered into the spirit of Islam to such an extent that ultimately I became inwardly convinced that I myself was a Muslim, and judiciously discovered that this was the only religion which . . . can satisfy philosophic minds. My ideal was to elevate Judaism to a similar rational level.

When challenged on such omissions, Said replied testily that he could not mention “every Orientalist who ever lived.” But of course he was obligated to include a figure of Goldziher’s stature all the more, were he a genuine scholar, because it confounded his hypothesis. He was obligated moreover thanks to his own broad generalizations. Had Said written merely that some Westerners had pejorative attitudes toward other cultures, he would have said nothing new or interesting and would not have achieved fame. It was his claim to reveal something endemic to Westerners that gave his work its explosive character.

The implications were nailed by Sadiq al-Azm, a Syrian Marxist philosopher (and on of that country’s most admired dissidents) who wrote:

Said . . . . trac[es] the origins of Orientalism all the way back to Homer, Aeschylus, Euripides, and Dante. In other words, Orientalism is not really a thoroughly modern phenomenon, but is the natural product of an ancient and almost irresistible European bent of mind to misrepresent other . . . cultures . . . in favor of Occidental self-affirmation, domination, and ascendency.

He might have added that if this bent of mind preceded Christianity, it is not a product of Western culture as we know it, but of Europeans ethnically. In other words Said’s work boils down to the proposition “all white people are inherently racists.” Not only does this itself seem like a racist proposition, but it is problematic in another way: if racism inheres in the DNA of white people, can they be blamed for it—as Said did so thunderously?

Despite the contradictions and the scurrilous methodology, Said’s claim resonated with the guilt felt by Europeans over colonialism and by Americans over Jim Crow and slavery—a guilt that would have been more valuable had it emerged when these evils were still practiced rather than after the fact. This elevated him to iconic status. As Salaita put it in a eulogy: “those who are concerned with the fate of humanity must believe that Said was correct, because if he wasn’t, then there is nothing [worthwhile] for humans to aspire to.”

The result has been a generation of Said epigones dominating American and European universities, exemplified by Professor Warrior and by Steven Salaita, whose turbid writings are not so much sprinkled with the word “racism” as flooded with it. He knows that racism is endemic, that Israel is racist, and that because of this anti-Semitism is “honorable.” With such deep knowledge as this, is he not qualified to teach in almost any discipline?

About the Author
Joshua Muravchik is the author of "Making David Into Goliath: How the World Turned Against Israel"
Related Topics
Related Posts
Comments