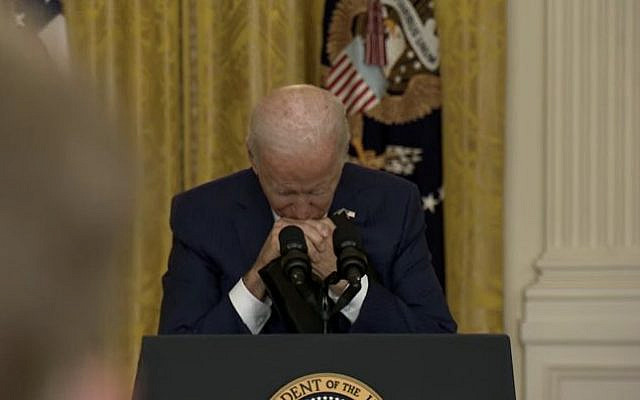 A defining image for the Biden presidency. Credit: Twitter/Matt Whitlock

No one cares. No one cares that President Biden shouts at press reporters, threatens violence against them, refuses to take questions from them, or that he takes ‘zero responsibility’ for the disastrous withdrawal from Afghanistan when challenged by them.

No one cares that President Biden had a phone call with then-Afghan president Ashraf Ghani, urging him to project untrue sentiments regarding the battle with the Taliban. CNN, MSNBC, NBC, CBS, and ABC have all completely ignored the story that was broken by Reuters a few days ago.

No one cares that illegal immigration is up, inflation is up, more Americans have died of COVID-19 this year than in 2020, or that employment numbers this month were almost a third of what the administration was expecting – with Black unemployment on the rise after years of steady decline.

At least the mean tweets are gone.

I have been aghast for the last nine months over the number of times President Biden – looking and sounding tired, confused, or angry – would shout at the press or ignore them entirely. I have been annoyed when his blatant lies are placed back-to-back by internet users because mainstream fact-checkers aren’t doing their jobs. I am saddened to see such a lack of leadership coming from the White House as it faces a flurry of crises with no clear message or authority to help itself and the country’s citizens.

Just this week, even CNN had to admit that the President lied about visiting Pittsburgh’s Tree of Life Synagogue after the 2018 mass shooting – even if official ‘fact-checkers’ like Snopes and Politifact remain silent following his lie. USA Today was forced to issue a correction on its initial fact-check saying he didn’t check his watch multiple times during a ceremony for fallen soldiers when multiple sources debunked their attempt to hide it.

I’m frustrated not because I believe the Trump administration was much better. It’s because I’m sick of Americans believing that it was so much worse than what the country has now.

I suppose I shouldn’t be surprised. Voters turned out in record numbers to get Trump out of office after four loud years of sensationalism and outrage. They were tired and wanted a break. But I fear in their desire for normalcy, they have been misled and received something far from it.

The President is absent. We can twist and turn narratives all we want but the facts are there. He doesn’t take questions from a press that, even on its harshest days, is kind to him. He vacations in Delaware while Kabul is overthrown, and doesn’t seem empathetic towards the 13 fallen heroes who lost their lives at the end of a two-decade war. Beers were poured across the country in their honor – drinks that they themselves would be too young to drink.

Critics of Biden are, indeed, far and wide. Coverage by Fox News and NY Post is predictably harsh, and commentators from New Media outlets on Youtube and Spotify rack up millions of views in their criticisms. But what irks me most is the intellectual dishonesty of voters across the country and commentators across the world that won’t admit that if Biden’s predecessor did half the things Biden is doing, he would have had his third impeachment by lunch.

And it’s not just the media that is to blame for this. Democrats, to their credit, never stopped trying to take Trump down. From a $32 million inconclusive investigation into Russian Interference in the 2016 election to the impeachment due to a phone call with a foreign leader, they had him fighting back until his final days in office.

If Republicans had half the courage they could go back to winning elections again. Senate Minority Leader Mitch McConnell has already said that Biden will not be impeached for his actions in Afghanistan. To break the rule of my own headline, if President Trump had gifted foreign enemies with tens of millions of dollars of military equipment while abandoning citizens overseas, do you really think Nancy Pelosi would miss an opportunity to hold her opponent accountable?

Still, this is the same House Leader who ripped up Trump’s 2020 State of the Union speech which contained the names of America’s last surviving Tuskegee Airmen and celebrated a service member’s reunion with his family, so perhaps she just doesn’t care when the guy in charge is on her side, regardless of the results the world is getting.

We can hold President Biden accountable for his actions, and we should for the time he is in office, but it’s time to put to rest the idea that anyone even cares that outrage should be matched this time around. People don’t want to be outraged anymore, so they will no longer report on rising numbers of ‘kids in cages’ this year, nor will they demand that the president gets impeached for conducting a quid pro quo over the phone with a foreign leader.

When I was younger, I used to joke with my college buddies that ‘I found outrage outrageous’. While it pertained to political correctness at the time, the sentiment was felt during the Trump years every time the media claimed he was an existential threat to democracy, the planet, and our lives.

Today, the inverse is true and the lack of outrage is steering my feelings. My outrage rests in the shadows – far from a muted media landscape and elite political bubble that is attempting to gaslight us into believing that what we are seeing is normal and the results we are getting are good.

I expect I’m not alone.