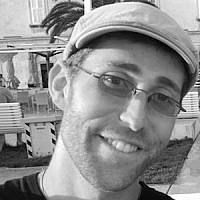 This morning the IDF denounced the arson of two West Bank homes at the hands of Jewish terrorists. A 1 year old died in the fire.

Thousands of soldiers are currently searching for the terrorists.

MK Naftali Benett, the political leader of the religious right, called it a, “criminal act of terror,” and pushed for the arrest of the terrorists.

Prime Minister Benjamin Netenyahu stated that he, “will do everything to catch the murderers,” and that he is shocked by the incident.

Remember when we studied 20th century Europe to find out what caused so many people to be passive in the face of unthinkable cruelty?

Remember when we found that it started with language? That referring to Jews as a single subhuman consciousness lead to their inhumane collective treatment? That comments in newspapers, jokes at work, dinner party conversations slowly desensitized good people to unjust violence?

When I moved to Jerusalem I took a taxi from the airport to the Absorption Center. The taxi driver, noting different areas of the city, pointed to an Arab village and said, “There live the dogs.”

At the Absorption Center orientation we were told, “No loud parties, no drugs or alcohol, no Arabs in the building.”

Where do we think we’re going? Israel is light years away from perpetrating a holocaust. But we have crazies who want one, and they’re getting stronger. Because we let them.

Israel is a fantastic country. Israel is not a racist country (as is demonstrated by our democratic laws and institutions). It’s that, as a people, Israelis are OK around racism. We hear bigotry, and we keep silent. So it progresses. It grows between the cracks of our conscious thoughts. It creeps into our minds and becomes part of our day-to-day language. It spreads throughout our actions, lives, and identities. We can’t be surprised that our rhetoric led us here.

Whatever we wish Muslims would do to stem the tide of Islamism, it’s on us to do that now before Judaism becomes a thing.

Yes. Iran’s government poses a nuclear threat. Yes. Hamas torture Gazans and blame Israel. Yes. We constantly deal with local Islamist terrorism. But we have an army. We have a police force. Justice doesn’t need to come from street gangs. And justice isn’t served by punishing these people for what those people do. Learn the difference between someone from Iran and someone from Gaza and realize that burning down houses in revenge is what the KKK does.

So let’s be appalled. Be disgusted. Be ashamed. But let’s not be shocked.

Our nation is guided by the chit-chat that falls on our kitchen floors. Let’s be responsible for it.

Check out the Israeli institutions on the right side of the argument: