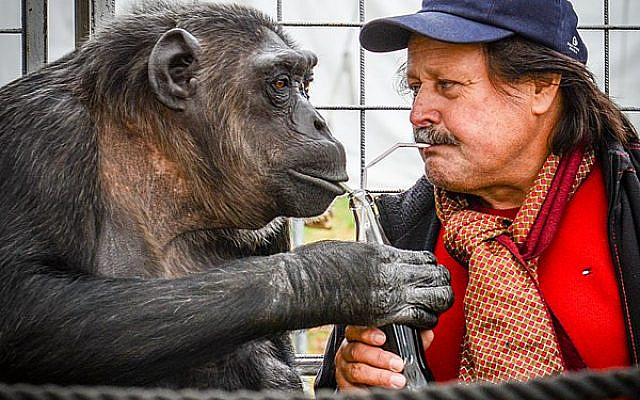 “Boychick, did ya know that one of my favorite sayings is: ‘Now, I’ve heard it all?'”

“And did ya know that a week or so later, I hear some other monkey, ape or gorilla saying something more outlandish than the last unbelievably stupid thing I heard.”

“Well, this week, Lara Logan took home the simian prize for lying and making crap up.”

I scratched my scalp and asked, “Lara, who?”

“Lara Logan. She’s a correspondent for Fox News streaming service at Fox Nation. Before her fall, Logan once worked for CBS News. Now, she’s known for comparing Anthony Fauci to Josef Mengele and blaming the Ukrainians for the Russian invasion of their country.

“Mort, she should be thrown off the air into a pile of monkey dung. But I still have never heard of her. But I bet the chimps that watch Fox News believe all her crap.”

“Well, now Lara has suggested that Darwin’s theory of evolution is the result of a wealthy Jewish family’s money.”

Puzzled I asked, “Mort, is that a bad thing?”

“Boychick, I haven’t got a clue. But I guess Lara Logan thinks so. And so do about half of American adults that don’t accept the theory of evolution. They take the Bible literally. Bible thumpers can’t accept that chimps are their distant relatives.

“Wow! That’s a whole bunch of Americans. I wonder if that’s the same group who voted for Trump?”

“But Mort, let’s get back to Mrs. Logan, who has blamed Darwin’s evolutionary theory on the Rothschilds. It seems like the anti-Semites always blame the Rothschilds for everything, except when they’re blaming George Soros,”

“Lara also claimed these ‘wealthy Jews’ paid Charles Darwin to devise an explanation for our kinship with monkeys, apes and gorillas. She never told us what the Rothschilds’ motive was but here’s what she did say:

Does anyone know who employed Darwin, where Darwinism comes from?

Look it up: The Rothschilds. It goes back to 10 Downing Street. The same people who employed Darwin, and his theory of evolution and so on and so on. I’m not saying that none of that is true. I’m just saying Darwin was hired by someone to come up with a theory — based on evidence, OK, fine.

Well boychick, I looked it up.

Lara is so full of it, that it’s coming out of her ears.

Charles Darwin was invited by a Gentile friend and botany professor to join the HMS Beagle, a British naval ship, on a self-funded, five year scientific voyage. No Jews were involved!”

“So Mort, the Jews get no credit for funding the brains behind the theory of evolution, “I asked.

“Not one scintilla, none, nada unless you watch or listen to the Fox News Network?”

“Mort, ya mean the same people who employ Lara Logan—as she spouts her Darwin Jew-funded hoax theory—still call themselves a news network?”

“Yup and so on and so on. I’m not saying that nothing on Fox is true. I’m just saying that Fox is paid for by someone and based on the evidence, it’s the chimps or the chumps that watch the network.