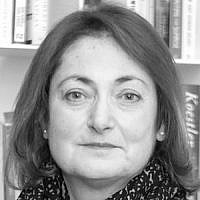 The Blogs
Dina Gold
Apply for a Blog
Please note that the posts on The Blogs are contributed by third parties. The opinions, facts and any media content in them are presented solely by the authors, and neither The Times of Israel nor its partners assume any responsibility for them. Please contact us in case of abuse. In case of abuse,
Report this post.

Two former SS officers in their 90s who were charged last week with participating in hundreds of murders at the Stutthof concentration camp in Nazi-occupied Poland may not actually see their day in court. But I hope that the case will prompt wider interest in others – both companies and individuals – who were complicit in what these men are now accused of.

Stutthof, located outside the city of Gdansk, was a comparatively small camp though 65,000 people died there between when it was set up in 1939 and liberated in 1945.  But it gets a mention in the 2016 paperback edition of my book “Stolen Legacy: Nazi Theft and the Quest for Justice at Krausenstrasse 17/18, Berlin” about how, in 1937, the Victoria Insurance Company, which still exists, forced the sale of my family’s business headquarters in central Berlin and transferred ownership to the Reichsbahn, Hitler’s railways.

Apart from foreclosing on Jewish property, the wartime record of the Victoria was also noteworthy for its participation in an insurance consortium providing cover for the workshops of the SS-owned Deutsche Ausruestungswerke (DAW), or German Equipment Works, which employed slave labor at Auschwitz, Buchenwald – and Stutthof.

The chairman of the Victoria from before my family’s building was seized, through the war years, and even in post-war West Germany, was Dr. Kurt Hamann. Although not apparently a member of the Nazi Party, he was sufficiently prominent in Hitler’s regime to be worthy of an entry in the secret British War Office booklet “Who’s Who in Nazi Germany.” And these days his name lives on – an insurance research institute at Mannheim University is named in his honor.

Ever since the hardback edition of my book was first published in 2015, I have been in correspondence with the Rector of Mannheim University, Professor Ernst-Ludwig von Thadden, about the appropriateness of having an institute honoring Dr. Hamann. Claiming bureaucratic obstacles and the need to commission historical research, a decision has been postponed several times.

The AP report of the charges facing the as yet unnamed former guards noted “both served as guards and also watched over prisoners who were taken outside the camp to work.” A wartime map of the Stutthof camp is on Wikipedia. It clearly shows the DAW workshops adjacent to the camp.

New legal reasoning allows German prosecutors to charge Nazi collaborators even if there is no evidence of specific criminal acts.  The accusation of having assisted in the operation of a camp, such as guarding the victims, is sufficient to enable a prosecution to be launched.

One of the men charged served at Stutthof from June 1942 to September 1944; the other was there from June 1944 to May 1945.  The British “Who’s Who in Nazi Germany,” now available at the National Archives in London, was published in 1944.  I have copies of the insurance documents, obtained from German official archives, dated November 1944, showing the Victoria having a 10 percent share in the consortium providing insurance for DAW workshops at Stutthof.  It was for coverage against fire.  There is no suggestion that the slave labor was worth insuring.

In July 2016, I succeeded in having a plaque placed on the front of my family’s former Berlin building, now a government ministry, noting its history.  I am still hoping I can get any equivalent mention of Dr. Hamann removed from the walls and website of Mannheim University.

Washington DC based, Dina Gold is the author of “Stolen Legacy: Nazi Theft and the Quest for Justice at Krausenstrasse 17/18, Berlin” published by the American Bar Association.