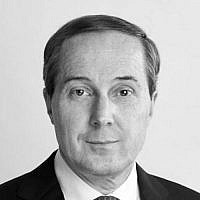 The Blogs
Alexander Knoops
Apply for a Blog
Advertisement
Please note that the posts on The Blogs are contributed by third parties. The opinions, facts and any media content in them are presented solely by the authors, and neither The Times of Israel nor its partners assume any responsibility for them. Please contact us in case of abuse. In case of abuse,
Report this post.

She herself considers that Palestine has the status of a ‘State’ in order to be able to invoke the ICC’s jurisdiction. Israel’s position is precisely the opposite; that the ICC does not have jurisdiction to rule on this issue because there is no sovereign Palestinian state. The final verdict on this issue is now in the hands of a so-called “pre-trial chamber” composed of three judges.

In the meantime, the Palestinian Authority, Israel and the alleged victims in the situation of Palestine have been invited to submit written comments to the judges before 16 March 2020. If Israel will refrain from submitting a formal defense, it is possible to have the defense done by external parties, called amicus curiae (friends of the court). The amicus curiae are not formally litigants, but they can give their views on the legal question in question by means of a written commentary.

In the situation of Palestine, the judges of the ICC have opened this possibility until 14 February 2020. This possibility has been used by seven countries: Germany, Australia, Austria, Brazil, Czech Republic, Hungary and Uganda. Importantly, these seven countries all took the position in their applications that the Palestinian Authority does not have the power to transfer jurisdiction over its territory to the criminal court. The position of these countries is opposed to amicus curiae observations by the Arab LIGA and the Organization of Islamic Cooperation, which, on the contrary, argue that Palestine is a sovereign state and that the criminal court therefore has jurisdiction and can continue an official criminal investigation into the Israeli Palestinian conflict. Among the academics who also requested to act as amicus curiae, there was disagreement on the competence of the International Criminal Court in this matter.

The question of whether Palestine is recognized as a sovereign state under international law can be answered, inter alia, by reference to the 1933 Convention (the Montevideo Convention on the Rights and Obligations of States), which lays down what an entity must comply with in order to be a state under international law. The requirements to be recognized as a state under international law include a permanent population, a defined territory, a government and, finally, the capacity to establish relations with other countries. The Criminal Court may find that Palestine does not meet all the requirements. In addition, it is questionable whether, in terms of its competence, the Criminal Court will lend itself to an issue that is in fact very politically complex and intertwined with the need for further political dialogue. An international criminal procedure is not exactly the instrument to solve a politically controversial issue.

After 16 March 2020, when all amicus curiae comments have been submitted to the criminal court, the prosecutor may respond within two weeks. After that, the file will go to the three judges who will have to make a decision within 120 days, according to the rules. This means that mid July 2020 the final verdict will be made.

In short, even without such amicus curiae positions, the three judges of the criminal court who will soon have to answer the fundamental question of jurisdiction, could come to the conclusion that the criminal court does not have jurisdiction. However, observations of this kind by “friends of the court” could possibly influence the judges’ view. Despite the fact that there are now seven countries that support the position of the Israeli government, in a case of this importance, it would be good if the country in question, Israel in this case, were to put forward its own defense and not implicitly leave it to other countries as a substitute. This substitution of defense may be a strategy, but it is not necessarily the most effective one. Conducting one’s own defense, without recognizing the legitimacy of the criminal court, in addition to the amicus curiae, would be the most optimal in this case.