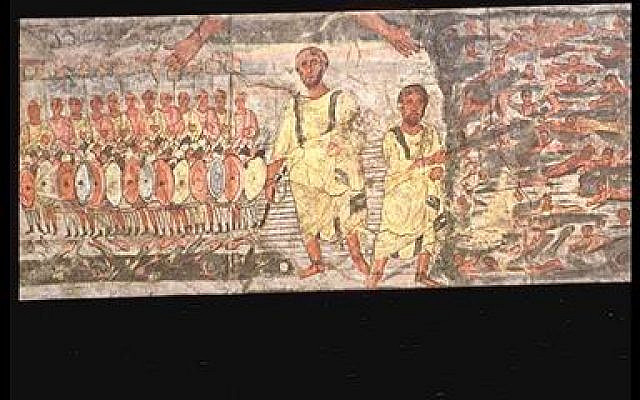 As far as the ancient rabbis were concerned, the crossing of the Red Sea was an even greater event than the Exodus from Egypt. The Exodus had removed the Israelites from Pharaoh’s grasp, but as long as they were still on Egyptian territory, they could still be captured and brought back. It wasn’t till they crossed the sea, a barrier that proved impenetrable to the Egyptian army, that the Israelites could be truly certain that they were safe.

That is why in the Passover Haggadah we see a competition among the rabbis, each trying to outdo the other in proving how many miracles took place at the Red Sea.

As far as we know, the original source for the competition between the rabbis is the Mechilta, the earliest commentary on the book of Exodus. Compiled in the 3rd century CE, the Mechilta preserves rabbinic discussions from a century before, in the years following the Bar Kochba revolt, when the Romans were clamping down viciously on the rebellious Jews. The period is known as the Hadrianic Persecutions. We can get a sense of what it was from an exposition in the Mechilta by Rabbi Akiva. Expounding the phrase from the Song at the Red Sea. “This is my God and I will glorify him,” Akiva said:

I shall speak to the nations of the world of the beauty and the praise of he who spoke and brought the world into being. The people of the world ask Israel (Song of Songs 5:9) “How is your Beloved different from all other beloveds” that you thus die for Him and are slain for Him…so that you say, (Psalm 44,23) “We are slaughtered for you every day.”

After asking why they are prepared to die for God, the nations exhort Israel to abandon him. They say: “You are attractive, you are mighty, come and join us.” But Akiva’s Israelites will have none of it. Drawing out the full force of the phrase he is expounding: This is my God and I will glorify him” Akiva has the Israelites ask: “Don’t you recognise him?” He quotes the Song of Songs: “My Beloved is white and ruddy, distinguished among legions”. This time the nations are convinced. “Let us go with you,” Akiva has them say. But his Israelites refuse. Again he quotes Song of Songs: “My Beloved is mine and I am my Beloved’s.”

The conversation that Akiva has constructed between Israel and the other nations is based on their exclamation at the Red Sea: “This is my God”. Akiva assumes that by using the word “this” they are pointing at something that has been revealed to them. . He quotes from Song of Songs, which elsewhere he has described as a sublime description of the love between God and Israel, to show how Israel refuse to be seduced by the other nations.  They insist on maintaining their unique relationship with God, to the exclusion of everything and everyone else. And they do this despite the daily slaughter they are suffering at the hands of the Romans.

Of course in the real world, the nations are completely unaware of Akiva and his exposition. He is talking to his own people, telling them that despite the horrific circumstances in which they live, their love for God, and his love for them will sustain them. Everything will be all right as long as they continue to remain true to the Almighty.

Akiva preaches this message in case his people are not as convinced of God’s love for them as he would like them to be. This is one of several Midrashic passages in which we see Akiva using motivational psychology to boost the lagging faith of Israel. The whole exposition is set in the context of the crossing of the Red Sea, not only because of the key phrase This is my God, but because of the miracles at the Red Sea; far more numerous than those of the Exodus. The miracles that saved Israel at the Red Sea, implies Akiva, were not serendipitous. They were a direct consequence of their religious faith, of their love of God, even in the most trying of circumstances.