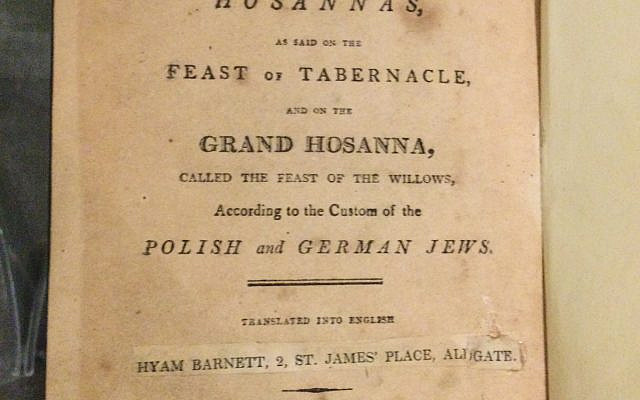 The same Hoshannot booklet template reprinted by a Hyam Barnett in 1835, the labels plastered over Alexander’s name clearly visible.

On Sukkot, as we walk around the synagogue carrying and waving the lulav and etrogim in all their green and yellow, flailing majesty, many worshippers find themselves faced with an all too common, book-related issue. They struggle to hold their heavy Machzorim, balancing them precariously in one hand, armed with their arba minim in the other.

They will perhaps cast envious glances at those who have equipped themselves with those small Hebrew pamphlets containing the text of the Hoshannot for each day of Sukkot and, most importantly, the much longer Hoshannot for Hoshanna Rabbah.

Interestingly such small booklets are not a new phenomenon, as I can glean from some unique items in my collection.

It will not surprise regular readers of this blog to learn that the entrepreneurial printer Alexander spotted this business opportunity over 240 years ago. In 1780, he issued a small (12cm x8cm) 36-page booklet containing all the necessary Hoshannot, including those for Hoshanna Rabba. I am looking forward to using this pamphlet, over 200 years old, during the forthcoming Sukkot.

In 1807, Alexander’s son Levi then issued a new version of this Sukkot prayers booklet, complete with an English translation. This is a slightly larger octavo version of 72 pages, but it is still much easier to carry than a full Machzor. 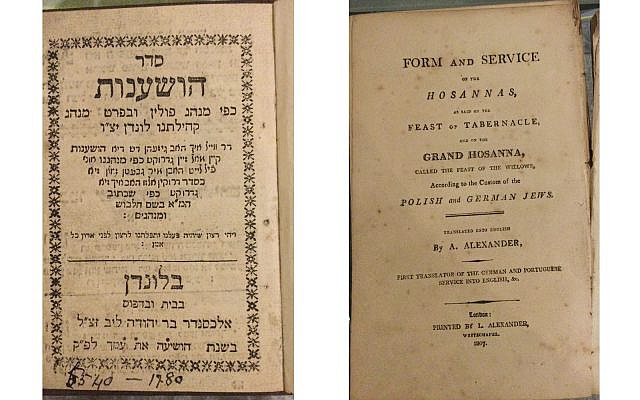 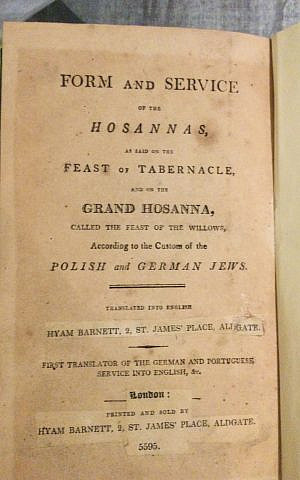 The same Hoshannot booklet template reprinted by a Hyam Barnett in 1835, the labels plastered over Alexander’s name clearly visible.

He did not even bother to print a new title page. Instead, he simply stuck two labels over parts of Alexander’s title page indicating himself as the printer and stating falsely that it was himself rather than Alexander who was responsible for the English translation!

These items offer a glimpse into the cut-throat world of Hebrew publishing in the 19th Century. It is worth reflecting on both for who have equipped themselves with a modern-day version of these rare Sukkot pamphlets, as well as both for those who have not.

For the Sukkot shul-goers, these small, light-weight Hoshannot booklets to hold seamlessly in one’s palm are a handy product, a lifesaver for those encircling the Bimah waving and praying, the equivalent of Apple’s airpods or contactless credit cards! And, like any good invention, in Jewish London of years past, they too became the object of business rivalry, competition, and knockoffs.