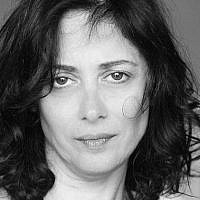 The Blogs
Lali Michaeli
Apply for a Blog
Please note that the posts on The Blogs are contributed by third parties. The opinions, facts and any media content in them are presented solely by the authors, and neither The Times of Israel nor its partners assume any responsibility for them. Please contact us in case of abuse. In case of abuse,
Report this post.

For all those infected months

we witnessed the withering of souls

when the precious body wraps its two banks

as if we were a Christo and Jeanne–Claude project

in the Middle East.

But she’s dead and he’s dead

and only a target is left of them

that turned into alienation

and blocking on social media

as if we were back again at the communication terms

of the year in which this earth was

renamed. The development of a new language out of life itself

in moments of envisioning the apocalypse

not the usual matter of things but

a condition of separating from the ground

that when fire whispers

the one who made you fall

is the only one who would help you rise up.

tr. from Hebrew by Maayan Eitan

About the Author
Lali Tsipi Michaeli is an Israeli poet. She immigrated from Georgia to Israel at the age of 7. She has published six poetry books so far. Attended international poetry festivals. She was part of a residecy program for talented writers in New York at 2018.
Related Topics
Related Posts
Comments