The Blogs
Samantha J. Greenberg
Apply for a Blog
Advertisement
Please note that the posts on The Blogs are contributed by third parties. The opinions, facts and any media content in them are presented solely by the authors, and neither The Times of Israel nor its partners assume any responsibility for them. Please contact us in case of abuse. In case of abuse,
Report this post.

On Wednesday, July 12th, the Senate Foreign Relations Committee held its first hearing on the Taylor Force Act. Republican and Democratic senators met to consider the bill that would cut American aid to the Palestinian Authority (PA) if it continued its program of making payment and granting rewards to individuals convicted of acts of terrorism and the families of terrorists killed during attacks on Israel. 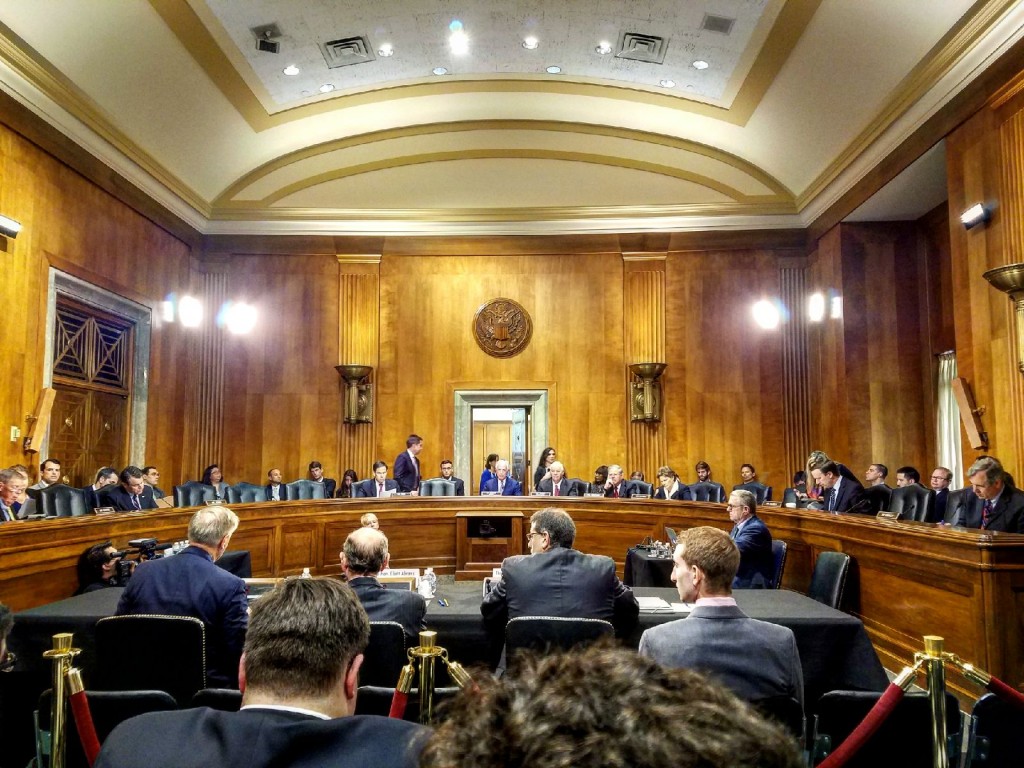 Senator Lindsey Graham (R-SC), who introduced the Taylor Force Act in February, was invited to give the opening remarks. Senator Graham recognized Taylor Force, a 29-year-old West Point graduate and US Army veteran who was stabbed to death by a Palestinian terrorist while on a school sponsored trip to Israel last year, as someone who “represents everything good about our country” and whose “death has to matter.” He thanked Stuart Force, the father of Taylor Force for attending the hearing and exclaimed how painful it must be for Taylor Force’s parents “to know that the taxes they pay go to a PA who rewards the killer of their son.” Graham insisted that the PA “stop paying their young people to become terrorists.” “This committee has the opportunity to send a signal to Mr. Abbas and everyone else that this position of the Palestinian Authority, Mr. Chairman and Ranking Member, is inconsistent with a two-state solution, inconsistent with peace and we need to stop our emboldening of this practice.” 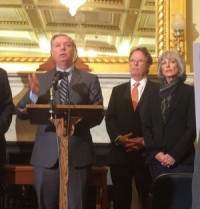 Chairman of the committee, Senator Bob Corker (R-TN), reaffirmed that the “Palestinian Authority-sponsored program that incentivizes terrorism” needs to stop but questioned the “all or nothing” approach in the bills first draft. “Understanding how we effectively eliminate financial support for the PA by tailoring our assistance is a little harder” Corker said, “I hope our witnesses can help us consider different options to ensure assistance that goes directly to the Palestinian people does not also benefit their government.”

Ranking member, Senator Ben Cardin (D-MD) said while he supports the premise of the act, “terrorists must not be rewarded for their acts, it’s incitement to violence” he questioned the unintended consequences of the act’s passage stressing the importance of US economic assistance to the Palestinians. Senator Cardin expressed disappointment that no administration official participated in the hearing to present the administration’s view.

Elliott Abrams, a former top US diplomatic official under President George Bush and senior fellow at the Council on Foreign Relations testified that the problem that led to the hearing “is the Palestinian practice of making payments to individuals convicted of acts of terror, and their families or survivors, in accordance with the severity of their acts and the length of their sentences. The predictable effect of this practice is to reward and incentivize acts of terror.” Abrams rejected the claim the the prisoner payments were welfare payments and opposed proposals to include a national security wavier, referring to it as an ‘escape route’ because it “achieves almost nothing. Congress would be handing the problem to the administration without actually having any impact on the Palestinian practice of paying terrorists for their acts.”

Abrams cautioned against a complete cut of Palestinian aid as it “might directly affect people or programs unrelated to the Palestinian Authority and its payments for terrorism” but urged to end all payments that give assistance to or directly benefit the PA itself. Such an approach would cut assistance roughly in half. If the PA doesn’t change its program after that, Abrams suggested revisiting the issue in three to nine months to cut more or to cut everything. Abrams also called attention to corruption in the PA, referring to a recent poll which showed 95.5% of Palestinians see the PA as corrupt and called for greater attention to “the whole issue of PA financial management and mismanagement.”

Abrams separated the issue of the $75 million in aid to cover Palestinian debts to suppliers of power and aid to hospitals. He recommended a continuation of aid to hospitals, specifically Augusta Victoria Hospital in Jerusalem but stopping payments for power bills as it “encourages a kind of corruption” as “commercial users of power in the West Bank simply don’t pay their power bills, because everyone knows the Americans will cover the bills.”

Abrams ended by warning the Chairman against the illusion that passage of the Taylor Force Act and a large cut in aid would immediately solve the problem but urged the Committee to pass the legislation nonetheless. “We need to send a clear message to the Palestinian people and leadership that we find the current system unacceptable and in fact repugnant. We need to be sure that our aid money does not even indirectly sustain that system. We should do this as a matter of principle — frankly, whether the Palestinians like it or not, and whether the Israelis like it or not,” Abrams remarked.

Dan Shapiro, former US Ambassador to Israel under the Obama administration, also supported the ultimate goals of the legislation of ending the Palestinians “abominable practice” of incentives to terror payments but urged the bill to be amended. Shapiro remarked that the goal must be to bring about a change in Palestinian political culture “without causing harmful unintended consequences to other US and Israeli interests” and in a way that promotes the goals of the Trump Administration which involve improved economic conditions for Palestinians in the West Bank.

Shapiro argued that previous aid reductions to the Palestinians have not achieved a change in PA policies and suggested the threat of aid cutoff might give the U.S. more leverage over an actual cutoff as the Palestinians are more concerned with their international reputation. Shapiro recommended the committee to consider the following measures;

Senator Marco Rubio (R-FL) asked if the provision in the 2016 Consolidated Appropriations Act that calls to reduce US funds by the Amount the PA and PLO pays prisoners is being enforced, which Shapiro responded it is being enforced. Senator Rubio questioned if accepting a change in the Palestinian program to an actual welfare system, would still be an incentive to terrorism. Abrams remarked a welfare system would be acceptable but if there is anything extra for involvement in terrorism it is incentives.

Senator Bob Menendez (D-NJ) stated “it is outrageous and unconscionable for a government in the 21st century to write into law incentives to hurt innocent people” and the Palestinian program must end. He referred to failed U.S. efforts to stop the program and asked the witnesses what they view as necessary to move the Palestinians away from the program. Shapiro suggested a multilateral “name and shame” approach which Abrams agreed to and suggested a deeper cut of funds.

Senator Todd Young (R-IN) questioned the prospects of success to persuade the the Palestinians to end their prisoner payment program through the UN. Shapiro suggested the most impactful step, although very difficult, would be to have the Security Council speak out on the issue. Abrams suggested to do more privately such as focusing on aid donors countries to speak to the Palestinians. Senator Young spoke on the importance of increasing congressional review and referred to legislation he introduced, National Diplomacy and Development Strategy Act of 2017 (S.1228), which would require the Secretary of State to submit a classified version of the U.S. strategy regarding ways and means.

Senator Jeanne Shaheen (D-NH) spoke on the need to galvanize the international community, specifically the Arab world, to pressure the Palestinian leadership. She requested the June letter signed by Israeli generals in opposition to the Act be included in the record and asked how to better work with Israel to address the issue.

Senator James Risch (R-ID) expressed disgust that US taxpayer dollars were funding Palestinian incitement, through prisoner payments and in their textbooks. He stated that in addition to cutting aid the U.S. must seek a cultural change from the Palestinians.

Senator Edward J. Markey (D-MA) expressed appreciation for Shapiro’s suggestion of transferring reductions in aid to other programs such as CMM grants or people to people programs. Abrams cautioned against such an approach, arguing that due to fungibility, putting money in box A to box B would neither be a penalty nor a change in policy for the Palestinians.

Senator Rand Paul (R-KY) described his continued efforts to stop US funds from going to questionable hands overseas and referred to legislation he introduced in 2014 which would have cut off aid to the PA unless the renounced all ties to terrorism. “Cut it all. Cut every last penny of it,” Paul advocated and warned that anything but a complete cut off would result in continued Palestinian behavior with no changes. “If you want to restart it, restart it when they change their behavior.” Senator Paul urged both the US Senate and the Israeli Knesset to pass meaningful legislation to end the Palestinian program.

Senator Tim Kaine (D-VA) expressed a desire to stop the Palestinian practice but not in a way that harms humanitarian assistance or sets back the Trump administration peace efforts. Senator Kaine suggested to set funds aside in escrow, which would best provide the US with leverage and end PA bad behavior without harming other goals the administration wants.

Senator Chris Murphy (D-CT) questioned cutting Palestinian aid as punishment to a policy the US objects to and questioned if US cuts would even make an impact on PA behavior as Israel provides the bulk of the funding. Senator Cardin responded to Senator Murphy that US cut of funds would have an impact as the US is the world leader in such issues.

Senator Cardin (D-MD) said he “hopes we can find a way to pass the Taylor Force Act” in a way that will “make the legislation more effective to reach our objective” by putting maximum pressure on the PA to achieve our goal.

Senator Corker (R-TN) expressed appreciation that the colleagues were coming up with lots of good ideas towards reaching a compromise and said the committee will be moving quickly with the legislation.