It’s not often that one of your “fans” and fellow pro-Zion activists has one of the most highly reviewed novels on everyone’s must-read list.

Meet Gary Morgenstein and his novel, A Mound Over Hell.

Morgenstein’s fifth novel is set in 2098, twenty-five years after America has been defeated by Islam. Led by Grandma, a new society has been established based on love, ethics, and honesty.

I recently spoke with Gary about his novel. “Baseball and science fiction are my two loves, and I’m also a political junkie and a history buff, so this novel was the perfect literary storm. The beauty of writing speculative fiction is that you build upon existing events and take them to that next terrifying, thought-proving level, like George Orwell’s 1984 or Ray Bradbury’s Fahrenheit 451, along with a healthy dose of Philip K. Dick. The greatness of science fiction is asking “What if?”. So in my dystopian baseball novel A Mound Over Hell, what if the current conflict with Islam went horribly south and we actually lost World War Three to an ISIS-clone? Then throw in the end of baseball forever. What would this look like but, most importantly, who are the people in this world? Even in the worst of times, people respond to basic needs and basic impulses. Humans don’t give up and I wanted to explore how they’d live and perhaps change these frightening circumstances.”

All acts of patriotism, from flying the flag to singing the National Anthem, are illegal. Social media has been banned. Religion is illegal. Children are now revered, and abortion and the use of contraceptives are capital offenses. Teachers, police, and doctors are the most trusted professions, while the entertainment industry, lawyers, and the banking industry are outlawed.

As A Mound Over Hell opens, baseball is beginning its final season—forever. The once all-American sport is now synonymous with terrorism and treason. Holograms run the bases for out-of-shape players and attendance averages fifteen spectators per game. The only ballpark left is Amazon, the once-famous Yankee Stadium. Led by Puppy Nedick and a band of former baseball greats, the game grows popular again, only to become a pawn between those who want peace, and those eager for another war.

“The power of speculative fiction is that it allows you to be timely while taking the reader through a window into a nightmarish future,” Morgenstein said. “Familiar, yet not. But as humanity has always done under the most terrible of circumstances, ordinary people will find the extraordinary courage to build a better world. Or at least try. For as Grandma says in her First Insight, ‘All you need is love.’ That and a baseball field.”

A Mound Over Hell is available in print and ebook at all major booksellers. 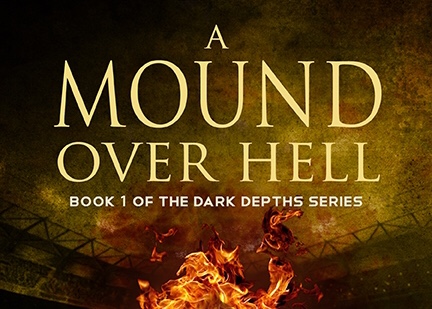 Gary Morgenstein’s previous books include Jesse’s Girl; Loving Rabbi Thalia Kleinman; Take Me Out to the Ballgame and The Man Who Wanted to Play Center Field for the New York Yankees. An accomplished playwright, Morgenstein wrote the book for the critically-acclaimed off-Broadway sci-fi rock musical The Anthem, as well as the sci-fi musical Mad Mel Saves the World. His stage dramas include A Tomato Can’t Grow in the Bronx, Right on Target, Ponzi Man and Saving Stan.