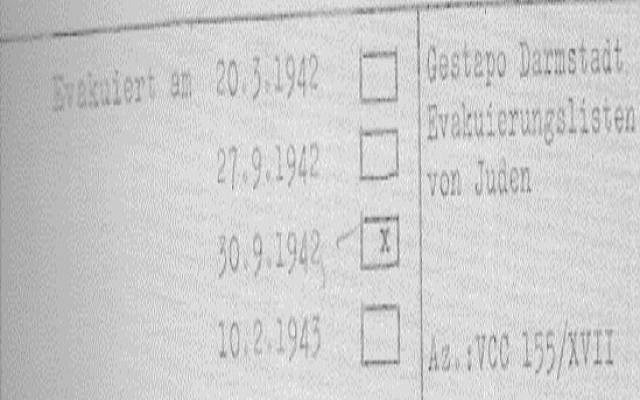 Transportation notice for my grandmother from Darmstadt to Treblinka, dated 30.9.42, the day before  Hoshana Raba.

Hoshanah Raba 1942: the day that  my grandparents’ transport arrived in Treblinka, where they  were almost certainly  gassed on arrival.  We grew up knowing that they were victims of the Shoah, but it was only after 74 years that we finally learnt when and where they were murdered.  I have begun a new ritual: on the eve of Hoshanah Raba, I read over the batch of letters that my father received from his parents, and which we, his four daughters, found after his death, locked in his safe . These letters were originally sent to England after his departure from Germany  during August 1939, and after my father was transported from England to  Australia on the infamous Dunera, the letters were posted from Germany to the internment camps in Australia.  The final letter was dated September 15, 1942, a few days before my grandparents were dispatched from their home in Offenbach to Darmstadt as a transit stop, before being deported to Treblinka in order to be murdered.  The train to Treblinka departed Darmstadt on the day before Hoshanah Raba, September 30, 1942.

Hoshanah Raba is the tipping point: until then we can still appeal the fate decreed on Yom Kippur.  After Hoshanah Raba the decisions are final. My grandparents were murdered on Hoshanah Raba.  On the very day that the gates of final appeal slammed shut, their fate became irrevocable and so, for me, Hoshanah Raba and my grandparents are now inextricably linked.

During the terrible years of the Holocaust and the Second World War, letter writing, especially between separated parents and children was fraught . Not only was there the  constant trepidation about each other’s fates, but there was also concern as to how best to avoid the double censorship of the missives that were being passed between two warring countries. This censorship could result in the entire communication being erased.  For example, in March 1941, my grandfather in Offenbach Germany, wrote to my father who was detained in Australia.

A few days ago, your first card from September 12, 1940, bearing only your signature, arrived. It made us very happy. I sent a similar card home 22 years ago”.  (Presumably referring to  a card he himself had sent home after being captured while fighting in the German army in WWI that  had been similarly censored. NB)

My grandfather, all those thousands of miles away in Germany was sensitive to his son’s feelings. He was comforting him and obliquely conveying to him that he, too, had written a card that had been totally obliterated by censorship.  In today’s world of instantaneous communication, it is hard to imagine the significance of a card, arriving three months after it was sent, a card which, after censorship, bore only a signature.  A signature signifying life, love and hope.

Ostensibly sunrises and sunsets are a safe topic, unlikely to be obliterated by censorship.  It makes sense therefore that another letter which also brought joy to my grandparents, included this uncensored paragraph from my father, then aged 19 commenting on the magnificence of an Australia sunset:

“I would like to also mention the natural phenomena, that left a great impression on me: sunrise, sunset. About 20 minutes before the sun rises, the color of the sky changes to a soft orange, then one can already see the rays of the sun and soon after a fiery red ball arises. It is generally very interesting to observe the sky”

“Now Spring begins. It is fine weather and in the nature, everything begins to blossom. In your last letter you have written about sunrise and sunset in Australia, that must be a wonderful view.”

Sunrises and sunsets are mesmerizing.   In some parts of the world they are particularly beautiful.  In Australia they were glorious and after they made a new home in Jerusalem, my parents continued to enjoy stupendous sunsets from the windows of their apartment in Jerusalem.  Every evening there was a magnificent display of colors which gradually faded as dusk fell. During the last seven years of her life, after the death of my father, my mother lived alone in the apartment  and she  never failed to celebrate each sunset.  She replaced the solid walls of the veranda with transparent material so she could continue to appreciate the sunsets despite using a wheelchair.

It seems to me that the description of sunrise and sunset during those terrible years were more than simply a “safe topic” that would pass the censors.  My father wrote about sunrises because he was an eternal optimist, always believing in the dawn and better days. This optimism was echoed in my grandmother’s final letter:

“You surely understand how big our yearning is to see you again. Please continue with your development, [G]od [w]illing, the dear G’d’s will help us and reunite us. We will depart from here in the coming days and our destination is uncertain.  As soon as it becomes possible, we will be in touch again. It is difficult for us to leave our home behind, but our strong will and our trust in G’d will not leave us“.

Generally, we tend to wake up after sunrise and so we tend to see a lot more sunsets then sunrises.  However, I don’t think that this is the only reason sunsets are somewhat more compelling.  It is during sunsets that the brilliant flashes of colors fade to dusk and darkness. Sunset marks the dying day.

Sunset on Yom Kippur marks the closing of the heavens.  This year I watched the sun set whilst sitting outside and praying for our hearts to open, for sanity to reign and for healing.

The rising and setting of the sun is a reminder of our insignificant role in the universe.  As it’s written in Kohelet which we read on Sukkot, ‘the sun rises and the sun sets.’ It will rise and set during times of war, times of peace and times of plague. The sun is indifferent to humanity’s reactions. Yet, there is a special meaning to the setting of the sun on Yom Kippur when our decrees are sealed at that moment.

But even then, as the optimist knows, after the sun has set on Yom Kippur there is still room for appeal.  That appeal can take place until Hoshanah Raba.  On that terrible Hoshanah Raba 78 years ago, and on all of the more than 2000   days of those horrific years, appeals were summarily rejected.

May Hoshanah Raba this year be different. This year may our appeal for a better year, a year of kindness and understanding, a year of healing and connection, be answered for the good. 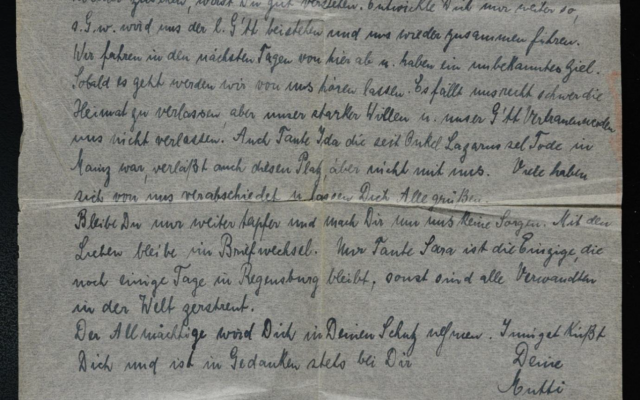 Final letter from my grandmother to my father dated September 15,1942.
About the Author
Nurit Bachrach made Aliya from Australia in 1985. She is a qualified lawyer who worked for 10 years as a public prosecutor in Israel, founded the Mosaica Center of Conflict Resolution by Agreement in 2003 and has been the executive director of Mosaica , Religion, Society and State since 2016. She lives with her family in Jerusalem.
Related Topics
Related Posts
Comments