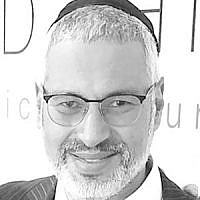 The Blogs
Zev Kahn
Apply for a Blog
Please note that the posts on The Blogs are contributed by third parties. The opinions, facts and any media content in them are presented solely by the authors, and neither The Times of Israel nor its partners assume any responsibility for them. Please contact us in case of abuse. In case of abuse,
Report this post. 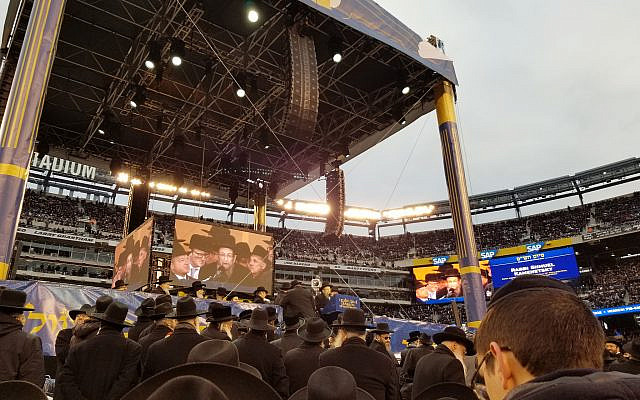 The highlight for me was standing with my son, Nachman, a few feet away from Rabbi Shmuel Kamenetzky, as he said the hadran, the prayer recited at the end of each mesechta (volume) and which has added meaning when completing all 2,711 pages of the Talmud. Not a person to show emotion openly, Rav Shmuel noticeably choked back the tears as he read the moving words “Hadran alach Talmud Bavli, Hadran alach, We will return to you, Talmud Bavli, We will return to you.”

I’m from South Africa, where rugby is a religion. I played all through school and was selected to play for a state team when I was at the University of Cape Town. As a wing on the Western Province under 20 state rugby team, I played a game once in Ellis Park, a stadium in front of 50,000 screaming fans. It was a thrill. At one point, I remember looking up at the enormous crowd and thinking “Wow!” That was nothing compared to the feeling I felt praying the mincha (afternoon service) on the field of MetLife stadium together with 90.000 fellow Jews. The total silence was surreal, as we all turned our collective hearts to the heavens.

I went to an all boys high school, called Grey. There was a rule at Grey. Every single boy had to play a team sport in the summer and the winter. Most boys played rugby. A rugby team has 15 players. So  if there were 60 boys in 8th grade, there were 4 rugby teams in 8th grade. Each team played against an opposing school each week. On game day, from morning  until late afternoon, almost the entire school played a game of rugby until the final game between the 1st team and the opposing team. Here in America, schools have one team and there is one game on game day. There are a few players on the team. Everyone else is a spectator.

Even in South Africa, at the game, half the crowd is screaming for one team, half for the other.

At the Siyum haShas, there were no spectators and only one team. Every single person, there, man, woman and child was a participant. It felt like 92,000 Jews were all on the one team. This wasn’t just a celebration for those who had toiled in learning for the last 7 1/2 years. It was a celebration of anyone who has learned any Torah the last 7 1/2 years or gave encouragement to someone else to learn. It wasn’t just a few thousand who were finishing Shas (the entire Talmud) that were ‘playing’ while everyone watched. On this day, everyone celebrated the centrality of Torah learning in our lives and its source of our strength and survival.

There were true survivors in the stadium, those who witnessed the horrors of the Holocaust, and who at MetLife saw the flourishing of a Jewish nation that was unimaginable 70 years ago. There were the young children, who learned mishnas (teachings of the Oral Law) and had their own celebration while their parents and others looked on at the bright future ahead of our People.

A few days later, the Chicago Jewish community held their own Siyum. As Rabbi Yaakov Robinson said in his opening remarks at the Chicago Siyum, “just like at a wedding,  you have the first main dance for everyone and the second round of dancing for family and close friends,” so too this celebration is a family celebration.

Earlier that morning, as I took my place at Rabbi Deutsch’s shiur (class) on the first daf (page) of Brachot, as I began my third cycle, the room was packed with people. Whether it was for one day, one mesechta (volume) or another 2,710 days, we all felt we were re-energized to increase our Torah learning.

As one commentator pointed out, the Siyum, as great as it was, was not just ‘One Day.’ Rather, it was Day One of our individual and collective future of Torah learning.

About the Author
Rabbi Zev Kahn is better known in the Chicagoland area as the "Rugby Rabbi" from his days as a former Maccabi Games Gold Medalist in 1985 and 1989. Originally from Port Elizabeth, South Africa, Zev played for University of Cape Town and Western Province under 20, before being selected to represent South Africa. Zev came to Chicago after spending six years at Ohr Somayach in Jerusalem, where he completed the Ohr Lagolah teacher training program and was very involved in college student touring programs. The Kahns moved to Chicago in 1998 to work for the Chicago Community Kollel, and in 2005 Rabbi Kahn founded JET - Jewish Education Team, an outreach organization that reaches about 1,000 college students and young professionals throughout Illinois. Rabbi Kahn and his wife, Hilary, a native of Los Angeles, have four children and live in West Rogers Park, Chicago.
Related Topics
Related Posts
Comments