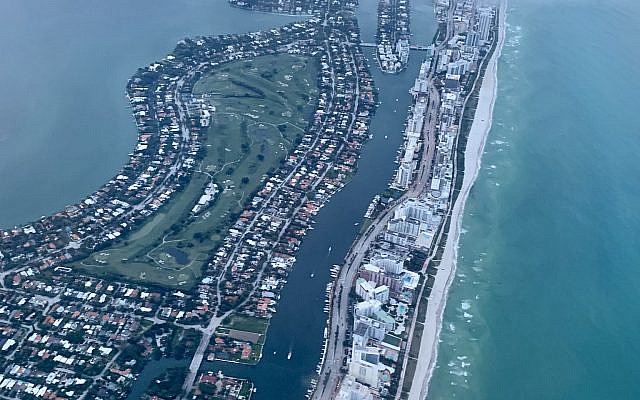 I didn’t think much of it when my dad told me a building had collapsed in Miami. He sounded kind of shocked, but I was too groggy to think about it before my first coffee.

Even when I saw the pictures, for some reason it didn’t register as a major event. It’s not like I was far away when I heard the news. I was in Florida at the time on a short visit to spend Father’s Day with Aba and jet back a few days later. Thursday morning – when the building at 8877 Collins Avenue came crashing down – was the day before I left.

And seeing that address is what snapped me out of my slumber.

The last address I had before moving to Israel was 7744 Collins Avenue, Miami Beach, Florida. My last apartment was literally down the street from Champlain Towers. I tried to access my scattered memory to see if I remembered the building, but I couldn’t recall what any buildings looked like other than my own.

I’m not actually from Surfside. I technically lived on the border in North Beach, which Surfside is either next to or part of, depending on who you ask. And I only lived there for a year. I’d never even heard of Surfside until I moved to the area in the summer of 2008.

What I do remember is the area was very, very Jewish. It’s one of the reasons I moved there.

After 7 years of living in a fairly boring suburb near my hometown of Coral Springs – a very boring suburb – I was ready for something more. What more was, I had no idea. I just knew I wanted more action than Plantation, FL could provide.

I was 30 years old. Birthdays ending in 0 will mess with your head. You’ll rarely feel happy about them unless you’ve already got everything you ever wanted in life. If relationships and vocation are the two pillars of happiness, I’d felt like I hadn’t even laid the foundation let alone thought about the pillars.

But it wasn’t all bad. I had put out an album a year before that was having some success. And though I’d been playing gigs all over town for the last two years, those gigs were now in South Beach, right next to North Beach.

I decided it was time to make the move after I snagged a weekly gig at Jazid right on Washington Avenue. I got lucky and found a 2-story loft in an almost brand-new building right on the beach – with a pool on the roof (!).

Even though it was half the size of my current apartment, it was exactly the same price. I didn’t care how much crap I had to squeeze in there – I was going to live on the beach.

It wasn’t just the apartment, cool as it was, or its location across from the sand, amazing as that was. It was the whole lifestyle.

It felt like for the first time in my life I was living in a city. A real city where you walked to the grocery store and strolled to CVS. A city where you could pop down at any time and eat whatever your heart desired from pizza to paella, sushi or shwarma, all the while sitting on the sands of the Atlantic.

And it was filled with Orthodox Jews who did a lot of the walking, especially on Shabbat. It seemed like there were more synagogues within walking distance then I had been to in my whole life. There was no shortage of kosher restaurants. Conversations in Hebrew.

I was moving to a real city. On the beach, next to South Beach and Surfside.

A beach city filled with Jews – my kind of paradise.

At that point the idea of moving to Israel hadn’t entered my head. That was something planned for later in life after I’d retired.

At this point the idea was to get out of the ‘burbs and into the city so life could finally begin in my naive sense of living.

Walking out of my apartment, all you had to do was cross a two-lane street and you were on sand. Take a right and you’re walking into South Beach. Make a left and you’re in Surfside.

I was convinced this Jewish paradise was the golden ticket to life’s jackpot. I quickly took advantage of my surroundings, waking up at 6 a.m. to either jog on the beach or sit with my guitar on the sand writing songs about sunrise.

That lasted a week, maybe two.

I quickly fell back into the same patterns of life that had caused it to feel lifeless in the first place — sleeping way too late, vegging on the couch, waiting for life to give me its promised rewards at a steep discount that never existed.

In the end I discovered paradise, but it wasn’t what I needed. For starters, it was too comfortable for a guy in his 30s. It was the kind of place you go to during your third act of life, when you’ve already done all the big stuff and are ready for some chill stuff.

I needed a place that would make me feel like jumping out of bed to catch the sun before it rises. Here I felt getting out of bed was a choice, not a requirement, if at all. Some days turned into nights before I ever had a chance to know them.

The other problem in my quest for action on my doorstep? It was a solo adventure. The closest friend near me was a 40-minute drive away.

I grew to love my surroundings and hate how much I loved them. I didn’t want to do anything. Everything seemed too far and not worth leaving my little Jewish paradise.

I was still playing the gig at Jazid along with some others. But the album cycle had run its course. If I wanted to stay in the race, I had to start all over again. I had no energy for that.

That’s when I decided to move up to a bigger Jewish paradise.

The idea of moving to Israel — Tel Aviv at that — seemed like a perfect way to export everything I loved about the Surfside area while adding the hustle and bustle I needed to thrive.

I haven’t thought much about Surfside since I left in 2009. Now I can’t stop thinking about it. Reading about it. Wondering how long the immediate, interminable suffering is going to last for the victims’ families. The not knowing yet knowing more with every passing hour. The praying for a miracle of any kind: Jewish, man-made – whatever you got.

When I left Florida on Friday, I felt the familiar pushing and pulling at life’s many heartstrings, a feeling that strikes most heavily during its heights and trenches, especially moments involving Israel and the Diaspora and the story of the Jews that is always being written.

Moments like the IDF sending its famed search and rescue team, the best in the world, as even Florida government officials are proud to acknowledge.

Moments like Israeli officials meeting with Miami officials, acknowledging the tremendous comfort this provides its local Jewish community (and Jews around the world).

I’m very thankful that @DrNachmanShai, Israel’s Minister of Diaspora Affairs, stopped by today to offer his support — we know how much this means to our entire Jewish community affected by this tragedy. pic.twitter.com/9YSDzOmupF

In a mad world getting madder by the minute, these moments of solidarity warm the hearts of every Jew who divides their heart in two.

These giant moments in time become the checkpoints of life. The places your mind goes to when it wants to take inventory or escape from the present or a little of both.

Surfside now holds two of those markers for me. The first was a life-changing year that led me to change my life path.

The second is a life-changing event for my South Florida community, especially the Jewish part, as it was after Parkland when five Jews were among its victims. As I said then when trying to give voice to the feeling of yin and yang that every immigrant feels:

Home is a fluid concept when you move halfway across the world, but home is where my heart is, bleeding with the rest of them.

About the Author
Yoni Leviatan is a British-born, American-raised, Israeli-blooded musician, content producer, marketer, presenter and part-time political commentator who loves to think out loud. Especially about Israel. Originally from Coral Springs, Florida, Yoni has been living in Tel Aviv since 2009, returning to the land of his parents and grandparents and ancestors before them. Click to watch his videos. Click to hear his music.
Related Topics
Related Posts
Comments
Advertisement