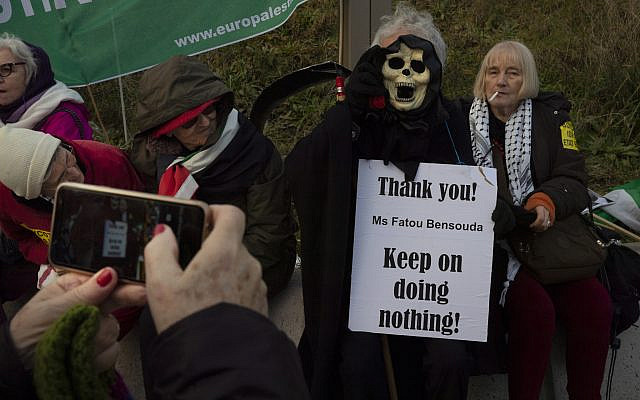 A woman takes a picture of the Grim Reaper holding a sign referring to Chief Prosecutor Fatou Bensouda during a demonstration outside the International Criminal Court, ICC, urging the court to prosecute Israel's army for war crimes in The Hague, Netherlands, November 29, 2019. (AP/Peter Dejong)

Israeli reactions to the International Criminal Court’s decision to proceed with the investigation of possible Israelis war crimes against the Palestinians have ranged from genuine astonishment to complete outrage, as if the ICC’s ruling came out of the blue. It did not: anyone with even a cursory knowledge of the issues at hand could have hardly been taken by surprise. This decision has been in the making for quite some time. Israel has done very little, if anything, to deflect it or to avoid its ramifications.

What, then, can explain the almost wall-to-wall consensus around the Netanyahu-led barrage against the ICC and the personal attacks on its outgoing prosecutor-general, Fatou Bensouda? Building on a prevailing disinterest, it has become acceptable — and politically worthwhile — to blame outside instigators or to buy into conspiracy theories rather than to take responsibility for one’s actions. For far too long, Israel has adopted a strategy of lashing out rather than looking inward. By persisting in averting accountability for its own actions, it has — by default — left this heady task to others. This is not just a tactical question. It has widespread implications for Israel’s moral compass and for its normative guidelines. And it is rectifiable.

Israel’s relationship with the ICC has always been dodgy. In the wake of the Holocaust, Israel was among the leading countries advocating for the creation of an international tribunal that would adjudicate war criminals and monitor the implementation of universal humanitarian conventions in situations of armed conflict. When the drafting of the Rome Treaty was finally concluded in 2000, it was one of its first signatories. But it never ratified the treaty because it has consistently opposed the clause defining settlement by occupiers in areas acquired by force as war crimes. Israel, therefore, is not a member of the ICC and cannot initiate proceedings within its framework.

For years, successive governments saw no reason to cooperate with the Court. The legal basis for this position, grounded in the working guidelines of the ICC, has always been that outside intervention is unwarranted as Israel — like many other countries — has its own judicial mechanisms to oversee any violations of international humanitarian law and conventions. With few exceptions, however, this supervision has been limited to bringing a small number of individual soldiers to justice, rather than to constantly reassessing policies, directives and the manner of their implementation.

These legal arguments have been supplemented by substantive ones that overwhelmingly deny the veracity of charges against Israel. Indeed, Prime Minister Netanyahu has excelled in delegitimizing human rights organizations such as B’Tselem, Yesh Din, Breaking the Silence, and Adalah, which have dared to suggest that Israeli actions require closer scrutiny or, for that matter, that Jewish settlements beyond the Green Line are antithetical to international law.

This situation changed when the General Assembly of the United Nations recognized the state of Palestine in 2016 and it was accepted as a member of the ICC, immediately initiating charges against Israel. The Likud government refused to meet with ICC representatives and, with the help of Donald Trump, waged an outright campaign against the International Criminal Court and its spotty record. Its claim to being surprised at its decision to investigate Israel — or to uphold the Palestinian standing to promote such a move — is disingenuous at best.

Disagreements over the jurisdiction of the Court notwithstanding, Israel’s response to the latest developments has been not only sanctimonious, but also profoundly self-defeating. A closer look at Netanyahu’s statements in this regard accentuates this dualistic outcome.

First, Prime Minister Netanyahu declared that the Court’s ruling is “pure anti-Semitism,” thus not only conflating disagreement with Israeli policies and actions with ingrained hatred of Jews, but also, tellingly, ignoring the fact that the prosecutor-general was also charged with looking into war crimes conducted by the Hamas against innocent Israeli civilians.

Second, in a similar vein, Mr. Netanyahu has attempted to undermine the credibility of the Court, charging that it is going against its own brief to prevent atrocities like those perpetrated by the Nazis by probing the conduct of “the one state of the Jewish people,” as if “when Jews live in our own homeland it is a war crime.” Using this argument to avert scrutiny of Israeli activities in the occupied territories not only bypasses the substantive issues at hand, but also opens the door for questioning the very existence of the State of Israel — and not just its activities.

Third, Netanyahu then proceeded on these grounds to slam the ICC for intimating that “when democratic Israel defends itself against murderous terrorists…this is also a war crime”. But the question at hand is not Israel’s right to protect itself, but rather how it has chosen to do. The failure to make this critical distinction exhibits a disregard for precisely those humanitarian principles that enabled the establishment of Israel in the first instance. In the process, it also, paradoxically, raises questions about the depth of Israel democratic ethos and the legitimacy of combatting terrorism against civilians in general. Ironically, it actually highlights the difference between defensive necessities and overt initiatives related to Jewish settlements, increasingly extensive Israeli control of Palestinian lives and lands, and the curtailment of their most basic human rights. These, by all accounts, are not defensive acts, but proactive activities pursued by successive governments — now to the point of institutionalization.

Fourth, almost inevitably, reference is made to that double standard which targets Israel, but circumvents any effort to call Syria or Iran to account. Even if Israel has traditionally been singled out by international bodies, this does not mean that its actions are not subject to review. As in the past, recourse to this rhetoric may have a mitigating effect; of its own, it grants no absolution.

Finally, looking directly at the camera and clenching his fist, Benjamin Netanyahu concludes with a promise. “We will fight this perversion with all our might.” The militaristic analogy employed to combat accusations of war crimes may sound reassuring to certain groups in Israel. In the ears of others, its combative tone and message may have precisely the opposite effect, reinforcing an image of a militaristic Israel trampling on the rights of others with impunity.

The picture that emerges from the official response emanating from the very top is one of a defiant Israel which is always right and forever threatened. Israel may have succeeded in gaining a certain amount of (mostly ephemeral) support in neo-authoritarian countries (Hungary, Poland, the Philippines, Brazil) and ultra-nationalist circles abroad, but this backing is fading externally. Its intransigence contributes to the country’s isolation in the international community. Such a confrontational attitude is patently damaging to the country.

This combative approach also has internal implications. Beyond its possible immediate electoral value domestically, it raises serious thoughts about the content of Israel’s guiding values today. Notably absent is any self-reflection, any capacity to take responsibility for one’s actions, any clear criteria for distinguishing between what is right and what is wrong and any attempt to establish mechanisms to enforce these principles. The most important reckoning is the one that it has skirted: to itself and to future generations. It can no longer continue to fool itself systematically.

It is not too difficult to change course. Israel has 30 days to reassure the International Criminal Court that it intends to institute strong measures to police itself by establishing an independent commission to monitor violations on the policy and operational levels. Putting in place such mechanisms can achieve two major goals: first, it can demonstrate to the outside world that it takes its international obligations and commitments seriously (thus increasing its own credibility and maneuverability when facing serious threats); and second, it can thereby set in motion the lengthy — and painful — process of self-examination and subsequent correction.

Above all else, however, the best way for Israel to safeguard itself from constant external calumny is to desist from policies that contravene basic humanitarian values. This applies not only to specific actions in times of violent confrontation, but also, significantly, to ending the occupation, which denies the Palestinians the fundamental freedoms upon which Israel was constructed.