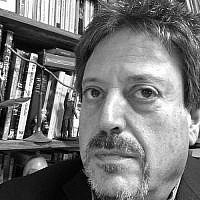 The Blogs
Jeff Spitzer
Apply for a Blog
Please note that the posts on The Blogs are contributed by third parties. The opinions, facts and any media content in them are presented solely by the authors, and neither The Times of Israel nor its partners assume any responsibility for them. Please contact us in case of abuse. In case of abuse,
Report this post.

Here we are in the early 21’st century (CE) and surprisingly the Latin language is still alive and kicking.

More importantly the concepts described in Latin phrases are classic and relevant today.

Let’s look at two such phrases that have come up recently and have implications on US, Israel and International relations. Once we begin to examine these phrases and the context in which they have been used, their significance and implications are nothing short of amazing.

Among the many tweets, clips and reports relating to the US impeachment process, you cannot have missed the endless references to and denials of, “Quid Pro Quo,’

If one agrees with the Democrats on Capital Hill, one would think that the alleged guilt of President Trump and with it his US presidency, depends on the validity, veracity and accuracy of this term, ‘Quid Pro Quo.’ This is demonstrated in the repeated defense, “No Quid Pro Quo,” or vice versa.

There it is, another Latin term, ‘vice versa,’ meaning, or, ‘the opposite.

For most partisans that is enough to prove their case for impeachment and removal of the president. However, what is Quid Pro Quo beyond its literal meaning in the context of impeachment? The answer is that it is, or could be, an element of ‘the crime.’  To have a theft you must have a taking of something. Some item. Some property.

If there is corruption in another country can the US President condition US assistance or even a White House meeting on that country, that leader, complying with the president’s request?

Has this been done by other presidents? Is it within their power or discretion?

Those questions I will leave for others to grapple with for now.

We can use the previous instance as a gateway to our next matter which also has important implications and effects on International Relations, US politics and relations between the US, Israel, the PA, and the wider Arab and Muslim worlds.

The quandary about Quid Pro Quo is one that may decide the  future of the US` president and US domestic politics not to mention how it will effect Wall Street and the world economy.

What I pointed out also was that even if there was the alleged Quid Pro Quo, was it ‘Per Se,’ a crime, criminal, or proof of “high crimes and misdemeanors?”

In other words, Per Se’ means intrinsically or automatically so.

Even if there was a Quid Pro Quo, it might not be, ‘Per Se,’ automatically, intrinsically criminal.

Where has this come up recently? It was almost unnoticed. Now that’s a question in and of itself. Was it, the use I am about to discuss, missed accidentally, inadvertently or deliberately? (I’m leaning on accidental and inadvertent although that too should be examined for the deliberate motivations that exist.)

So, where did it come up? US Secretary of State just announced that the US does not, no longer, sees the Israeli Settlements on the ‘West Bank,’ the “occupied” territories as “Per Se,’ Illegal.”

The world media, news and social immediately announced that the US had reversed previous policy and ‘declared Israeli settlements, legal.’  This of course resulted in some of the predictable reactions. Settlers wished to celebrate the recognition and perhaps, legalization of their settlements and the Palestinians condemned the very same thing.

Did they all miss that  US Secretary of State Pompeo, said that the US does not view those settlements as “Per Se’ illegal.”

The latter opens up a discussion as to what are to be legal and recognized settlements and which not? This might lead to a breakthrough allowing the parties to discuss, even negotiate settlements, territories, sovereignty and borders.

As an aside I wonder if people choose to hear whatever they want or expect to hear or do they just ‘skip’ the words or phrase they can’t identify?

There is an interesting contrast between the two critical uses of Latin that discussed. Regarding Quid Pro Quo everyone ‘hears’ the term. Some believe if there is Quid Pro Quo then the president is guilty and should be impeached, convicted and removed. Others, ‘hear’ it and say, “no Quid Pro Quo, while still others say, “get over it.”

However, in the context of the US policy as articulated by US Secretary of State Mike Pompeo, is it surprising that most do not ‘hear it,’ at all?  Most do not hear the words, ‘Per Se,’ rather that the US has recognized the legality of Israeli settlements. Others do not hear it or ignore it to perfect their condemnation of it.  Each for their own political ends choose to praise or condemn the policy without the  Latin words, Per se.’

We cannot escape the reality of politics, law, conflict or the reality that little Latin phrases still matter quite a bit.

About the Author
An American born, Israeli, trained, licensed and practiced Trial Lawyer in NYC and Israel. Made Aliya 25 years ago after being an Ass't District Attorney and private Criminal Defense lawyer. Then Justice Ministry in Israel Criminal Law and Legislation and Knesset Commitee participation. Worked in the legal department of the Jerusalem Municipality for AG Eliakim Rubenstein and (PM) Olmert.
Related Topics
Related Posts
Comments