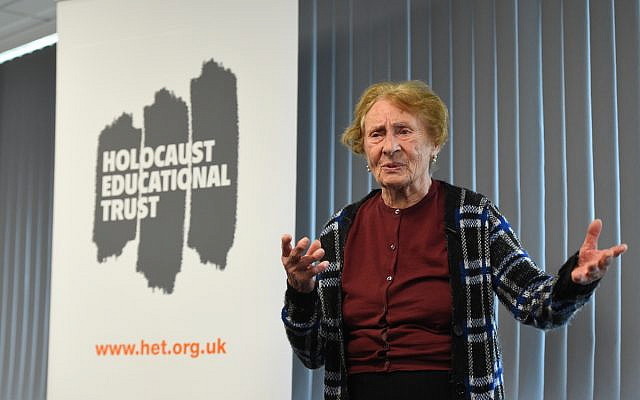 In early 1945 Susan Pollack was sent on one of the so-called ‘death marches’, forced across towns, villages, fields, all on an empty stomach, with barely any water, constantly aware that if she stumbled she would be shot. She was 15.

She had been a prisoner of the Nazis since 1944 and had survived the Vac ghetto in Hungary and somehow managed to survive the notorious death camp, Auschwitz-Birkenau. She had been separated from her family on arrival at Auschwitz and didn’t know what had happened to them, although she had of course heard the rumours.

Susan ended up in Bergen-Belsen. Not long after her arrival, British soldiers liberated the camp, saving her life. They arrived just in time for her but too late for 50,000 others.

Susan remembers being picked up from the ground by one of the soldiers and placed on a stretcher. Even today, 75 years later, she recalls the young man picking her up ‘like a frail bird’. The kindness he showed her after the brutal and dehumanising years under the Nazis is still one of the defining moments in her story.

Closely behind the soldiers came the nurses, whose job it was to nurse the half-dead back to life; the administrators whose job it was to work out how to look after the tens of thousands of liberated prisoners who had lost everything and didn’t know where to go; the Chaplains, whose job it was to offer spiritual support to both the survivors and the liberators, forever scarred by what they had seen; the cooks;  the drivers; the journalists.

Richard Dimbleby spoke from the camp, in a report made infamous over the last 75 years. He said that his words ‘can convey little or nothing in themselves. I wish with all my heart that everyone fighting in this war…could have come with me through the barbed wire fence that leads to the inner compound of the camp’.  He knew that the horrors he was witnessing could never be fully understood by people who hadn’t seen for themselves.

Thousands of British men and women were part of the unprecedented work of restoring life. They witnessed the unimaginable, many of them never speaking of it again.

Susan, and thousands like her, recovered, in part thanks to the bravery and kindness of the British people she encountered behind the gates of hell. Now in her retirement, she continues to share her testimony, week in, week out and today, tens of thousands will tune as she tells her story, interviewed by Tracy-Ann Oberman, on a livestreamed webcast broadcast into classrooms the length and breadth of the country.

Susan’s story is our story – we live in a country marked forever by the Holocaust, in communities where those who witnessed it lived. We are part of their legacy, we are the children, grandchildren, and great grandchildren of those who fought, nursed, liberated, survived. We have heard their stories.  75 years on it is our job to make sure that they are remembered and shared.