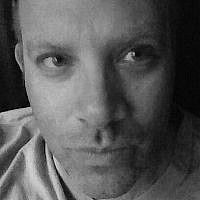 It is a curiosity why Baalbek’s legendary “Hotel Palmyra” is so named. It is in Lebanon not Syria. It is also in the verdant Bekka Valley, now a Hezbollah stronghold, hundreds of kilometres from the semi-arid desert steppe that surrounds the Palmyrene oasis.

My room had hosted the famous French actress Sarah Bernhardt [1844-1923]. It also had the best view of the ruins of the Temple of Jupiter-Heliopolis across the road. The following day I was caught in an electrical storm in and amongst the temple ruins. “Jupiter, god of sky and thunder,” I said to myself. Could it get any better?

Sadly not. In 2006 Baalbek found itself at the centre of the Israeli-Lebanon war. The town was pivotal for Hezbollah. It suffered accordingly. A barrage of mortar fire rained down in a war that was at best inconclusive and at worst, nothing more than bravado.

Today it is Palmyra’s turn to face the bullet. It too is caught in conflict albeit with the Assad regime, Hezbollah’s bedfellow, and rebel opposition forces. It remains highly strategic. Quite simply Palmyra is “smack-bang” in the middle of Syria. It is at the epicentre and radiates out towards Damascus, Homs, Raqqa, Deir El-Zur and the Iraqi border post of Abu Kamal. All around Palmyra are natural borders. In the North, the West and the South-East are dry barren mountains. To the East and the South are dry flatlands which merge with the Hauran. Palmyra is in the middle of nowhere and yet everywhere. 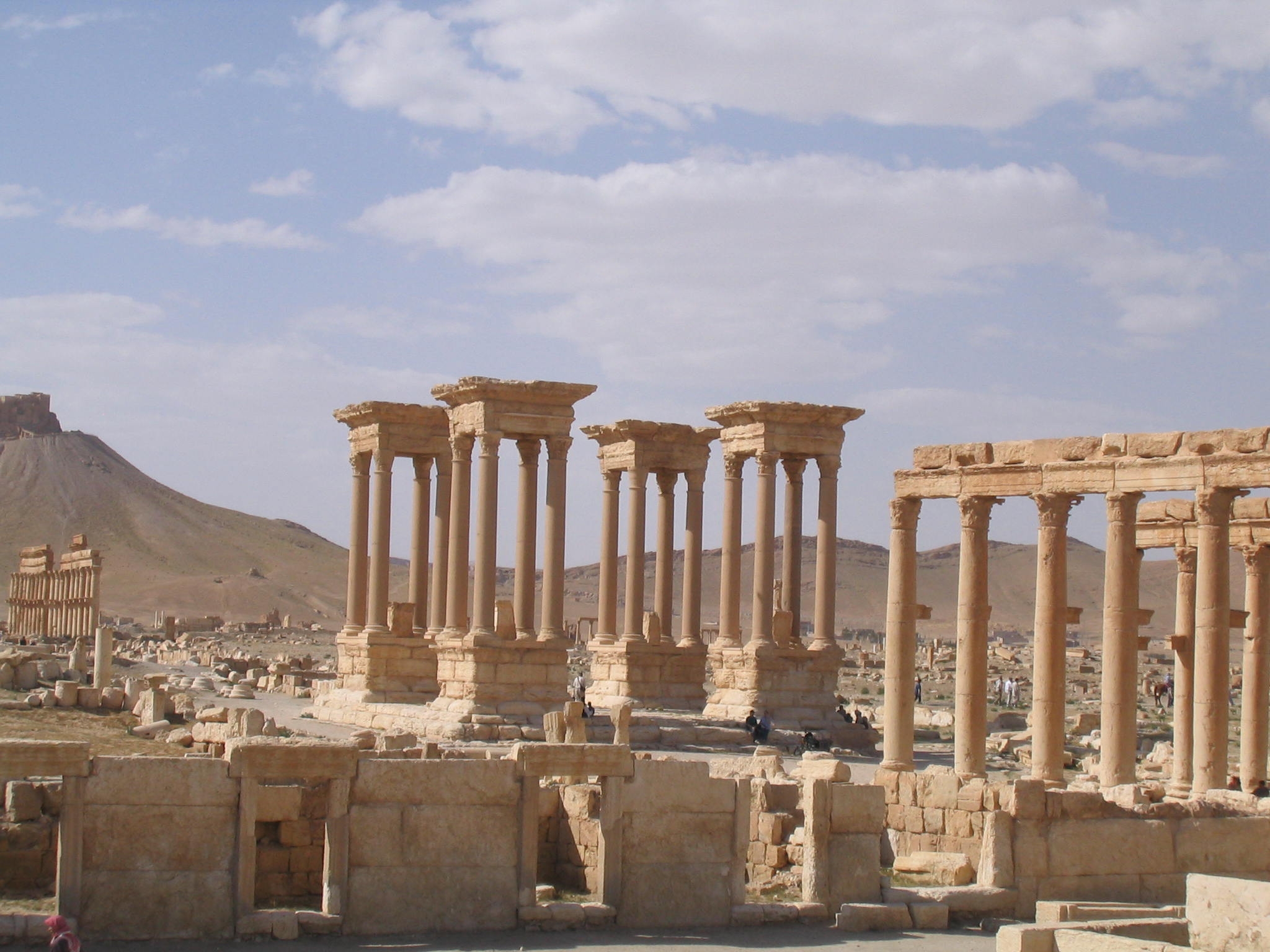 To the tourist, Palmyra is known for its archaeological and artistic beauty. For the dissident it is known for a darker, uglier past. Tadmor, the Arabic name for this oasis town, was also home to the notorious Tadmor prison. It was the scene of extensive human rights abuses, torture and summary executions in the wake of the 1982 Muslim Brotherhood Uprising. It was also the scene of the 1980 prison massacre which stemmed from a failed assassination attempt on Hafez Al-Assad. In 2011 the prison re-opened to detain anti-government protestors. Somehow, whether it is Hafez or his son Bashar, history always seems to repeat itself.

Palmyra remains an artistic marvel. It was one of the top tourist-destinations prior to the civil war. Its artistic heritage derives from its unique role as a buffer city which it first held in the 2nd Century between Rome in the West and Parthia (Iran) in the East. Palmyra responded to a state of “betwixt and between” and became one of the most prosperous of all caravan cities. As merchants of antiquity crisscrossed the desert, wealth flowed through the sands of Palmyra. Affluence found expression in a distinct yet hybrid art. It borrowed from Greek, Roman, Semitic and Iranian traditions while at the same time it offered its own local contribution.

This artistic endeavour finds its voice in the rich funerary art which can now be seen in the great museums of the world. In the town itself soaring burial towers, colonnades and temples dominate the landscape. The Temple of Bel is the most monumental of all of the temple-complexes in Palmyra. As with Baalbek, the Temple of Bel has retained the name of an earlier Semitic cult. It was associated with the Mesopotamian Baal, chief god of the pantheon. And as with Baabek’s Temple of Jupiter, the Temple of Bel also sits on the site of a much older Semitic temple. 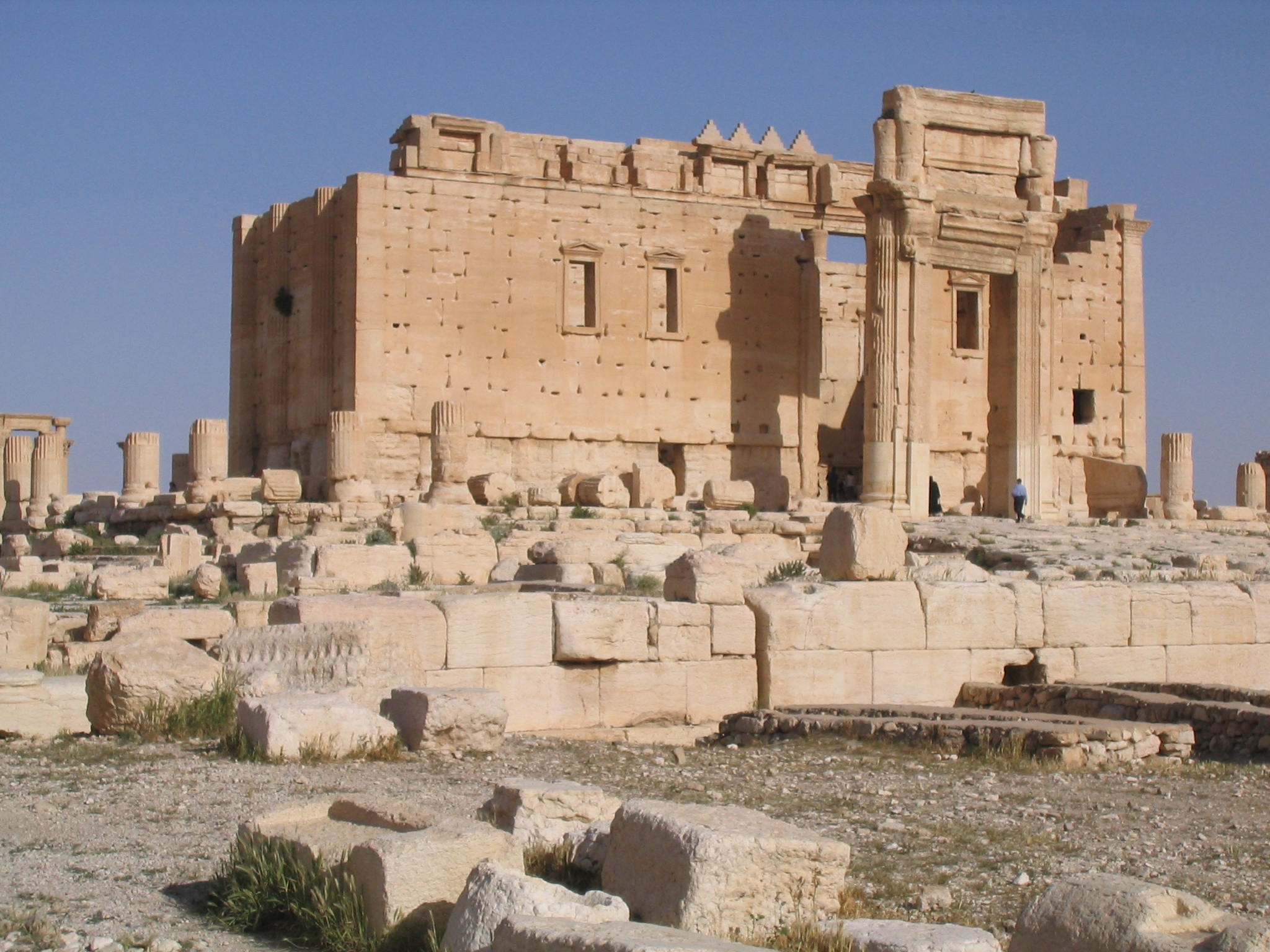 The Temple of Bel was dedicated in 32 CE as illustrated in the dedicatory inscription from the cella, or inner sanctum of the temple. Outside of the cella, in the near square courtyard, is the ruined banqueting house. Several hundred tokens (or tesserae) with Aramaic and Greek inscriptions have since come to light. These are believed to be “invitations” to the banquet which archaeologists believe could seat over 100 guests.

If Baal and the storm gods are forgotten, Zenobia [240-275 CE ], Palmyra’s most famous resident, lives on. In is perhaps in the history of insurgence and independence from Rome that Palmyra’s most memorable events are inscribed for eternity.

Zenobia’s husband, Odenathus, had already dealt a blow to the East with the defeat of Shapur the First [226-240 CE ], the Sassanian (Iranian) emperor. When her husband was murdered in 268 CE, Zenobia took up the mantle of an independent Palmyrene city-state. The woman whom Chaucer claimed in his “Monk’s Tale” , “would kill lions and leopards and tear bears to pieces”, declared herself regent. She locked swords with Rome. She seized the Roman province of Syria. She attacked Bosra, capital of the Roman province of Arabia and then set her sights on Egypt. Zenobia’s ambitions came to an end when the emperor Aurelian stopped her in her tracks and brought her to Rome in 271 CE as a captive. 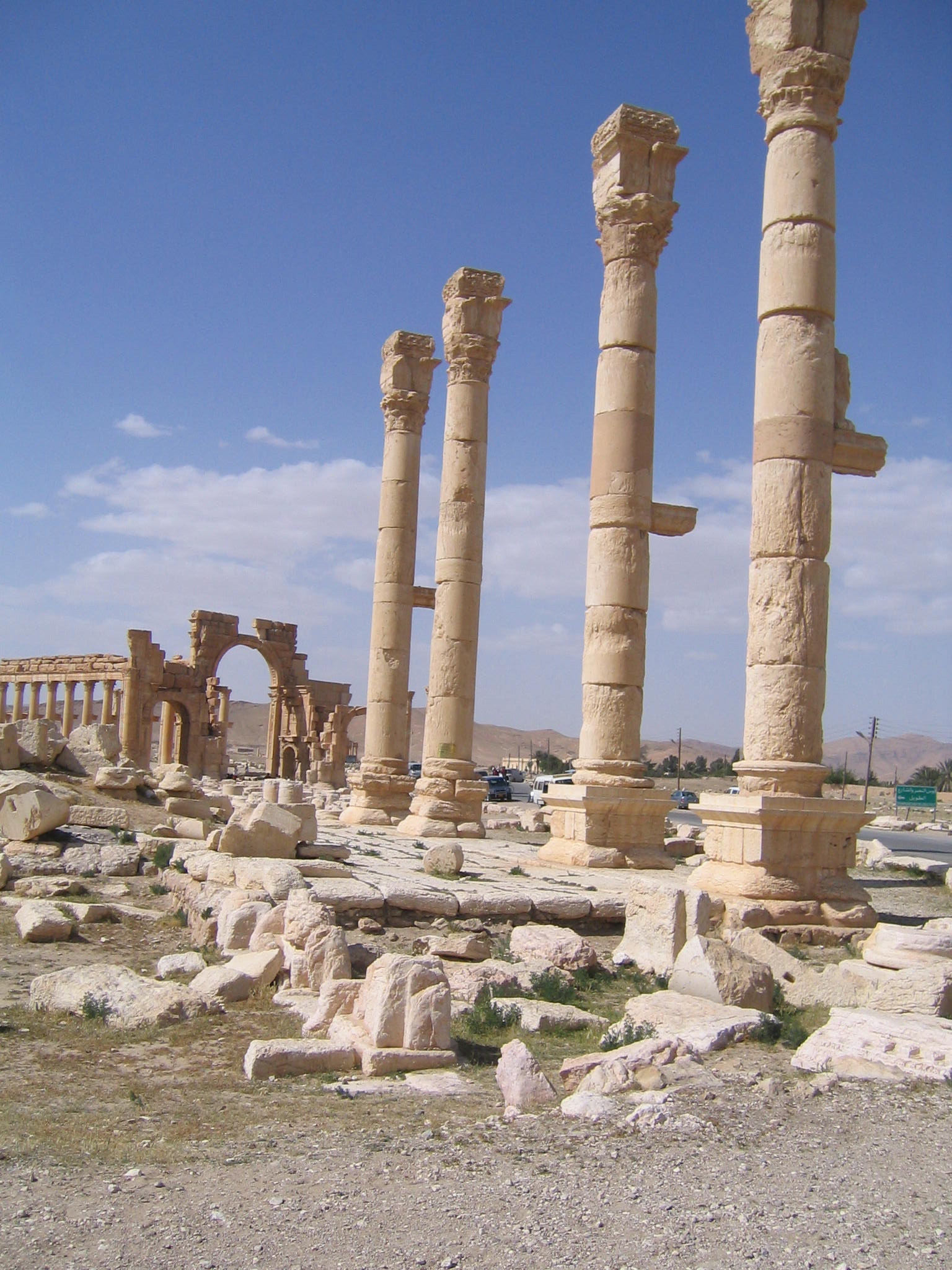 Under Islamic control, from the 7th Century, Palmyra would be refortified and around 1132 under the governorship of Abdul Hassan Yusef ibn Fairuz, a citadel (Qalat Maan) would be built on the mountainous vantage point.

Today the citadel has been extensively modified by the regime. I barely recognise it. It is a military installation with built and pre-fabricated structures that adorn the neighbouring elevation. Satellite antennae towers scar the landscape and additional roads plough through once quiet terrain. The colonnade shows signs of chipping by shrapnel – possible target practice. And the Temple of Bel is stained with mortar fire. Professor Abdulkarim of The Directorate General of Antiquities and Monuments has likened the damage to that caused by fire. He has stressed that it is light. But with footage of tanks progressing through the colonnade and reports of rebels hiding in the desert only to descend on government positions at night, Palmyra’s future remains uncertain.

For now all roads lead to nowhere as a stale-mate ensues and rose-coloured Palmyra watches on helpless.

—
Adam Blitz, a Fellow at the Royal Anthropological Institute in London, is producing a report on the impact of the Syrian conflict on Jewish sites to supplement Emma Cunliffe’s report for the Global Heritage Fund, “Damage to the Soul: Syria’ s Heritage in Conflict”