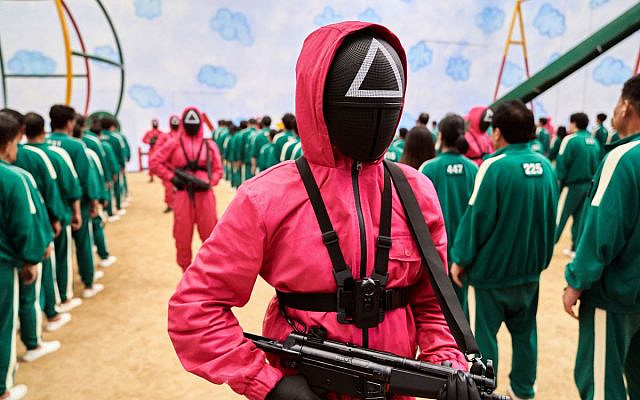 I have a discriminating taste when it comes to television, so I was not immediately drawn to the immensely popular South Korean series that has been streaming on Netflix, Squid Game. Although I was reasonably sure that the show was not a drama centering around a Korean fishing village, I found myself ignoring the fact that reference to the program virtually jumped out of the culture and arts section of just about every news site. A friend whose taste in television programming I’ve come to respect strongly urged me to watch the show. From what he said in concert with the reviews and discussions I checked out, the series did indeed sound like something worth watching. I was not wrong.

The show focuses on a dystopian situation in which a group of wealthy elitists come up with an idea to bring some excitement to their privileged but boring, uneventful lives. They recruit some four hundred financially desperate individuals to participate in a series of familiar childhood games, with the winner receiving approximately 40 million US dollars. The fat cats, not surprisingly, wagered on who would take the pot.

Although many of the games are those that are played by Korean children, several – Red Light/Green Light, Tug of War, Marbles – will be recognized by Western viewers as well. The winner is the last one standing; that is, he or she has made it through all the games successfully. Those who fail to prevail in any of the games are eliminated on the spot, not only from the competition but from existence as well…literally. All but one of the competitors will wind up with a bullet in the head, knife in the belly, or a fatal fall from a raised ledge.

I don’t understand the fascination with raw violence and generally stay away from television programs or movies in which blood rather than sweat or tears are shed. Ordinarily, then, I would have switched the channel as soon as the first wave of gory Squid Game eliminations took place. Instead, I remained watching and more or less binged the entire series. I can’t deny that I found the show intriguing and compelling, but why I – and millions of others – did, I think, is worth giving some thought to.

Maybe, in the first place, it’s because we can relate the often unfair and unpredictable situations the vulnerable players experienced in their lives with our own, even if we did not or ever will reach the level of desperation they all did. To some extent, the challenges we face on a day-to-day basis parallel, in many ways, those that brought the participants to the playground – or, more correctly, killing field – and are faced with having to confess that the drama of Squid Game is not entirely unlike what many of us routinely confront and deal with.

We most likely would react differently if Squid Game was more typical of the combat-to-the-death genre, the ones in which those in the arena are prisoners or unwilling participants. Instead, the Squid Game contestants have willingly agreed to enter the competition, baited by the chance to win a once-in-a-lifetime paycheck that is promised to the winner. Surely, just about everybody knows or heard of someone who is about to go bankrupt or have their home foreclosed. In a sense, from the comfort and security of our homes, we can indulge as voyeurs of a sort, and wonder just how severe a malady desperation can be. Can those we know – or, even ourselves for that matter – ever descend to that level? That question is what keeps viewers watching.

In what I found to be a very clever “twist”, those still alive after the first few games took advantage of the opportunity to bring the competition to an end once they fully realized the stakes for which they were playing, and were returned, emptyhanded, to the lives they had been struggling to escape from. But it did not take long before they were, once again, face to face with a brick wall from which they could not pull themselves over. So, with no other choice and, in truth, very little to lose, most of them returned to the playground in the hopes of making it to the finishing line in one piece and claim the waiting windfall.

It was pointed out that the show premiered at a time when household debt, both in South Korea and in the US, were at record highs. It’s fair to assume, then, that both countries, as well as others throughout the world, were finding this to be an overly stressful period, and viewers were indeed able to relate to the introduction given by one of the show’s masked villains: “We are simply here to give you a chance.” For anyone whose world is coming apart at the seams, a pitch such as that is truly difficult to walk away from.

The surroundings that the participants found themselves in evoked a primitive, every-man-for-himself spirit, with no real penalty for cheating, double-crossing, or lying. But while this may not be quite the world we wake up to every morning, it would be less than honest to deny that elements of such behavior are not unheard of, even by seemingly well thought of and upstanding individuals. Squid Game, then, can be viewed as either a mirror or window; in either case, the images are more than a little troubling.

To its credit, the show does not ignore inequalities that exist within many if not most societies and have yet to be corrected. The indifference shown to an elderly participant, for example, plays an important role in the proceedings; that this prejudice and disrespect is instantly recognizable demonstrates how intelligently the matter was brought before us. Some of the female players, moreover, are mistreated by some of the more brutish male competitors, something not at all unheard of even in the most civilized of societies. And even the professionals that have been drawn into the competition find ways to cut corners or gain unfair advantages over their competition, a clear statement that even those educated and familiar with a sense pf achievement are not immune from having their lives turned upside down.

A second season is currently in the planning stage, which, I think, would be a mistake. Not because of the so-called sophomore jinx that television programs frequently face, but because there is nothing more than can be said. Squid Game ably made its point about the dangers of an overly capitalist world and left viewers thinking long after the final episode. And while there are still some playground games that can be similarly exploited, the level of intensity will not be the same. The show should quit while it’s ahead and not diminish the accolades it rightly earned for superior programming.