I will never forget 1977.  The year our little country stepped up and took its place on the map.”

Amidst the 18,000 attendees of the massive bipartisan Israel love fest known as the AIPAC Annual Policy Conference in Washington DC I had the honour of meeting the one man who stood out, Tal Brody. Brody helped snap the country out of its deep funk following the 1972 Olympic Massacre and the 1973 Yom Kippur War. And no he isn’t a politician or military hero. He was captain of the Maccabi Tel Aviv basketball team that captured the 1977 European championship, and the heart of a nation. 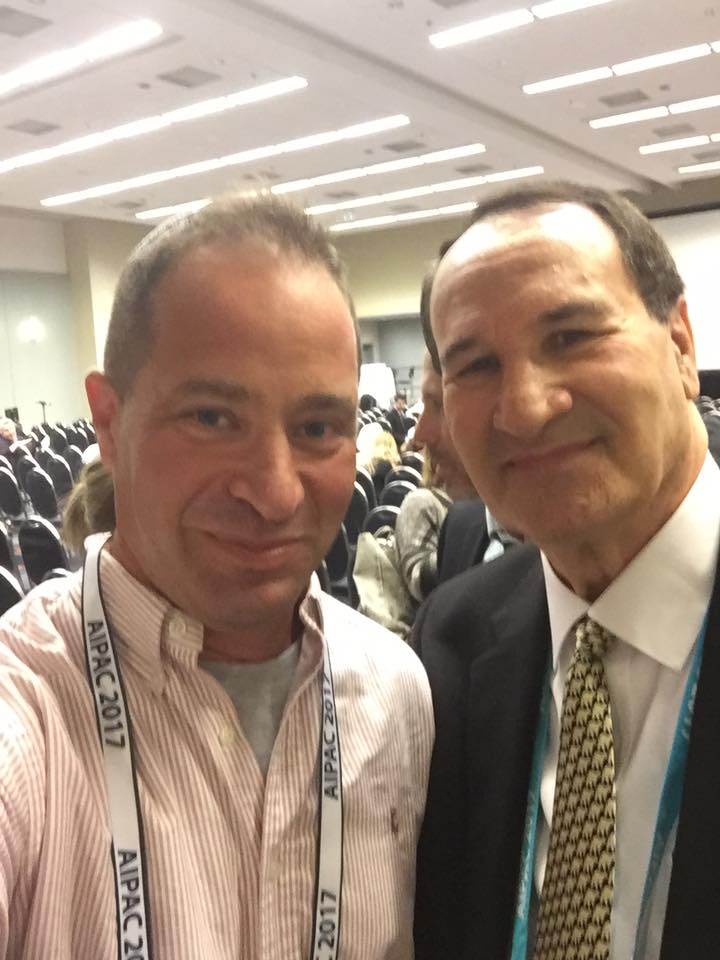 The “Miracle on hardwood” reverberated around the Jewish world.  After perhaps the most significant game of the title run, Maccabi’s defeat of the Soviet Red Army team in an emotional and politically charged semi-final, famous “Refusnik” Anatoly (Natan) Sharansky asked his KGB interrogators if they had heard the news.   An Israeli team playing behind the Iron Curtain made the local Jews so proud. They were playing the giants on their own turf, and winning. It wasn’t just to Israelis but to Jews worldwide that Maccabi made such an impact.  Dr Michael Oren, Israel’s former ambassador to the United States, observed,

1977 put Israel on the map diplomatically, with the start of the peace process with Egypt, warming relationship with the USA and then along came “that game.”

At the AIPAC conference we were privileged to watch, with Tal Brody, the AIPAC premier of “On the Map” the film about “that game” when Brody captained the Maccabi Tel Aviv basketball club to the European Cup championship, the first major international sports championship for the young state. The audience both young and old were moved to great emotion. We learned how before the game the coach screened the film about Entebbe rescue, which had taken place the previous year. The message was simple. Entebbe told the team that having a state means that the time is over in our history and no one will tell Jews or Israel what it can or cannot do. It was clear message the state of Israel will send planes to free Jews in distress wherever they are, from Uganda to Yemen, to Iraq to Ethiopia.  To show such an inspirational movie about taking your destiny in your own hands just before the big game motivated the players to give their all. The day of the game the coach said, “Tonight Israel (and Jews around the world) are watching you. If you win, you will win glory for life, and the Jewish people and our State.” The game was so important for the nation that Rabin delayed his resignation speech in order not to disrupt the live transmission of the final!

At the end of the emotional semi-final when the Israeli team trounced the seemingly invincible Soviet team, made up of players who had defeated the vaunted Team USA for the Olympic gold, Brody uttered one of the most famous sound bites in Israeli history. In his heavily American-accented Hebrew, he told a television commentator, “We are on the map, and we are staying on the map – not only in sports but in everything.” After the game Brody recalled that they met Prime Minister Rabin and he said:

‘Tal, I had tears in my eyes; you don’t realise what you said, how much it meant to the morale and the people of Israel – the fact that we are staying on the map, not only in sports but in everything.'”

Tal Brody stayed in Israel, served in the IDF and dedicated his life to Israel, working with Israeli kids. Heroes and role models for our youth and indeed each and every one of us are selfless people who devote themselves to something bigger that themselves.  Tal Brody has devoted his life, through sport, to the state of Israel. Brody remains sports royalty. In 1979, he received the Israel Prize, the country’s highest civilian honour. More recently, Brody was appointed Goodwill Ambassador for the State of Israel. When asked at the conclusion of his AIPAC presentation if he would make the same choice again, to leave behind the fame and fortune of an NBA career he replied,

I would still make the same decision. Knowing the experience I’ve had in Israel, raising children and grandchildren in the one Jewish state, and seeing what the championship has meant to the country, what it did for the spirit of Israel, yes, I’d make the sae decision.”