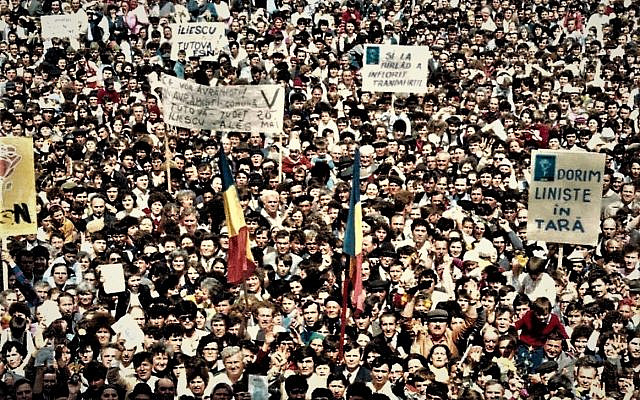 Free at last to protest in Romania, 1990 (Dan Perry photo)

Imagine arriving in a place you’ve never been that is like none you’ve ever seen. Mobsters have ruled and ruined it, erecting walls against the world. The people’s spirit nearly broke, but they’ve been suddenly set free. Disoriented yet ecstatic, suspicious and yet eager, they’re finally at liberty to speak their minds.

It is a language rarely heard elsewhere. It is your mother tongue.

Such was my arrival in Bucharest just after the 1989 revolution. It launched me on a three-decade career as a foreign correspondent and was my first stab at playing an adult. It is tempting to reflect but probably wiser to move on. Few of us are wise.

Yes, this was thirty years ago. Communists were falling like flies across the Warsaw Pact, inevitably so once Mikhail Gorbachev indicated the Soviet Union would stand aside. But in Romania, the cartoonish Nicolae and Elena Ceausescu were hanging on.

Riots had erupted in the provinces and on Dec. 21 Ceausescu stepped onto the balcony at Communist Party headquarters to address a hostile Bucharest crowd. It did not go well, and the dictatorial duo ended up fleeing the building by helicopter and being shot to death after a kangaroo trial on a military base on Christmas Day. I remember hearing about this on the radio from faraway.

As with other revolutions, including the more recent Egyptian one of 2011, the military essentially abandoned a leader who had ruled by the sword, yielding a combination coup-uprising. Strange street shootings continued for days and resulted in about 1,000 deaths, convincing many people that the new National Salvation Front government staged everything to create the impression of a revolution. Unusually for conspiracy theories, serious people did not discount it. That’s the Balkans for you. With protesters in Bucharest

Luckily I was available to help sort it out, thanks to unemployment and a linguistic gift from my Jewish Romanian parents. Having applied in New York to the Associated Press, whose international editor spotted “Romanian” on my resume, I soon found myself in Bucharest, setting up a small bureau.

Back in Philadelphia my parents were chagrined: they had not escaped Romania by the skin of their teeth to see their idiot son go running back for a position as a scribbler. I was destined, in their minds, to be a great computer engineer. In their perspective, they had in any case never been Romanians but Jews, like the Jews of any country. That is not the standard American Jewish narrative, but it makes sense once you go there. 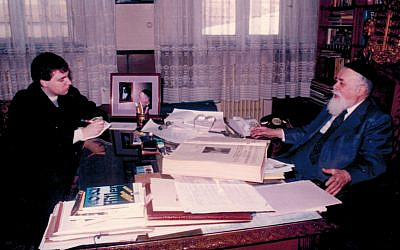 The Romanian Jewish community had numbered almost a million before World War II, when half of them were killed. Most survivors found a way to leave (many were essentially bought by Israel). A few thousand remained, led by Rabbi Moses Rosen.

I interviewed this great survivor and found him much concerned with renascent anti-Semitism. It was a paradox: when not shooting Jewish poets the communists had kept a lid on nationalism, and that, at least, was pretty good for the Jews.

I was amazed to discover the tales of anti-Semitism to be somehow true — but now applying in reverse. Shockingly many people believed Jews had mysterious powers at pulling every string worth pulling in the world. But these “philo-Semites” rather liked it: Romania had been trashed by criminals and needed formidable, clever friends.

Especially they admired Israel. “The Jews turned their miserable desert into a beautiful garden,” they would wistfully recite, with tuica (plum brandy) always at the ready. “Whereas we, the Romanians – we have turned our garden into a desert!”

Invited for a personal meeting with the government spokesman at his office at the Intercontinental Hotel, I was advised to bring tribute in the form of Johnny Walker Black. With elaborate gestures he bade me to sit, poured us both a glass, lit himself a Kent and looked me carefully up and down.

“Are you … Mosaic?” he asked. I admitted it was true. “I knew it!” he rejoiced. “It could be no other way. So young, yet in such a powerful position!” Journalists were much admired there and then; we were considered politicians, but more devious, which was good. Optimism and cynicism seemed to pleasingly converge.

I was distracted by something even more absurd: his secretary was staring at me, as if in a trance. Her face glimmered with tiny gold sprinkles. I heard the Lambada blasting somewhere in the still-completely-bugged hotel (on one occasion pizza arrived without an order; we had just discussed the possibility, and security had kindly made it real).

Another young woman completely confused another American Jew by asking for his “map.” She was forced to explain that “everyone knew” there existed a map possessed only by the Jews that contained the secret instructions to domination of the world. He was shocked and offended at first, but in the fullness of time found the whole thing possible to overlook.

Such an innocent time! We did not know of the coming devastation in Yugoslavia, the Internet upheavals, 9/11, Afghanistan and Iraq, the Great Recession, disruptive global immigration, class warfare in the West, the global scrambling of minds and alternative facts. We thought – everyone thought – that progress was at hand.

Journalists were to face beheadings a few years down the line, but our adventures were more mild in these dying days of innocence. 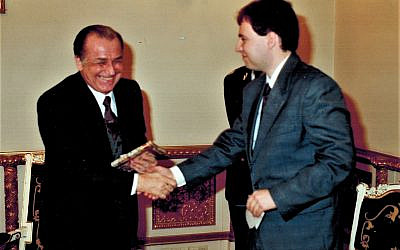 Iliescu, the old rascal, was amused

Once day I was mistakenly beaten up by police and compensated with an interview with President Ion Iliescu, who told me lies and proceeded to trick me by airing the entire discussion on state TV. He was apparently proud of it!

For months people would stop me in the street, begging for favors from the big man. I tried at first to explain, but gradually came to believe it was more cruel to deprive them of faint hope.

Traversing a village in Transylvania, my rickety VW was mobbed by a few dozen peasants in a gypsy village. “Give us slippers!” shouted one. “Cigarettes!” implored another. Their chieftain shoved his way to the car. My friend and passenger Chris, also a foreign correspondent, bravely rolled down the window. The hardy Brit knew but a few words in Romanian, yet had mastered the controversial president’s name. Upon hearing it, the peasant nodded with angry emphasis.

“Yes, Iliescu,” he said. “Iliescu and his parliament, they have, each of them, 20,000 lei. Maybe 30,000 lei. And we, the impoverished, what do we have? We have a (male reproductive organ) in our hands!” A seasoned journalist, Chris knew how to tease out the essence of things. “Iliescu?” he pressed. “Yes!” roared the peasant leader. “Iliescu’s (male reproductive organ)!” With that, the sea of peasants parted and we continued on our way, to meet the nationalist mayor of a major Transylvanian town. 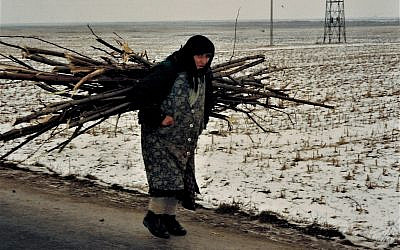 In our interview I questioned his bureaucratic battle against the use of the Hungarian language in the public domain. “This is not too democratic,” I said. He regarded me as one regards an imbecile, and then described the evils of Romania’s Hungarian minority and its paymasters across the border, all intent on stealing Transylvania.

“Every year these Magyars search their land for the most beautiful young women, who are brought to a special school in Budapest and trained in the arts of seduction,” he explained. “They are then dispatched to the finest university campuses in the West to identify and convert the future Western leadership to the cause of a Hungarian Transylvania.” I tried to respond in kind: “As a student, I had no idea what kind of danger I was under.” The mayor eyed me with disdain and drily ended the discussion by saying: “Now you know.”

He was a very strange man, and today I’d call him dangerous. But we were less skittish back then. Putting aside the business with the Magyars and the map, most people believed in a common set of facts and in the same laws of physics. You did not have significant populations simmering with hatred for the press or higher education.

We did not appreciate it for the rare moment that it was, just as youth everywhere and always tends to take its joys for granted. 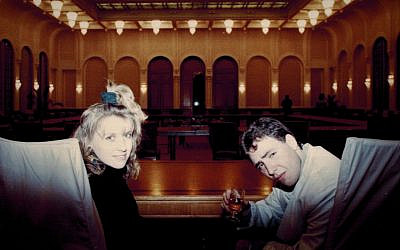 Occupying the Ceausescus’ seats at their villa

I have visited Romania since, and things have steadily advanced. Some people made great fortunes; beautiful old towns have been spruced up. Corruption never goes away, but the president is a liberal ethnic German, which is nice. The desperation and wackiness are mostly gone, but so are the dreams.