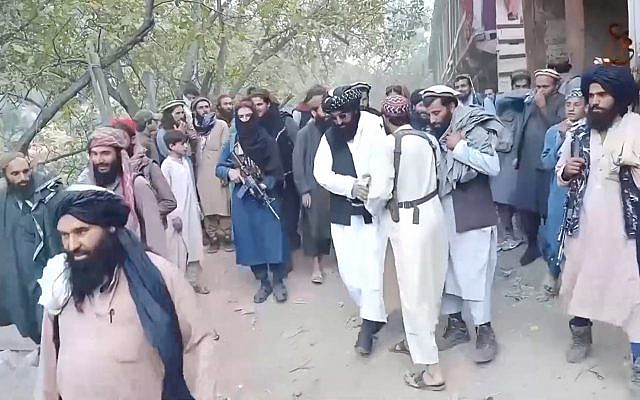 Taliban’s jihad spreads to Pakistan. Having lived in exile for two decades hiding from the United States’ “war on terror”, it is “pay-back time” for the Taliban, now ruling in Afghanistan. Only, the beneficiary is not Pakistan army and intelligence that hosted them and facilitated their return to Kabul.

As expected, the Taliban is now seeking to destabilise Pakistan’s democracy empowering the Tehreek-e-Taliban Pakistan (TTP) that is battling Islamabad, working to launch a ‘jihad’ in Pakistan.

A report in The Friday Times of March 13 showed hand-written leaflets distributed by the TTP in Afghanistan seeking donations for waging ‘Jihad’ in Pakistan, where it is outlawed. These ‘donations’ are being sought in Afghanistan’s Khost and Kunar provinces, where the group has managed to remobilise following the Afghan Taliban’s return to power. Pakistani media reports a national drive in Afghanistan to raise money for this venture.

Journalists from Pakistan’s Khyber Pakthuknwa province have reported that the TTP is raising funds from southern Afghanistan. The social media is awash with their circulation, causing concern among the local people.

The “pay-back” may be a trickle in monetary terms, coming as it does from an impoverished government in Kabul and people on the border with Pakistan who are worse off, having seen no peace for half-a-century. Under these circumstances, it is more likely, extortion, from those running businesses in market place as well as creative “taxation” on mines and other industrial activity. What really counts is the Taliban-TTP co-existence and collusion at Pakistan’s expense and also that of security and peace in the region.

Both are rigid Sunni movements that believe in violent “jihad” and are intolerant of other points of view-even those that are Islamic.

More than the money, the cause of concern to Islamabad is the rise of terror attacks across Pakistan attributed to the TTP in recent months, confirming that not only the TTP, but other terror groups are also reassembling in Afghanistan.

In 2021, Pakistan experienced a 56 per cent increase in violent militant attacks from the year prior. At least 388 people died and another 600 were wounded in terrorist attacks in Pakistan in 2021, according to Islamabad-based think tank Pakistan Institute for Conflict and Security Studies (PICSS).

Pakistan’s Interior Minister Sheikh Rashid has acknowledged that the TTP had ramped up its attacks across the country after a brief month-long ceasefire that collapsed on December 9, 2021. Efforts to reach peace pact since, with the help of Wazir, Mehsud and Dawar tribes from North and South Waziristan have failed.

Thus, an embarrassed Islamabad that advocates the Afghan Taliban’s cause globally, urging the latter to rush humanitarian aid, is having to deal with the Taliban despite their tacit support to the TTP.

For the first time early this year, Pakistan issued a formal statement charging the Afghan authorities with allowing terror groups on its soil to operate. Kabul promptly denied the charge.

The hope was, with a new friendly government in Afghanistan, Pakistan would get more help than in the past,” said Michael Kugelman of the Washington DC-based Wilson Center in an interview with FRANCE 24. Instead, “there are signs of intensified security risks. We’re seeing a resurgence of the Pakistani Taliban, as well as Baloch separatist groups intensifying attacks,” he noted.

The Pakistani accusation of Afghan soil being used for cross-border terrorism came days after a UN terrorism monitoring report said the Taliban had failed to take “steps to limit the activities of foreign terrorist fighters in the country”. The report, by the UN Security Council’s monitoring team for al Qaeda, the Islamic State (IS) group and their affiliates, noted that, “On the contrary, terrorist groups enjoy greater freedom there [Afghanistan] than at any time in recent history.”

However, in a Twitter post, the “Islamic Emirate of Afghanistan” –as the group refers to its government, which has not been recognised by the international community –“strongly” rejected the report. “Afghanistan is witnessing exemplary security since the Islamic Emirate regained full sovereignty over the country,” the statement noted.

To the chagrin of Islamabad that had hoped to effectively tackle the TTP once the Taliban took Kabul, the new rulers have washed their hands off saying it was Pakistan’s “internal matter.”

Pakistan  in the past, it was able to partially tackle the TTP fighters hiding in Afghanistan during the earlier regimes in Kabul with the American intelligence and the US providing drone and missile strikes. Post the withdrawal of NATO forces from Afghanistan, targeting the TTP is no longer an American priority. Pakistan cannot risk any action across the border –which is disputed and has been a source of tensions ever since the Durand line was drawn by the British Indian rulers in agreement with the then Afghan king, to demarcate their commercial interests. The tribes of “Pashtunistan” who consider this line as a colonial relic which divides their homeland, do not support Pakistan’s army presence here.

This is also the part of the border where the Taliban soldiers have clashed with the Pakistani Rangers when the latter attempted to erect a border fence in December.

“What this means is that the [Afghan] Taliban is not a seamless entity,” said Ayesha Siddiqa, from the Department of War Studies, King’s College London, says of the Taliban-TTP nexus.

She said in an interview with FRANCE 24: “Pakistan can continue supporting the Taliban, but they have little control in discouraging or convincing the Taliban to clamp down on the TTP.”

This counters Pakistan’s oft-repeated assertion that the TTP was largely a by-product of the U.S. presence in Afghanistan combined with external support from the former Afghan government in cahoots with India. If  Pakistan’s assertion was true as  Pakistani officials have often implied, the U.S. exit from Afghanistan and the return of the Taliban would limit the TTP’s threat against Pakistan.

This has simply not happened, and is unlikely to happen. For now Imran Khan will keep blaming the west for what is essentially a Pakistani creation and now puts at risk Pakistan’s democracy and security and takes all of South Asia with it. As Shakespeare summarised in Macbeth “Bloody instructions, which, being taught, return To plague the inventor” …