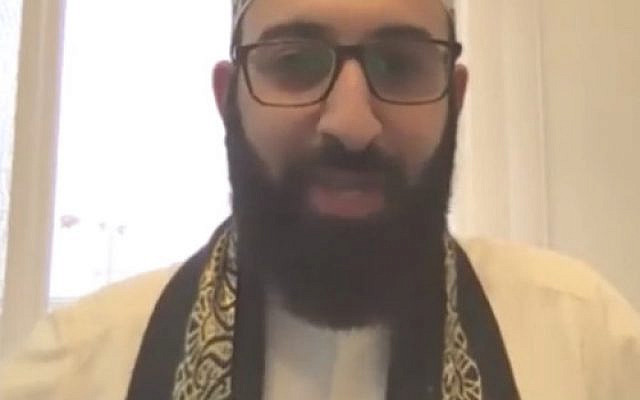 Amid the fog of Islamic extremism, is it possible to be a religious Muslim and at peace with Jews and Israel?  It’s a vital question of our time.

“Seven years ago, I’d have never spoken to you, Jonny. I was a Muslim fanatic, then G-d opened my eyes”, the Imam of Peace told me.

I had read and heard much about my latest podcast guest, but to speak to him one-on-one was to listen to a religious man who uses Islam to build bridges with Judaism, and therefore Israel.

“If you erase the Jewish connection with the Holy Land, where does it leave us? Islam just floats in the air“, Imam Mohammad Tawhidi explained to me as he unpacked the clearest message from Islamic text I’d ever heard, using faith in G-d to relay the Koran’s view of Israel in modern legal terms.

He has an unequivocal message of peace between Muslims and Jews and his solution comes from faith and identity – from religion, not secularity. Also known as the Imam of Peace, Imam Mohammad Tawhidi has an extraordinary outreach in the world, with over 800,000 Twitter followers plugged into his worldview.

In the secular west and its historical colonies with national borders, is it possible to unite all through faith? The Abraham Accords suggests so, with a more enduring key to a lasting peace.

It’s certain relations between the UAE and Bahrain are warmer than with Israel’s first peace partners, Jordan and Egypt and the Accords have been built between nations who have monotheistic faith and identity in common.

But what about the Palestinians? Where do they fit in? Is it true some Gulf Arabs don’t even regard them as Arabs, let alone a Muslim cause? And is antisemitism behind the world’s support for them?

On this, Imam Tawhidi said, “G-d tells me in the Holy Koran that He assigned this entire region, again, region, not land, so the borders of Israel today are not the region. They’re a part of the region. G-d tells me He gave the Holy Land, Sinai, the Jordan River, you name it, He gave it to the Children of Israel, He gave it to those who He had a covenant with and He said, “enter the land and do not turn your backs on it, so this is a Land Title”.

One can’t underscore enough the counterintuition and bravery with which Imam Tawhidi speaks and he’s had to debate his position on many issues with his own co-religionists to become vice-president of the Global Imams Council.

He’s even been “accused” of being a Zionist, but he says he doesn’t need to be a Zionist because being a Muslim is sufficient to uphold and support Israel’s Jewish existence.

“We’re debating politically who Israel belongs to: is it the Jews or the Palestinians? But I know the Holy Koran is the most superior text on Planet Earth, there is no Balfour Declaration, Oslo Accords, Abraham Accords, whatever you want to call it, these all come later. The Koran tells me this land belongs to the Jewish people. So I now have two options: either, I go with G-d or I go with the politicians. I can’t go with the politicians, I have to go with G-d, there’s no other way. People will say, “that’s Zionism!”, but that’s not Zionism, it’s me being a Muslim”.

This episode has been well-received right across the world with audiences in 86 countries and replies and reactions, mostly positive from Muslims, Jews and Christians on every continent.

That’s not to say there hasn’t been any pushback because there has, even from some of my Jewish listenership. But trust can only grow from listening and with dialogue and I’m very happy to have placed this testimony from Imam Tawhidi within it.

As time moves on, the significance of this will be noted to have emerged in the years following the Arab Spring and during the growth of the Abraham Accords.

Maybe the Middle East is changing at long last.

About the Author
Following a 30-year career in broadcast journalism, Jonny Gould’s now a prolific podcaster, fast emerging as Anglo-Jewry’s go-to-interviewer. As a news commentator at Sky News and BBC Radio, Jonny frequently raised concerns on what he saw as the new threat from the hard-left led by the British Labour Party. From 2016, he earned a reputation for outspoken views rarely voiced on UK TV. In response to the unchecked and sudden rise of antisemitism Jonny Gould’s Jewish State was launched. The podcast serves as an archive and library of one of the west’s oldest Jewish communities and is a window into the dynamic of the day for world Jewry. Jonny is now also a presenter at TalkTV.
Related Topics
Related Posts
Comments