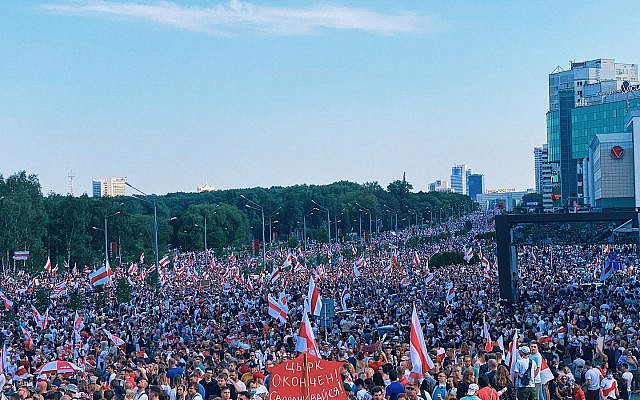 What is happening in Belarus these days through the eyes of my friends, relatives, and social media

However, it is in Belarus where these protests are a unique and unprecedented phenomenon that I believe will mark the end of a totalitarian regime which has been antagonizing its people for 26 years. No wonder, there is a joke that Israel had more Belarussian presidents than Belarus ever had (Weizman, Shazar, Peres).

I have followed the protests closely for the last weeks over social media and talked to my relatives and friends from Minsk.  But apparently, not everyone knows what’s happening in Belarus right now, especially after a friend from Ramallah commented that on Arab media the discussion is mostly about the pretty Belarusian women in pictures of the protests.

To bring you up to speed: on the 9th of August, Belarussian President Alexander Lukashenko held elections that have been considered unfair and rigged by the EU, UN, and the USA but most importantly by the Belarussians themselves. Lukashenko’s opposition was jailed prior to the elections, and his only remaining opponent, who doubtlessly won the majority of votes, was not recognized and was forced to flee in exile.

It is not as if Lukashenko hadn’t done this before, it is the sixth election mandate and he even changed the constitution in 2004 to be able to become a president for an unlimited number of mandates.  But this time, his lies were too obvious and too ugly, which broke open the people’s patience.

The stories I heard from different people and the footage I saw on social media terrified me. For many days, innocent civilians who intended to go to peaceful demonstrations ended up in cells, tortured, raped, and humiliated by the military forces of the government.

Unlike me, sharing a picture from our Jerusalem Balfour protests with any sign I want, my cousins in Minsk feel they are in danger by even assuming that someone might be eavesdropping on a conversation. Needless to say that independent journalists who have survived are working on the issue from abroad.

“Many visitors come here and say: “Wow, your country is so clean. You have a great president.” But is it him who is sweeping those streets?” Nastia (34), who is using a pseudonym to protect her identity amid the protests.

Corruption is everywhere: all the factories that once were state-owned belong to the President’s cronies. Unemployment in the periphery is high, causing more people to seek solace in the bottle. Nearly 19 percent of Belarussians have an alcohol use disorder, and 11 percent with alcohol dependence, according to a 2018 report by the World Health Organization.

Unlike protests in Bulgaria, where people throw bottles, fireworks, sharp objects, and anything else at the police, in Belarus crowds cross the roads on a green light, take off their shoes when standing on benches. They don’t even block the bicycle lanes during protests. It is remarkable to see those streets after the protests where thousands had just marched and didn’t leave any garbage behind.

Besides the good manners of the Belarussian protestors, there is another reason for this unique attitude of the protests. It is the principle of peaceful and entirely non-violent approach which came with the bitter experience from all those years of oppression. Belarusians have tried to protest before but people were attacked straight away. Once, some protestors gathered just to clap and the next day, a law came out that any gathering of more than three people is illegal, and clapping in open public spaces is illegal too.

Another turning point in the minds of people was how the President dealt with the COVID19 crisis.

“He has always offended us from the TV screens, calling us sheep, but the level of insults rose. When we had our first COVID deaths, he said it’s our fault. All countries in the world protected their citizens but we had to live in fear and worry about how to survive.” Nastia told me.

While even Russia canceled their annual Victory Parade on the 9th of May, Lukashenko didn’t cancel his, sending a message that he doesn’t care for the opinion of the international community.

“Of course we don’t expect to find someone who will take us out from the mess he caused. But what we fear the most is that at the end of his life he will just sell our country to Russia and I don’t know anyone here who would like that.” my friend Kirill (29) said.

The scariest part of the reality today in Belarus is the inequity and complete lawlessness.

“You feel like you have no one to turn to when faced with injustice,” my aunt (55) told me.

“I wear comfortable underwear and shoes just in case something happens to me,” Nastia said.

There is a Telegram channel (Nexta) run by an exiled journalist, where people send their video clips with police abuse and everyday scenes from the streets. There are scenes with tanks and police paddy wagons surrounding people holding flowers; women and children creating human chains to protect the men from the police and the army. There are many happy people clapping and holding creative posters.

“The best part about our protests is also that we have no leaders and no organizational body. We just go out to the streets and when we meet others, we are not afraid of the police anymore because together we feel strong.” Kirill said.

One of the Facebook pages I follow that covers the protests is called “Tea with Raspberry Jam.” I thought it was a metaphor because it’s considered a remedy when you are sick but then I asked the admin about its meaning. He sent me a link to an interview with Lukashenko and journalists whom he keeps interrupting by offering them coffee and tea. The President tells them a story of his favorite tea with raspberry jam instead of answering their questions.

Today the world knows that even tea can be dangerous in countries run by dictators. 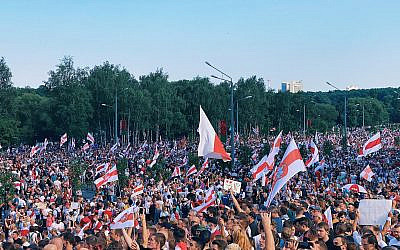 Protest in Minsk. This was the Pre-Lukashenko flag which is today used as a symbol of the revolution against him. (Kirill Parkhimchik)
About the Author
Ruth is a peace activist and among the founders of the organization "Holy Local Aliens." It is a community of locals (and non-locals) in Israel and Palestine, meeting to explore and build bridges with no ideology except friendship. They often go on exciting trips in nature or visit unique minorities in the Holy Land. Anyone is welcome to join them on their adventures! Ruth was born in Bulgaria, lived in Germany, and made aliyah seven years ago.
Related Topics
Related Posts
Comments