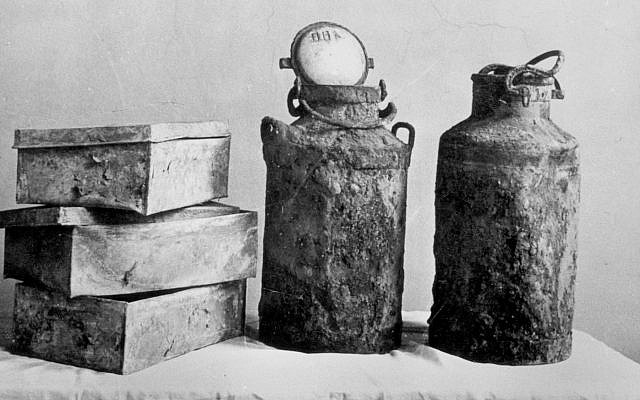 The Warsaw Oneg Shabbat Archive, the largest group of artifacts saved by the Jews in the Holocaust, was buried in these boxes and milk bottles. (Source: Yad Vashem)

How do we even begin to understand the experience of the Holocaust? How do we give our students insight into something we can barely comprehend?

“Sh’ma koleinu, Adonai, Hear our voice, O God.” Jews worldwide have prayed this daily for generations. Even God needs to hear our voices to connect to us.

Sh’ma koleinu. The way we, and our students, can connect to the experience of the Holocaust is to hear the voices of those who experienced it, both the living and the dead.

Before I began this journey, I had no idea the richness of the archive available to us. I had mostly seen the pictures taken by the soldiers, be they Germans or Allies. I had not seen the photographs taken by the Jews, the paintings, the artwork, the poetry, the diaries and writings of both survivors and victims.

The writings of the murdered astonish me: pages that were saved, hidden in walls or buried in cans, found by loved ones after. These express their experience with astounding poetry and heart.

And God saw that it was bad

In 1943, in the Terezín Ghetto, poet Otto Weiss wrote a marvelous little book as a gift for his wife’s birthday. It is called And God saw that it was bad. In the story, God hears the prayers of a faithful man and comes down to see what is happening. As God gets caught up in the net of the ghetto like a fly in a spiderweb, we get a clear idea of the frustrations of life there: the pettiness of officials with just enough power to make life miserable, the difficulty in simply living, the likelihood of dying.

And yet, at the very end of the book, we get a different view.

“No, indeed, this was not God’s work. He had come to Terezín a few days earlier, called down to Earth by the fervent prayers of Vitězslav Taussig; and here in Terezín He had seen the sufferings of His People. Now He was hurrying away – see Him over there, disappearing behind the crematorium – hurrying home, to Heaven, to take things properly in hand.

“Be patient a little while longer, wait quietly, and you will soon be rewarded. And then forgive Him, please, because He didn’t mean it to be like that.”[1]

The hope expressed in these final paragraphs. The faith that somehow remains. They take my breath away.

I used to think that every Holocaust story was the same: cattle cars and selection lines, gas chambers and slave labor camps. Lost families, lost faith, lost hope. People who survived did so by pure luck.

Many survivors would likely tell me that last is true – people who survived did so by pure luck. But listening to them, we see that there is much more to the story than this.

There were, in fact, as many ways to experience the Holocaust as people who experienced it. When we tell this history through the eyes of one who lived it, we hear about the parts of the story that the soldiers, Nazi or Ally, did not know. We hear what life was like before the Nazis came. We hear how almost everyone who survived did so because someone, somewhere, helped them. We hear not only the facts but also the feelings.

Even in those slave labor camps, where so much had been lost to the gas chambers, some people managed to hold on to faith, hope, and friendship.

Long after he was liberated, Rabbi Sinai Adler remembered a particular night he spent in the Mauthausen concentration camp.

“The previous Passover, we were still in the Theresienstadt Ghetto, where we could still hold the Seder within the family circle.…I was still with my parents, and on our table [were] a few sheets of matza as well as tea mixed with jam as a substitute for wine.

“The Mauthausen Seder was completely different…

“After the evening roll and before we went to the hut to sleep, we were allowed time to wander around the open space in front of the huts. I asked one of the chaps to walk with me a bit, and while we were walking back and forth, we recited extracts from the Haggadah by heart, as much as we could remember. A unique Seder night, without matza or wine, without a festive meal during which all the members of the family reclined around one table, but rather a Seder of walking. Our bodies were humiliated and enslaved, but they could not enslave our spirits…because in spite of everything, we felt that we were free.”[2]

Teaching through the Jewish story

When we listen only to the voices of the soldiers, we hear a shallow story. The Allied soldiers saw living corpses. The Nazis saw vermin.

There is a deeper story to be heard. The story of Jews as human beings. As we tell this deeper story, the Holocaust becomes more than a story of cruelty resisted with tears. It becomes a story of people. We begin to understand how people lived, not only how they died. We begin to hear stories of individual resilience.

The inner strength of those who experienced the Holocaust is as mind-boggling as what was done to them. The stories of individuals tell us a more complete story, including both darkness and light, than we could ever achieve by teaching the history.

There are many ways to bring the stories of individuals to our students. Books, age appropriate memoirs, are one good way.[3] Direct storytelling is another, both by listening to survivors and by telling these stories in our voices.[4] When we learn to both listen to and tell these individuals’ stories, we begin to draw nearer to an understanding of the experience of the Holocaust.

[1] Und Gott Sah, daß es schlecht War (And G-d Saw That It Was Bad), by Otto Weiss, written in 1943, Terezín ghetto, published in 2010 by Yad Vashem publications, p. 70. Otto Weiss was murdered in Auschwitz in 1944. In her introduction to the book, his daughter Helga tells us that when Otto’s name came up for transport, “he made no attempt to evade his fate, saying, ‘If I don’t go, somebody else will have to go instead.’”

[3] See Teaching the lessons of the holocaust through storytelling not allegory.

[4] See Our history can become our legacy and Building communities through the stories of individuals.