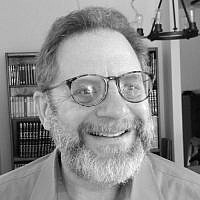 The Blogs
Avram H. Herzog
Apply for a Blog
Please note that the posts on The Blogs are contributed by third parties. The opinions, facts and any media content in them are presented solely by the authors, and neither The Times of Israel nor its partners assume any responsibility for them. Please contact us in case of abuse. In case of abuse,
Report this post.

In just a few moments, I will be leaving my home to recite the final kaddish prayer of the mourning period for my father, Rabbi Yom Tov Moshe Herzog z”l.  My father was highly regarded as a pulpit and community rabbi.  He was the first full-time rabbi of Lower Merion Synagogue, and following his four years there went on to serve Kenesseth Israel Synagogue in Minneapolis, and the greater Minneapolis Jewish community, for 35 years.  Throughout his tenure, all Jewish Federation events served only kosher food, a testimony to his devotion to the entire Jewish community, not limiting his influence and involvement to his lone Orthodox congregation.  Indeed, over time he earned a reputation as a “rabbi’s rabbi.”  This respect and admiration was perhaps most vividly evident when, at a farewell dinner in honor of my parents prior to their aliyah, rabbis of the Conservative and Reform movements, as well as representatives of all major Jewish organizations of the Twin Cities, came to pay tribute to them.  One of his colleagues, in his remarks, referred to my father this way: “More importantly than a rabbinic colleague, you became a dear friend.”

But while most knew and respected my father solely in his capacity as rabbi, I was blessed to know him as only I and my siblings could.  So in his memory, I’d like to share with you two short anecdotes, and their attendant lessons, from my childhood, giving the readership a glimpse of the other side of my father as just that, a father.

Ever since I was a young boy, I was completely enthralled by the reading of the Torah in the beit keneset.  I was blessed with a musical ear and always enjoyed singing and listening to music, but by the time I was ten years old I realized that I was missing something: I desperately wanted to learn how to lein, to chant the Torah reading.  It was no longer enough for me to sit and listen to the reader week in and week out; I needed to learn to do it myself.  No matter that I wouldn’t be reading for the congregation until my bar mitzvah.  (In reality, a boy can read the maftir, the closing portion on Shabbat morning, even prior to his bar mitzvah, and I was privileged to do so at Camp Moshava, Wild Rose, Wisconsin, when I was but a boy of eleven).  I simply could not rest until I knew the trop, the musical cantillations of the Torah reading.  One day I approached my father with a simple request: “Dad, please teach me the how to lein.”  He responded with a promise that he would indeed teach me on my eleventh birthday.  I was determined to hold him to it, as you are about to see.

On the evening of my birthday, I was, needless to say, eager and excited for what was to come after dinner.  I was about to learn how to lein!  And better yet, my teacher was going to be none other than my father!  My jubilation soon turned to disappointment, as my father informed us at the dinner table that he had to adjourn for a shul meeting (which was to take place in the dining room).  What of his promise?   What about what I perceived to be the best birthday present I could possibly receive?

As my father’s meeting began, I reminded my mother of his promise.  She calmly explained to me that I would have to wait until another evening when my father would be free.  But I had been looking forward to this night for a long time, and I was having none of it.  My father made me a promise, and I wanted to learn the leining that evening; the following night simply wouldn’t do.  I was devastated.  I went upstairs to my bedroom to cry, as I realized I wasn’t going to receive my “birthday gift” after all.  Much to my surprise, my mother knocked on my bedroom door in short order and told me that my father wanted to see me.  Unbeknownst to me, while I was upstairs crying in my room, my mother interrupted the meeting to speak to my father in private about “something important,” as she had put it.  In turn, my father abruptly ended the meeting in order to teach me the trop.  I later found out that this was a very important and timely meeting, with a room full of VIP’s of my father’s congregation to boot!  Not exactly the type of meeting from which a rabbi would, or even should, excuse himself.  But my father had made his son a promise, and he was determined to keep it.  And that night, I went to sleep on top of the world, for I had finally learned how to lein!

And that brings me to the first lesson: A promise earned is a promise kept.  As I got older and matured, I learned, time and time again, that my father was a man of unwavering principle.  For him, then, keeping his promise to me was a no-brainer.

The second story is a bit more personal and embarrassing, but worth sharing nonetheless.  Growing up in Minneapolis, I, like my siblings and most Orthodox teenagers who live in a small Jewish community, went to a yeshivah high school out of town, and returned home only a few times a year.  When I was in the tenth grade and visiting my family for the holiday of Sukkot, I decided to sleep in one weekday morning and not attend the shacharit service.  My father returned from shul to find me in the kitchen, and, after saying “good morning” reminded me to daven.  I responded that I had already done so.  “Okay,” he said.  “But whose tefillin did you use?”  I responded that of course I used my own tefillin.  He looked at me and said, “Fine.”  He began to walk away, but then added, “By the way, your tefillin is sitting on your bench in shul.”  He had caught me red handed, and there was no way out of it.  He did not appear angry.  Nor did he raise his voice.  Instead, he patiently informed me of the game plan: After he completed his breakfast, he was going to be returning to the shul to do some work in his office.  I was to go with him, daven while wearing my tefillin, and then tell him when I was finished.  We drove to the shul in awkward silence, and each of us went on to our tasks at hand, my father downstairs to his office, and me to the main sanctuary.  And he never brought up the subject again.

And that’s the second lesson:  Being a good parent, an effective parent, means, like my father did in this story, thinking outside the box.  More importantly, it means that sometimes knowing what not to say is just as important as knowing what to say.  And it means realizing when a subject need never again be mentioned.  My father inherently understood that.

Rabbi Yom Tov Moshe Herzog was indeed a “rabbi’s rabbi,” no small achievement to be sure.  But for me, even more significantly, he was, if you will, a “father’s father,” simply a man from whom I learned so much and am so proud to call “Dad.”

As I now leave to pray the last kaddish, I will add an additional prayer—that I succeed, even in some small part, to pass on these lessons, as well as so many more imparted to me by my father, to my children.  I can think of no greater tribute to his memory.  Yehi zichro baruch.  May his memory be for a blessing.

About the Author
Rabbi Avram H. Herzog received semichah from Hebrew Theological College, from where he also earned a Masters of Hebrew Literature. He was a classroom teacher for over 35 years, and served as a congregational rabbi in Milwaukee, Chicago, and Cincinnati. He has served as a scholar-in-residence in several communities throughout the United States, Canada, and Israel. Adult education is his first love. Avram and his wife Leah made aliyah in the summer of 2019 and live in Givat Ze'ev. He is proud to follow in his parents' footsteps, who made aliyah in 1996. They are the parents of two adult children, a son who lives in Boston, and a daughter who lives in Herzeliya.
Related Topics
Related Posts
Comments