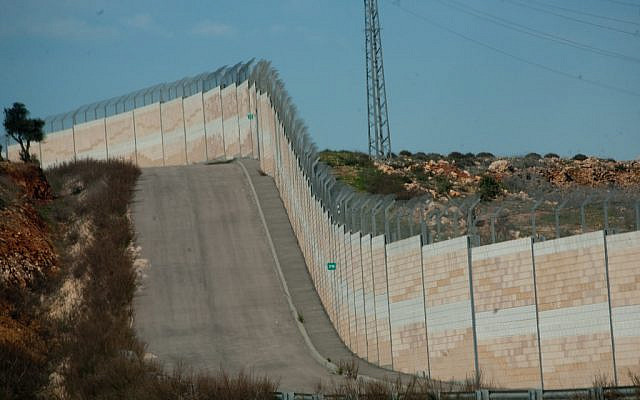 Eretz Yisrael is an indivisible whole. It is internally indivisible, especially the biblical heartland, which stretches from the Mediterranean Sea to the Jordan River and the Negev Desert to the Litani River. It too is inseparable from Am and Torat Yisrael, without any one of these three, the other two cannot exist. That being said, it is absolutely unfathomable that within this singular, whole land, one amongst the three fundamental pillars of Yisrael, there are 200-ft tall concrete walls cutting through.

Who even thought of such an idea? Was it an (alleged) racist like Rabbi Meir Kahane? Nope. Was it a radical ultranationalist like Rabbi Binyamin Elon? No. What about one of those dastardly Likudniks like former Prime Minister Bibi Netanyahu? Not quite.

The idea of walls on the 1948 armistice lines was first proposed by then-prime minister Yitzhak Rabin in 1995. In the midst of the Oslo Accords and the seemingly inevitable establishment of a Palestine state in the West Bank and Gaza Strip, Rabin sought to build a border wall to separate Israel from the future state, just as a border wall on any other border.

To avoid blaming this embarrassment completely on Rabin and the Avoda Party, it should be mentioned that this idea is as much bastardization of Ze’ev Jabotinsky’s “Iron Wall” philosophy as it is a reflection of establishment Zionism’s indifference to Eretz Yisrael outside of being a means to other, shallower ends. In the 1923 essay of the same name, the founder of Revisionist Zionism argued a Jewish state must erect an “iron wall” of defense against violently antisemitic Arabs. Surely Jabostinky, who believed steadfastly in the wholeness of Eretz Yisrael, East Bank and all, did not imagine that his philosophy would be applied to chop-up and divide the interior of Eretz Yisrael.

For that reason, it should be no surprise that the wall was finally built under the premiership of Ariel Sharon and completed soon after. Sharon, who made an entire career out of bastardizing Jabotinsky, ran in 2003 on the platform of “the fate of Netzarim is the fate of Tel-Aviv” before immediately reversing into a unilateral retreat from Netzarim and the rest of the Gaza Strip as well as the West Bank on a future date, created a de-facto Palestinian state against their own stated will. Like Rabin who proposed it, Sharon built the walls for the expressed purpose of internally dividing Eretz Yisrael among foreign political entities.

However, even as the prospect of a foreign state in Eretz Yisrael lost favor in the Israeli public and even as the names Rabin and Sharon faded from collective consciousness, the walls remain, and with enormously high approval from Israelis. It is not hard to see why. More than its true purpose of creating an artificial border within Eretz Yisrael for a foreign state, the walls are associated with their role in ending the Second Intifada. In the rampant violence that followed the Oslo Accords, the walls did greatly hinder the flow of weapons and incendiary devices from the West Bank into large Israeli cities like Jerusalem and Tel-Aviv.

While there have been ebbs and flows of widespread Arab violence in Eretz Yisrael, since the walls were built, there has not been anything resembling the horrors of the Second Intifada. Undoubtedly, if the walls were torn down tomorrow with no other actions, a Third Intifada would immediately follow.

It seems Israel has fallen into the trap of compounding a wrong with another wrong, finding yet again that two wrongs do not make a right. The first wrong was the failure to provide Arabs who want to leave Eretz Yisrael the ability to do so and ensure that anyone who rejects the state’s just law and order, namely the terrorists and organized criminals plaguing Eretz Yisrael and her residents, follow them out the door, in accordance with Rambam’s ruling that even a traveler through Eretz Yisrael must accept the Seven Laws of Bnei Noah. Instead of rectifying this wrong head-on, the government instead sought to artificially divide the Land into two inherently unstable countries at the whim of the United States, with a border wall to boot. Even as that plan failed, the walls remain, ostensibly to protect Israel’s big cities, but in reality, maintaining the imposition of division within the indivisible land.

Israel must right these wrongs by embracing its Jewish character. For the people the walls are professedly protecting Jews from, the Israeli government should give the same ultimatum Yehoshua gave the inhabitants of Eretz Yisrael over 3,000 years ago:

“Yehoshua sent three proclamations to Eretz Yisrael before he entered the Land: whoever wishes to leave, should leave; to make peace, make peace; to make war, should make war.”

There are many Arabs who want to leave Eretz Yisrael, represented in the countless number of emigrants from Gaza and the West Bank (the PA omits emigration from their population statistics) and the countless numbers of Arabs who want to but cannot leave out of social and/or financial constraints. There are many Arabs who want to make peace and remain, represented by the Arabs in Gaza protesting for Israeli work permits and driving record demand for Hebrew lessons as well as Arabs across Eretz Yisrael setting aside pan-Arab aspirations for a better future for their families within a Jewish state. There are many Arabs eager to fight, represented in groups like Hamas, the PFLP, and their advocates and allies. All of these groups should be swiftly obliged, those who want to leave given a paid and expedited emigration, those who want to make peace integrated into permanent residency and Israeli political privilege in agreement to the Seven Noahide Laws, taxpaying responsibilities, and standard national service requirements, and those who want to make war defeated and expelled.

This great lie is among the biggest issues facing Israel today, as it has been throughout the young state’s history. It is high time Israel embraces its Jewish character and tears down these internal walls, along with any suggested reason for their continued existence, through a renewed commitment to Am Yisrael, Eretz Yisrael, and Torat Yisrael. The destruction of these walls would be a great victory for the cause of Truth, a triumph against the lies of separateness between and within Am, Eretz, and Torah.