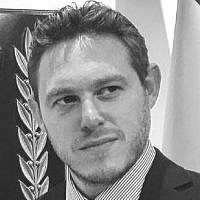 The Blogs
Jonathan Javor
Apply for a Blog
Advertisement
Please note that the posts on The Blogs are contributed by third parties. The opinions, facts and any media content in them are presented solely by the authors, and neither The Times of Israel nor its partners assume any responsibility for them. Please contact us in case of abuse. In case of abuse,
Report this post.

The Tel Aviv International Salon organization writes this post in order to correct some rather unfortunate errors and misleading accusations contained in an irresponsible and nasty blog by Michele Chabin (Feb 17th, 2016).

In her post, Ms. Michele Chabin regrettably makes a number of errors regarding our much anticipated panel event ‘Israel and the Media: Do We Get A Fair Hearing’, on 23rd February 2016. Importantly, she also omits a number of crucial facts.

At the outset, we categorically reject any accusation of ‘bias’.

For the record, Tel Aviv International Salon (www.TLVSalon.com) (facebook.com/TelAvivInternationalSalon) is the largest speakers’ forum in Israel. Since 2009, the Salon has served as a nonprofit, nonpartisan, honest broker that brings top leaders and decision makers to speak and debate in English to Tel Aviv’s community of young professional Olim & Sabras, foreign press and embassy staff. The Salons are run 100% by young Tel Avivi volunteers that are dedicated to building up our community.

We also pride ourselves on providing a broad, diverse platform with speakers from across the ideological and political spectrum. We have hosted an impressive list of leaders, from Naftali Bennett to Isaac Herzog, Tzipi Livni, Yair Lapid, Peter Beinart, Alan Dershowitz, Former CIA Director James Woolsey, ambassadors from all over the globe, officials from the PA and even Dr. Ruth Westheimer, and many other world class speakers from Israel and abroad.

At present, the role of Israel and the media and whether we receive a fair hearing, is one of the most pressing issues and which many in our diverse community have expressed a concern and interest in.

The issue has come even more under the scrutiny in light of the current wave of terror and some controversial headlines and stories reported by the press. You may even recall specific headlines from the BBC and CBS. Even the Knesset last week held an emergency hearing looking into the matter.

In determining the speakers for this particular panel, we had several criteria:

So for the record …

Invitations were extended to many leading members of the foreign press. Unfortunately, they were declined because those journalists would either not comment on the matter publicly, were unable to attend due to other commitments, were not prepared to travel from Jerusalem, or just simply did not respond in time.

So, it was certainly not from lack of effort or trying!

It is true that a personal invitation was not extended to Ms. Michele Chabin to participate as one of the panelists. In any event, we are honored with the panelists who are participating, all of whom are of the absolute highest level, including Charlotte Halle, the Editor of Haaretz English, who is one of the most respected journalists and media professionals in Israel and who has covered the conflict and worked with international press (including Haaretz’s official partnership with the New York Times), and therefore most capable of commenting on the issues at hand.

We are certain that this will be a fair, balanced and professional panel, and invite all to attend (https://IsraelMediaTelAvivSalon.eventbrite.com) and see for themselves, after all, this is a debate and not anything else as Ms. Michele Chabin unprofessionally insinuates.

Following publication of the event, Ms. Michele Chabin has repeatedly insisted on being invited as one of the panelists.

Had she approached us respectfully in private, instead of waging a public relations crusade for personal attention, perhaps we would have considered favorably extending an invitation for her to join the panel, despite the fact the program was already finalized. We also note there are a number of other panels being held on this subject matter by other organizations, yet she has chosen to unjustly attack only us.

It also did not exactly help Ms. Michele Chabin’s cause by publicly disparaging our organization on Facebook as “some yuppy tel Aviv group.” That is not only wrong, but grossly offensive to the 50,000 young men and women from a multitude of nations, backgrounds, religious practices, professional fields and political points of view, who are part of this incredible and vibrant international Tel Aviv community.

Notwithstanding, we still extended an invitation for Ms. Michele Chabin to attend our event, where she would have an opportunity just like everyone else in our community, to participate in the discussion and Q & A, and make sure that her voice is heard. That she has chosen to reject this offer and instead pursue her own media campaign, is rather unfortunate and a wasted opportunity.

Importantly, Ms. Michele Chabin made another crucial and sloppy error in her blog piece attacking us, which we hope does not reflect her work for other publications.

TLV Internationals is the largest Olim community organization in Israel. They coalesce these young adult voices into a unified community and platform for action for the benefit of Tel Aviv and all of Israel. TLV Internationals hold a diverse number of activities and is currently even working on a Bill before the Knesset, ‘Yom HaAliyah’, creating a new national holiday to recognize Aliyah as a core value of the State of Israel and the crucial contribution that Olim have made and continue to make for Israeli society.

Ms. Michele Chabin has not only chosen to publicly attack our organization, but the incredible community of hardworking volunteers

Nonetheless, our offer for Ms. Chabin to attend this very timely event and engage with the speakers and Salon organization in a respectful manner stands. We very much hope she, and everyone interested in the topic, will attend.

But as they say, ‘the show must go on!’ And we are certain this will be an exciting, professional and balanced panel, on what is a very important and relevant topic.

Ps, there are only limited number of tickets still left, so please register here!

Jonathan Javor is the volunteer Director of the Tel Aviv International Salon. A former parliamentary and foreign affairs adviser to MK Otniel Schneller, ran the English election campaign for the Likud, and served as an adviser to Tel Aviv Mayor Ron Huldai on matters regarding Olim and their integration into Israeli society.

About the Author
Jonathan Javor is the volunteer Director of the Tel Aviv International Salon. A former parliamentary and foreign affairs adviser to MK Otniel Schneller, ran the English election campaign for the Likud, and served as an adviser to Tel Aviv Mayor Ron Huldai on matters regarding Olim and their integration into Israeli society.
Comments